ONCE upon a time, as a novice hi-fi enthusiast, I was happy to plug my audio components into any old wall outlet or use a cheap power strip. The thought that the AC supply into my home could play a pivotal role in my system’s performance barely crossed my mind… until, in the mid-1990s, when I discovered “audiophile grade” power conditioning and filtering devices.

Since then, there’s rarely been a time when my hi-fi system was not hooked into one such device or another, from the early PS Audio Power Plants to Pure Power’s AC regenerators a few years ago. They had a significant impact on my system’s performance, but lacked endurance. Finally, I settled for a Malaysian-made product, a balanced isolation transformer called the AVIA Powertrans.

I thought that was it – the Powertrans was plugged into a dedicated 32A spur, and whatever the voltage swings in my house, I could ensure what went to the hi-fi system stayed in a narrower band. The Powertrans wasn’t current limiting, and it kept noisy things from entering the system. What, I wondered, could improve on this? Then came an old friend, Frankie Voon of Frank Acoustics, to show me just what!

Voon is no stranger to the Malaysian hi-fi scene, having made his presence felt in the late 1990s, when his PiPit phono stage provided a bargain option for those affected by the financial crunch. He’s maintained a reasonable profile since then, with different iterations of the phono stage and a power product or two, but what he wanted me to try this time was something more ambitious… in terms of price, at least.

The new product was a hefty piece of metal that looked like a heavy-duty power amp – its designation is the Frank Power Bank Storage (FPBS). After months of delay as the demand for this product kept him busy, Voon and a couple of his handymen turned up one afternoon to install the FPBS in my system. 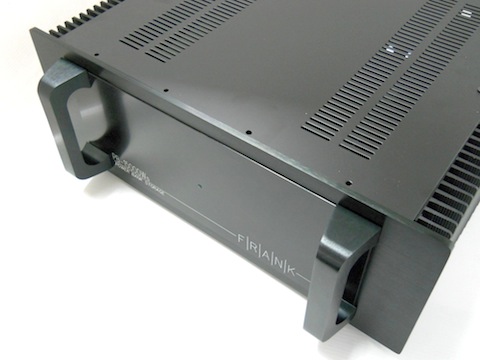 BITS AND PARTS: Install… yes, you read right. It needs to be installed. One way is to plug the FPBS into a wall outlet that shares the circuit with your hi-fi system. The other is to install it at the mains, which calls for qualified personnel.

In my place, the mains board wasn’t at a convenient location but the hi-fi system runs off a 32A spur, so Voon connected it to the outlet into which the Powertrans was plugged. Once installed and fired up, the FPBS takes a few hours to charge up, after which, you leave it be, unless you’re going off on holiday.

I’ll let Voon explain the  FPBS in his words:

“The FPBS component is a proprietary design which utilises a LED Passive Half Wave Power Generator for maintaining its charged cores in the two units of reactance-type, low loss autotransformers. From cold, it takes between five and six hours to charge up.

“Once charged, the pair of custom-wound autotransformers behave very similarly to a power bank storage which can discharge or absorb voltages in excess of 240 volts AC, single-phase, or 440 volts dual-phase, in under a nanosecond.

“The autotransformer design stems from its original purpose in UPS conditioners utilised in national electrical grids. Frank Acoustic has modified this system using a proprietary system for domestic abodes. The FPBS component is essentially a scaled-down version of this unique system for maintaining AC power to your system.”

Essentially, from what I understand, the FPBS stores current and discharges it when required by the system, within nanoseconds, for example, during transients. Voon uses an automotive analogy to describe it – “It is like a car with a supercharger and hybrid system!” Fittingly, it is built like a tank and rated at 15,000W.

Scroll to the end to read a Q&A with Voon. Meanwhile, we’ll get on with the review.

IN CONCERT: Here’s the tricky part about the FPBS – unless you want to take that leap of faith, you’d be well advised to fine-tune your system to the point where you feel you’ve achieved all possible or close. Then, you introduce the FPBS to your system.

There was a gap of a few months between my request for a review unit and when Voon could finally deliver one. When, finally, he was ready to set me up, I had done what I thought I could with my system. So, I was good to go.

Having spent a bit of time and effort over the years ensuring “good” AC power fed my system and a sympathetic environment (read acoustic treatment), I was naturally curious about how much further it could go without any major changes in components. The FPBS showed me – it wasn’t earth-shattering, but enough to take my system’s performance a couple of notches higher.

What I heard ranged from subtle to significant – better control and finer resolution of bass instruments in the former case, and a wider, higher and deeper stage in the latter. The FPBS supplemented the overall performance of the system. Transients sounded snappier in attack and the treble was crisper in articulation, while vocals, already cosy in projection earlier, took on another level of intimacy.

Along the way to fine-tuning my system, I always paid attention to pace, slam, detail and bass grunt – the FPBS enhanced performance in these areas, never once constraining the system’s dynamics. After weeks of listening, I couldn’t think of one area that didn’t showed enhancement… the music flowed without restraint or hesitancy even with the more challenging recordings I played.

Still, it bugged me that I couldn’t do an A/B in the traditional manner, so towards the end of the sessions, I disconnected my secondary system – the iPod Classic-HRT iStreamer/Pioneer A400/Mission 770 – from the dedicated spur and plugged it into a separate no-frills 13A spur, via a multi-gang strip. Now, with a little bit of effort, it was possible for a more direction comparison.

Everything I observed earlier was experienced this time to a greater extent.  – the bass sounded big but “loose” off the strip and imaging was a bit nebulous, the staging not too well defined. When I plugged the system back to the FPBS chain, the enhancement and refinements were significant. The lows snapped into tighter focus, and dispelled with the senses of vagueness exhibited earlier. The system now imaged better, the whole recording space seemingly better defined and fleshed out, while the mids and highs appeared to possess superior clarity and detail.

One thing I noticed in this test – maybe it was the quieter backdrop but the system seem to gain some, er, gain, each time I shifted from the external spur to the one with the FPBS. 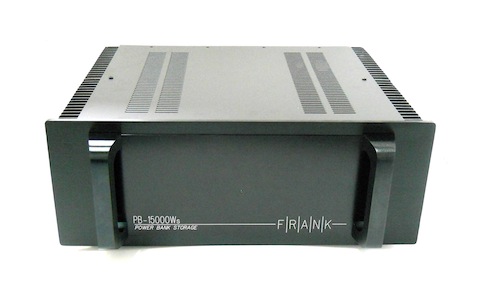 APPLAUSE: After months of living with the FPBS, and taking into account my A/B test, I now feel it’s going to be impossible not to have it in my system. It isn’t visually intrusive, but the improvements it effects in various areas are well worth the trouble of installing one in the system. Very well designed and built, too.

BUT…: Not cheap, and installation will need to be done by the experts… and it’s not really something you buy off the shelves. Takes a few hours to warm up from cold, so you want to leave it on permanently unless you’re going on holiday.

FINALE: If you’re going to buy just one power product and live with it for years, the Frank Power Bank Storage should rate very high in your short-list – in fact, I would place it in the top two. Forget about equipment upgrades, this one will show you what your modest system can achieve. I’m not reversing my installation!

Q & A with Frankie Voon:

How long has the FPBS been in production and how successful has it been?
Around three years. The FPBS itself was in gestation for almost the same time it has been on the market as it was refined and auditioned intensively before the finalised units you now see on our installations.

Tell us, in the simplest manner possible for the layman to understand, how the FPBS has an effect on the AC power supply from your wall.
For the simplest analogy of how the FPBS works in conjunction with your system, think of it as the hybrid power train system employed so stunningly on the new McLaren P1 hybrid super-car. Just like the P1’s electric drive system, the FPBS works in the background unnoticed to supplant the audio or AV system whenever the system requires it. In the case of the FPBS, it is constantly working in the background without getting in the way of the music or movie from you, as the audience. Just YouTube what the fuss is about the McLares car and you’ll get a picture on what the FPBS will do for your system.

What inspired you to work on this product? Very often, audiophiles tend to prefer to upgrade their “sonic” components that are visible, rather than rectify issues in the power supply or room acoustics that are “invisible”?
For a long time, many audiophiles have ignored the importance of a dedicated AC power line for their systems either because they have to use whatever AC outlet that’s available or simply because they do not know the sonic benefits of both dedicated AC power spurs and proper design and integration of a listening room. This has led to the development of a holistic approach to the implementation of an music/movie room with other products like dedicated power phases, cryogenically treated Magnetic Circuit Breakers (MCB’s), separate earthing spikes, etc.

Some of the ideas for the FPBS stems way back to when I looked at what affected the sonic performance of the PiPit phonostage more than a decade ago. The investigations conducted since has led to the development of the FPBS you see today.

What sort of system does it work for best?
My advice for users planning to install a FPBS in their system is the same, regardless of the system they’re using. As the FPBS will have noticeable effects across the board, the only caveat would be the user has to get their system set up properly first before committing to the FPBS.

Once you’ve set up your system (i.e. stereo imaging, timbre, sound stage depth, height and width; etc), adding in the FPBS will enhance and bring the system up to another level.

Since you recommend leaving it powered on at all times, how much power does it consume when idling – i.e., when the system is switched off. Will it significantly impact the electricity bill?
No electrical or electronic device can claim to consume nothing of your home grid once it’s plugged in. It is the same for the FPBS. The estimate for the FPBS on your electricity bill, post price hike, should be under RM7 (around US$3) a month which would be a minimal hike on a typical electricity bill.

Does it have any impact on the rest of the AC lines in your house?
There has been some feedback from users of the FPBS that their listening room’s air-conditioning is significantly cooler. Some users also report that the associated and or adjacent AV systems now display finer detail on images seen. The effect of the PB may vary depending on how your house’s electrics are wired up as it does have some impact on adjacent power lines.

What about customers from outside Malaysia, can they buy a unit?
Yes, currently the FPBS has been shipped to Indonesia, Thailand, UK, Hong Kong, and Singapore. Feedback from users of the FPBS have confirmed the universality of the FPB’s improvements on their systems.