Why I won’t be ditching my CDs 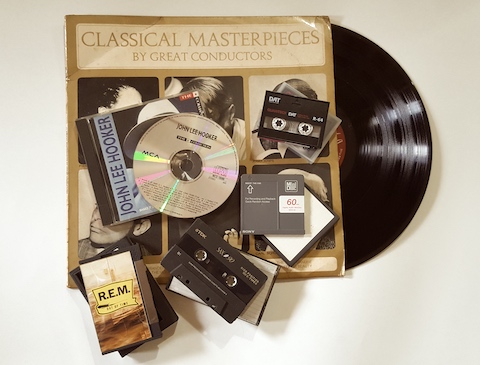 IF I may quote a cliche… the death of the music compact disc has been greatly exaggerated.

CD’s golden era, in terms of sales, may be long gone, and yes, a handful of hi-fi manufacturers have abandoned it altogether in favour of network streamers and digital media players, while computer-based audio systems (CAS) have increasingly eaten into the market. The choices out there for the digital punter of today are amazing, and at a wide range of prices.

However, I don’t plan to have a fire sale to offload my CD collection that has its roots in the late 1980s. Perhaps my wife will do that after I’m gone, but while I’m alive and sound of mind and health, the CD and LP collections stay… and grow!

I have friends who, to this day, regret getting rid of their LP collection back in dark days of vinyl, during the late 1980s and 1990s. And similarly, those who have disposed of all their CDs will, I suspect, rue the move in the coming years or decades.

But first, let me disclose my interests. My career in journalism started off as a music reviewer back in the mid-1980s. The labels would send out compact cassettes of the newest releases then – CDs were only just seeping into the market, and the CD players then were just too costly for a journo with less-than-modest means, when there was always too much month left at the end of the money.

When CDs became the norm by the late 1990s, my financial situation had improved to the extent that I was able to expand my hi-fi horizons – my system then comprised Rega Planar 3 turntable, Yamaha cassette deck and integrated amplifier, and B&W speakers – with the purchase of a used CD player (also a Yamaha, for reasons that escape me now).

The very first CD I bought was Dave Grusin’s Mountain Dance album, which I had heard on LP at a friend’s place some years earlier and liked. Another CD followed and yet another, all at a slow pace, because I couldn’t afford buying binges like I can these days! I must have bought about a dozen CDs in a year then.

By the early 1990s, on the insistence of music reviewers, the record labels had begun sending out CDs instead of cassettes, and my collection gradually grew.

Those were exciting years, mostly because of the format wars. I had my turntable, cassette deck and CD player, plus, I was able to experience all the digital formats that made a pitch for our money back then – MiniDisc, Digital Audio Tape (DAT) and Digital Compact Cassette (DCC). Not to mention Super Audio CD (SACD) and DVD-Audio. Apart from, to some extent, SACD, the rest didn’t last. I must admit to some disappointment that MiniDisc, while enjoy popularity in the recording studios, never made it to this day despite its early promise.

Thirty years down the road, almost my whole collection of music is on CD and LP… there’s a smattering of DAT, DCC, SACD and DVD-Audio and tapes stored somewhere, and I do have quite a bit of music stored on hard and portable drives. Apart from the CD player and turntable, my system also takes in a Linn Majik DS and a Toshiba laptop with foobar2000 installed and fed into a Chord Mojo DAC/headamp.

Most of my listening, though, is done on CD, followed by LP, the latter for serious and focused sessions. With CD, it’s both background music and when I’m assessing systems, or when I want to shut out the world and drift away (as with LPs).

I find the Linn a bit tedious… the process of firing up the network-attached storage (NAS), waiting a few minutes, then powering up the streamer, getting the iPad out to access the tracks and make my selection. Once done, no doubt, I can have music playing the whole weekend. But that never happens. It’s the same when powering down. And I have to ensure the Linn is detached from the Ethernet cable when the system is offline – the streamer’s port has burnt out twice due to lightning strikes at my place, even when it wasn’t powered on.

And don’t get me started on CAS, it’s as onerous.

These chores don’t include building up the list of titles, either via downloads or transferring music to my NAS via software like dBpoweramp.

As you may have concluded, and rightly, I’m not a patient guy. I want, nay, demand instant gratification.

With CDs and LPs, it’s just a matter of starting up the system, pulling out a black or silver disc from the shelves, placing disc in/on the relevant platform and playing the music.

There is a downside to LPs, despite the sound (analogue-vs-digital is not the point of this article, though), it’s still a process to set up the turntable and cartridge and keep your LPs clean. Yes, there’s a matter of physical involvement, but as I’ve declared, patience isn’t one of my virtues. It’s great fun when I have the time, and the results are mouth-wateringly delightful. But when I’m sitting at my computer and bashing out an article like this (which I am, actually), I want 50 to 70 minutes of music… even more, since I can repeat the whole CD without even getting off my chair.

Then, there’s now also the matter of my hi-fi system, which recently went through a major upgrade and made me realise my CD player is actually much better than I believed it to be – a change of tubes (yes, some CD players have tubes) and some good supports under the player helped no end.

In fact, after almost three to four years of not buying a CD, once the new system was set up, I was so impressed that I went out and got myself four boxed sets and two albums at one go. And I suspect more of this will happen in coming months.

And this, ladies and gentlemen, is why I don’t intend to say goodbye to CD (or vinyl) in the foreseeable future. I’ve got enough of my own (and there’s more out there, new and used, in the billions, I believe) to keep me going if I had to live my life all over again. For as long as the machines don’t die out, so won’t my interest in both media.