Accuphase E-470 integrated amplifier – one for a lifetime 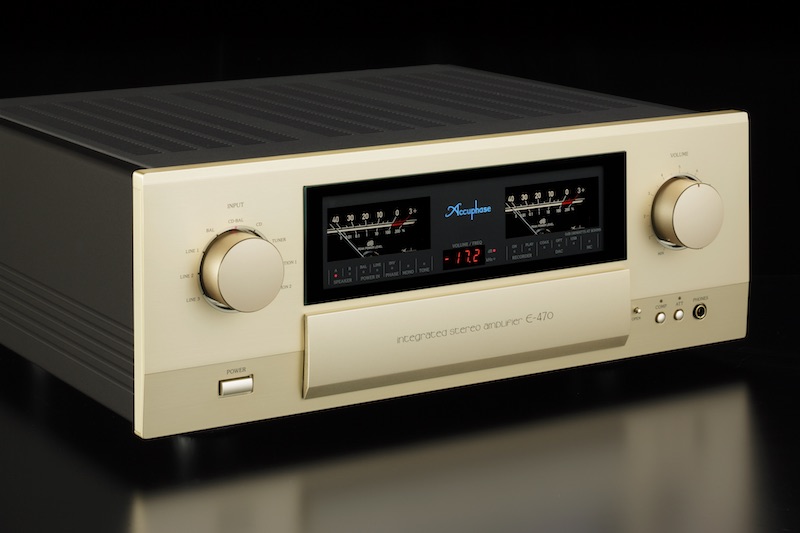 + Consummately involving performer, with a vice-like grip on bass and great resolution even when played soft; open-sounding with a big stage; always ready to convey the sense of excitement or tranquility in any given recording.
– No mute function; champagne finish not everyone’s cup of tea; list of features may be overkill for some; will need care with matching.
Performance: 9.5/10
Value: 8.5/10

THIS Japanese company, which is almost half a century old, has achieved the sort of iconic status accorded to some American names, even being tagged as the “McIntosh of the East”. While I’ve owned some McIntosh products, I’ve never heard an Accuphase in action, chiefly because, where I live, there’s been a McIntosh representative for decades, but not Accuphase.

So when word spread around recently that I had the Accuphase E-470 integrated amplifier running in my system, I was unable to answer the query directed at me: “How does it sound compared with the older Accuphase products?” Some who had listened to Accuphase amplifiers in the past had polarised opinions… either it “sounded too thin” or “it was too warm.”

But I get ahead.. a few months ago, the newly-appointed local Accuphase dealer offered to let me try one of the integrated amps he had as a demo unit. I opted for the one with the most muscle, the E-470, to drive my Magneplanar speakers. I was using the Vitus RI-100 integrated amp then, which had been doing a sterling job driving another pair of speakers I had at the time, the Spatial Audio M3 Turbo S. However, the Vitus, despite possessing an abundant level of watts, seem to be missing a little trick or two when it was paired with the Maggies. I just felt I wasn’t getting the most of the panels, and was on the lookout for other amp options.

The E-470 demo unit duly arrived and we placed it on the floor, made the necessary connections to speakers and source, and powered up the amp. A few moments later, I was picking my jaw off the ground… even at soft volume, the Accuphase seemed to be delivering things I hadn’t experienced with the other amp. 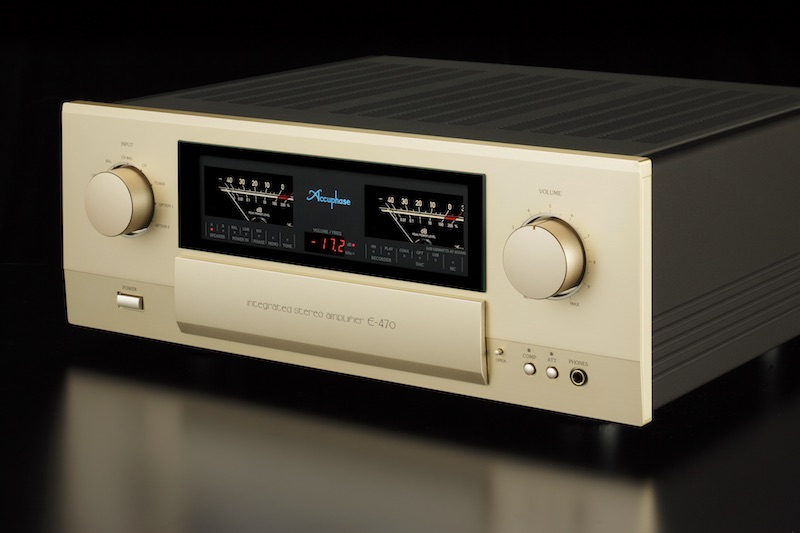 THE NITTY-GRITTY
Let me digress a bit here and get over with the tech talk. According to the website information, the E-470 replaced the E-460 about four years ago, and marked a giant step forward in sonic performance.

The pre and power sections here are well separated to ensure both perform to full potential, but each can be also used on its own with an outboard unit (ie, preamp or power amp). The preamp uses the well-evolved AAVA (Accuphase Analogue Vari-gain Amplifier) volume control – there is no variable resistor to degrade the signal path and effect any impedance shift. According to Accuphase, this results in “outstanding signal-to-noise ratio and excellent THD” with sound quality remaining consistent at any volume setting. This would explain my initial listening impressions.

The fully-balanced design puts out 180 watts into eight-ohm loads, and 290W into half that; the low impedance output stage has a damping factor of 500, and a relay of Mosfet switches provide speaker protection. According the Accuphase, “power Mosfet devices arranged in triple parallel push-pull pairs for each channel greatly enhance the ability of the amplifier to drive low-impedance loads.” That means it should be rock-solid stable with difficult speakers. 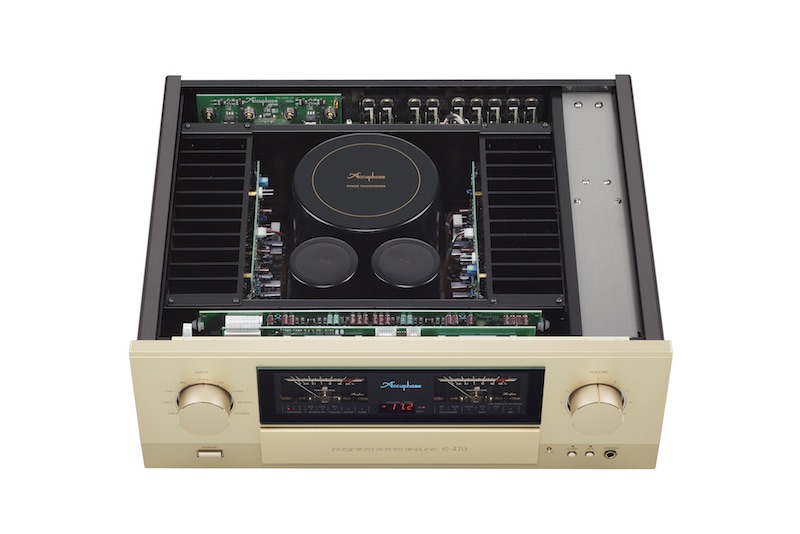 Minimalism is eschewed here – the E-470 is loaded with features that many will find useful, while some may take the view that the amp is excessively equipped. For me, there are a couple of things missing – a mute button (on the amp and remote), and adjustable trim for each input (which the RI-100 has).

Unlike the RI-100, there are useful inputs aplenty – two pairs balanced and five single-ended (along with recorder in/out). Additionally, two option boards are available to add an MM/MC phono stage and a DAC section. The solid metal remote handset allows only volume control and input selection (via either a rocker switch or separate buttons for each input.

Two features were unexpected – the phase and mono. The Phase button in the front sub-panel and switch at the back allow you to match the polarities of your source and outboard preamp or power amp, should you wish to add one of those. Note that for the E-470’s balanced circuit, pin “2” is inverted (“-“) and pin “3” is non-inverted (“+”).

Centre-indented balance and defeat-able controls for bass and treble are provided, as are two sets of speaker outputs (both can be used simultaneously, but read the manual for the impedance guide). The flip-out panel (at the press of a button) keeps things uncluttered in front.

There is a “Compensator” button to adjust the “energy level” at low-level sound (this provides a 6dB bass boost, but I never used it), while the attenuator button reduces the sound by 90% (or 20dB). 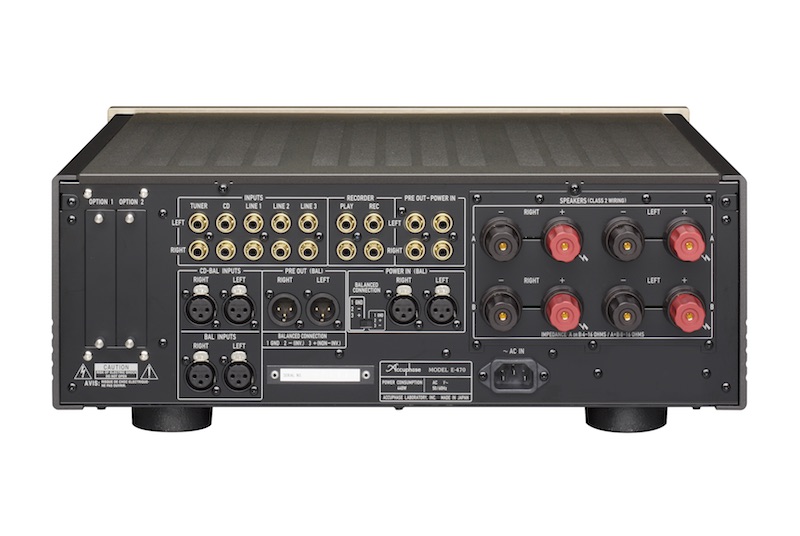 A headphone output (with volume control) is provided but plugging in will not mute the speakers – you need to switch off the speaker “A” and “B” buttons. I rarely use headphones, and didn’t have a wired one of good quality to test this feature.

Both the peak-level meter and the LED volume display can be turned off, so that only the green-lit Accuphase lettering shows – not as attractive as a certain iconic US brand, but I won’t complain about this.

As you can see, there’s quite a bit on the E-470 to keep fiddly people busy and entertained.

Like many Japanese products I’ve come across, this amp is tank-like, externally and internally – I have little doubt it is designed and built to provide decades of fuss-free service to the owner who uses it regularly.

LISTENING
After the first five minutes that startled me, I gathered my composure and let the E-470 play a variety of music over the one week that I was loaned the demo unit. Jazz, rock, pop, electronic, folk… I threw the gamut of my reference music at it, on LP, CD and digital files, played soft, at moderate volume and loud.

There was no question that the Accuphase had struck up a synergistic and harmonious relationship with the Maggies. From the detail and resolution at soft volume, to the firm grip on the lows even when blasting rock music, the Accuphase showed itself to be more than capable of involving the listener intimately with the music.

The bass reproduction with the Maggies was something I’ve yet to experience from other amplifiers. There is grunt and slam, there is superb resolution across the frequency spectrum, and a faithful adherence to the details on the recordings. The highs, on good recordings, were on the right side of seductive, and the backdrop was dead quiet, without omitting any of the energy in the recording.

But the one week with the E-470 passed too soon, and before I could get a full measure of it, it had to go back… with each daily listening session, I felt I was learning something new about the amp. Shootouts with the Vitus integrated brought me to the conclusion that it was the Accuphase that belonged in my system. A matter of synergy, undoubtedly – the Vitus seemed to gel better with the Spatial Audio speakers. 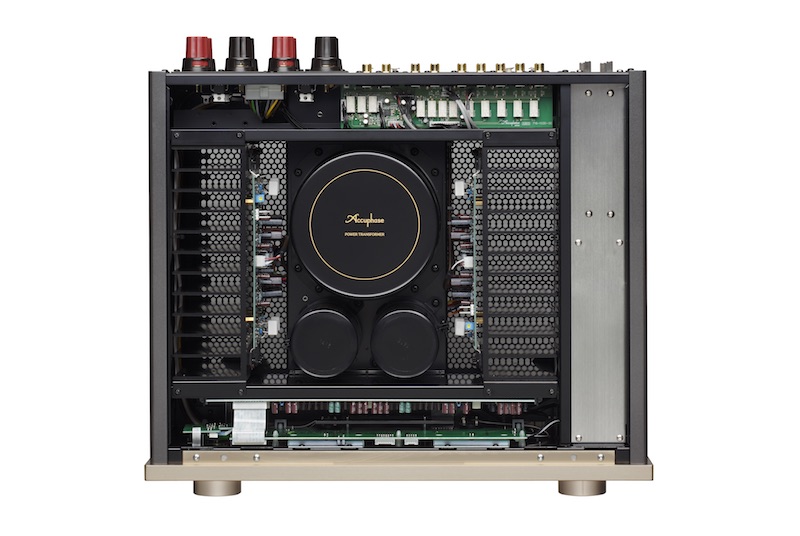 So there was just one route for me – I let the Vitus go and procured a new unit of the E-470. Right out of the box, it didn’t seem to need running in to match the demo unit… I immediately detected the same attributes that captivated me initially! And over the past few weeks, I haven’t found anything to dislike sonically about this amp. Yes, crap recordings are more obvious, but running Spotify via my set-up was seldom unpleasant… I would also attribute this to the Mojo and Sony (via Bluetooth) carrying out their digit-crunching chores with great efficiency.

On a higher source level, either with the VPI/Soundsmith/Audia set-up or with the Ayon/Sony digital path… whether it was intimate or gut-wrenching vocals, the snap of the snare drum, the bite of an electric guitar on a rock or blues track, the grand crescendo of an orchestra, or piano/violin/wind instrument passages, the amp passed the signals through with nary an additive trait, as micro-details surfaced to a level I hadn’t heard in my system previously.

When I played simple jazz/acoustic records, there was an almost tangible presence of the singer and musicians in the room, and the ambience of the recording emerged in a natural and most convincing manner. It wasn’t just with the Maggies that the E-470 delivered its magic; I had a pair of compact floorstanders for a couple of days, the marvellous Neat Acoustics Iota Alpha, and was quite blown away by how big this diminutive boxes sounded in my system – the Accuphase extracted the best of these speakers, even though I was advised that small amps were a better match for the Neats.

One final thing – I went through a variety of speaker cables, and a couple of weeks before I sat down to write this review, I managed to procure a pair of Japanese-made wires which, back in the 1980s, were marketed by Monitor Audio and Polk Audio (as Cobra) and have attain cult/mythical status. These took the performance of the E-470-1.7i to another level –  nuances were better revealed, there was an on-the-edge quality to the bass that will shock ribbon panel sceptics, and more clarity and recording textures surfaced across the mids and highs.

THE LAST WORD
The E-470 is approaching what is conceivably its winter phase; I’m told the next version may be due in the not-too-distant future. However, I decided go with this review anyway – just what more Accuphase can achieve at this price, I can’t envision. So this is quite possibly the last “new” review of the E-470 being put out… use this as a reference if/when that time comes when you’re looking for a used unit.

For me, this amp is a keeper – it has no sonic shortcomings to speak of (at least in my system), and the package of features and upgrade options will keep listeners who care to match it carefully, sated for a very long time. I won’t paint myself into a corner and say this is the last amp I’ll get… but if my time were running out, I’d be happy to ride to the end of days with the Accuphase E-470. Highly recommended.