A Neat trick with the compact IOTA Alpha speakers 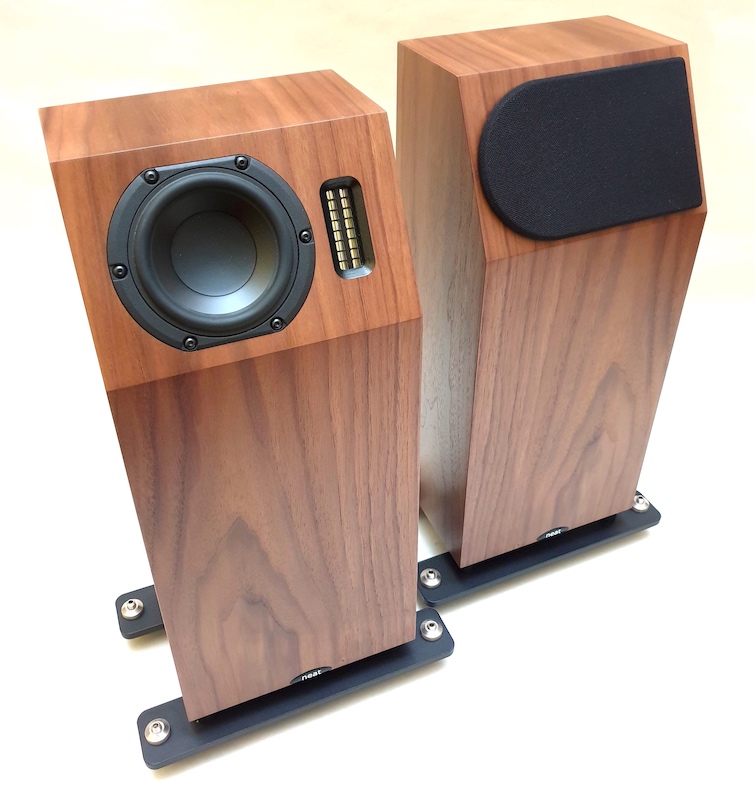 + Sound that seems out of all proportion to their size; highly engaging musical presentation; faithful tonal authenticity and fine timbral distinction; easy siting makes them as inconspicuous as floorstanding loudspeakers of this performance level will likely get; not too demanding of amplifier power.
– Sound per pound is big, but it don’t come cheap; price of the optional outrigger Neat Feet even less so; keeping things real, mighty as it roars, it’s ultimately still a little mite’s roar.
Sound: 9/10
Value: 8/10

IN this day and age, small speakers which can sound big aren’t exactly thin on the ground, though most of them come in the form of bookshelf or stand-mount units. Small in size they may be, but not all of them are able to be inconspicuous, yet still perform at their best. I’ve lived with LS3/5As long term and had the pleasure of reviewing some well-regarded mini monitors but most of these did not relish hugging the room boundaries.

Miniature floorstanders, on the other hand, are much more rare, so when I heard the Neat IOTA Alpha at the KLIAV Show 2018, albeit in an open foyer area, I suspected these would be something special when used in rooms of more modest dimensions. And fortunate chap that I am, I’ve now had the pleasure of hosting them for the last month or so.

The review pair came in a nice “American walnut” wooden finish (options include natural oak, black oak and satin white, but there have been pictures of samples in other finishes on the Internet) and they really are tiny – with a height of about 45cm (with 20cm width and 16cm depth), they not only do small, but also low slung. 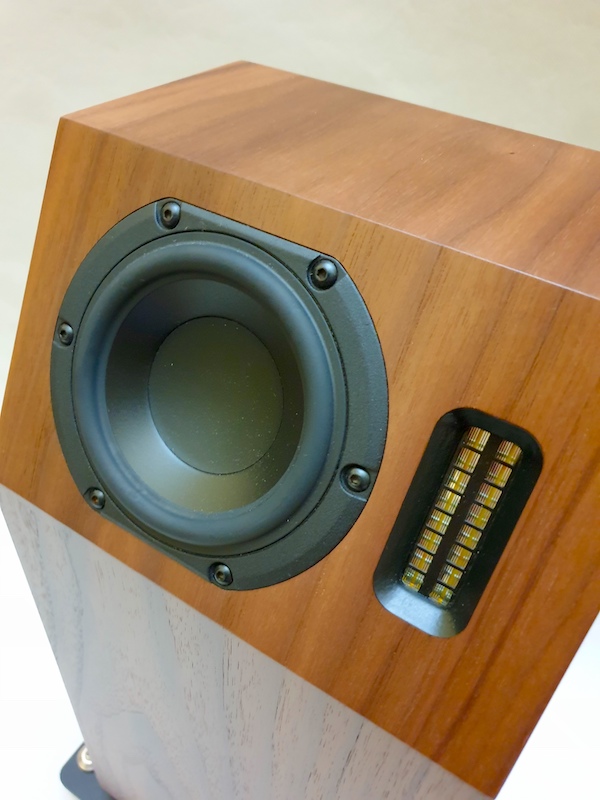 Okay, so Klipsch and JBL and many others have had low slung loudspeakers, too (think Heresy and L100), but these were more thigh/hip than knee-high, and near all were bloody much larger, too. To achieve the expected image height for a seated person, Neat’s designers have angled the top portion of the cabinet where the treble and midrange drivers sit to fire at an upward angle. One, thus, does not have to physically tilt the loudspeakers back by resorting to a differing-height foot or spike arrangement.

SETTING UP
The tweeter for the Alphas come in the form of a planar magnetic EMIT driver while the mid-woofer is a teeny-weeny 10cm polypropylene cone unit. Plastic and cloth grill covers, which are mounted by magnetic attraction, are provided to protect the drivers. There is a small port at the rear of the cabinet located close to the bottom, and a single set of speaker binding posts for amplifier connection, so no bi-wiring or bi-amping, please. Personally, I think the designers rightly judged their potential customers for the Alpha as having different priorities and appear to have put the costs elsewhere into the design for better results.

As there is a second (13.4cm, this time pulp paper) drive unit firing floor-ward from the base of the cabinet, the Alpha’s height has to be further augmented for clearance at the bottom to enable the driver’s output to work as designed. Normally, a set of spikes are included to achieve this but for this review, the local distributor decided to provide the Alphas with their optional heavy-iron spiked outrigger Neat Feet’, which widen the stance taken by the speakers at the base, improving stability, which can only be a good thing. 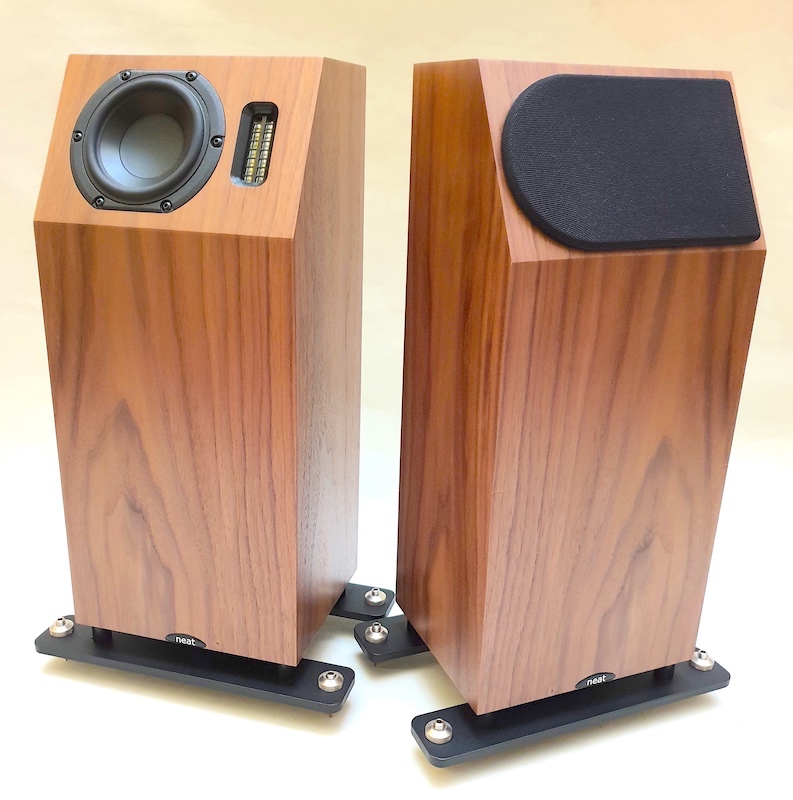 The Neat Feet have to be bolted into the threads at the base, and the end result is each loudspeaker takes up just a little more real estate at floor level. It was nice to see base cups provided and I did not have to risk scratching my floors during the review period with the Neat Feet’s spikes. At a weight of 6kg per speaker (and even with the feet adding extra to this weight), the IOTA Alphas were easy enough to move around to do the necessary placement experimentation. Sadly, the standard spikes were not included, so no comparisons could be made as to the level of contribution the optional Neat Feet brought for their price.

Specifications provided by Neat are a frequency range of 33Hz-22kHz, sensitivity at 86dB/2.83V and a nominal impedance of four ohms. They recommend an amplifier in the 25-100 watt power range. I tried a few in my stash, ultimately settling on my trusty old Exposure X, which, even if not the best amp of the bunch, had that punchy, fast quality which seemed to me to bring out the best in the Alpha musically (in this case).

After experimentation, I found that a good balance between depth perspective, bass reinforcement and physical un-ostentatiousness could be achieved with the little Alphas’ backs sitting about as little as 45-70cm from the back wall. If you’re the kind that likes your equipment in-line, this roughly puts the faceplates of your source and amplification components and the baffle of the Alphas on the same plane. Whether one prefers the mirror image tweeters in the pair to sit on the outer or inner position is a matter of taste as I found both to work well – I had them about 1.8m apart, where an inner position was perceived to produce marginally better focused images.

LISTENING
These speakers sounding big and not in expected correlation to both their cabinet and driver sizes (well, at least the visible ones up top, anyway) was virtually a given for me, having heard them, and other pint-sized Neat loudspeakers, before. Once set up and running, the Alphas also seemed to be baying not to be taken as a novelty act and to be adjudged as quality loudspeakers in their own right.

They succeed at their raison d’être… and then some! Sitting about 1.7m back from the plane of the speakers, I heard these little tots produce an image of good height (there is some acclimatisation to be had if you’ve come from really tall speakers, but it happened rather quickly for me) and even with their near backs-to-wall siting, the depth perspective was very good, with finely focused images and a good measure of perception of front to back layering, as well as stage width. On most recordings, it wasn’t easy to localise the sounds to be emanating from the Alphas and I doubt one could readily pinpoint the position of the loudspeakers blindfolded.

The Alphas are very well voiced and sounded wholly coherent across the sonic spectrum. They were slightly laid back at the top, though airy and virtually vice-free, with a well projected midband which, together with being amply able to convey a good slice of the characteristics of the recording venue’s ambience, helped convince one that one was quite possibly hearing what the recording engineers heard during the mixing sessions. Well-recorded un-amplified instruments had a good measure of authenticity to them, the speakers even taking a fine stab at reproducing the lower reaches of solo cello (the superb Vincent Berlanger Pure Cello album from Audio Note), double bass, and a nicely recorded Borsendorfer piano track, though it would be unfair to expect them to equal the abilities of a much bigger loudspeaker pulled clear of the room boundaries. 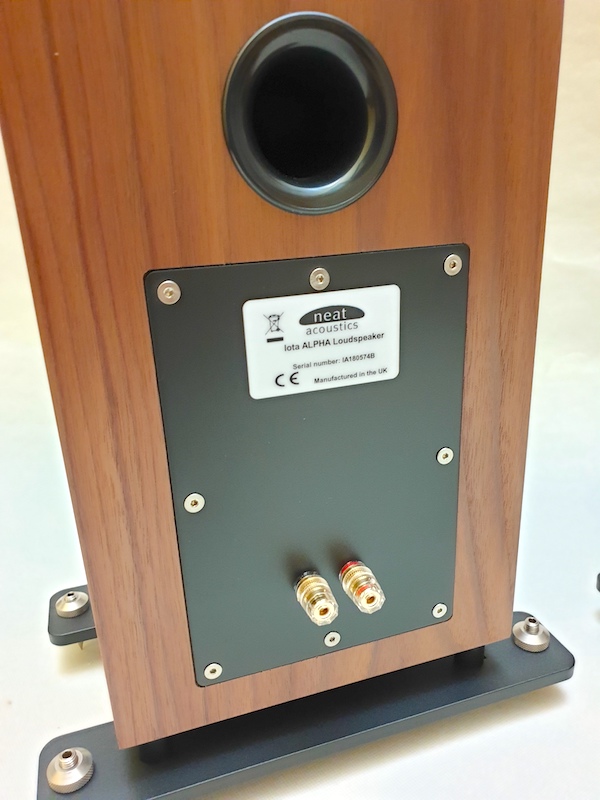 They also did a superb job with voices, both male and female, and choral singing was a joy to hear through them. That disparate driver technologies were in use was never a cause for concern, noting that voices and instruments sounded truthful in tone and timbre. But all the hi-fi things aside, the Alphas’ best attribute, to me, was that they allowed the music to engage the listener, being expressive and rendering all the little dynamics shades and rhythmic intricacies of complex tracks which you only realise some speakers don’t quite get as fundamentally right when your interest is subconsciously reduced during listening, and you don’t really know why.

The Alphas just lapped up the signal emanating from the combination of a vintage Roksan Xerxes-RB251-Denon DL110 and Exposure X amp. Playing the likes of Yazoo’s You and Me Both (with a dose of repeats of State Farm at near-insane volume), Tears For Fears’ The Hurting, and The Smiths’ The Queen Is Dead, I really dug what these little Neats could do with music of that period from their countrymen. So, what we have here is a loudspeaker with the ability to get the best out of all sorts of music, and the ability to unobtrusively blend into the environment, physically and visually, in smaller spaces – that’s a Neat trick by anyone’s reckoning.

THE LAST WORD
A loudspeaker like this is a catalyst for achieving (temporary?) domestic bliss, in that you start agreeing with your spouse that a good loudspeaker should be heard a lot more than seen, and she starts agreeing with you that these not-cheap little tots look to be well worth the money to acquire for the sound they produce.

Leaving the rather less-affordable Kii Threes aside, the Neat IOTA Alpha is the most satisfying near-wall or boundary-hugging loudspeaker for smaller rooms I have hosted in my own premises. I can’t recommend these Alphas highly enough – if tiny loudspeakers are what you are on the lookout for, to see and hear them is to want them.