Denon 600 series amp and CD player – doing it with flair 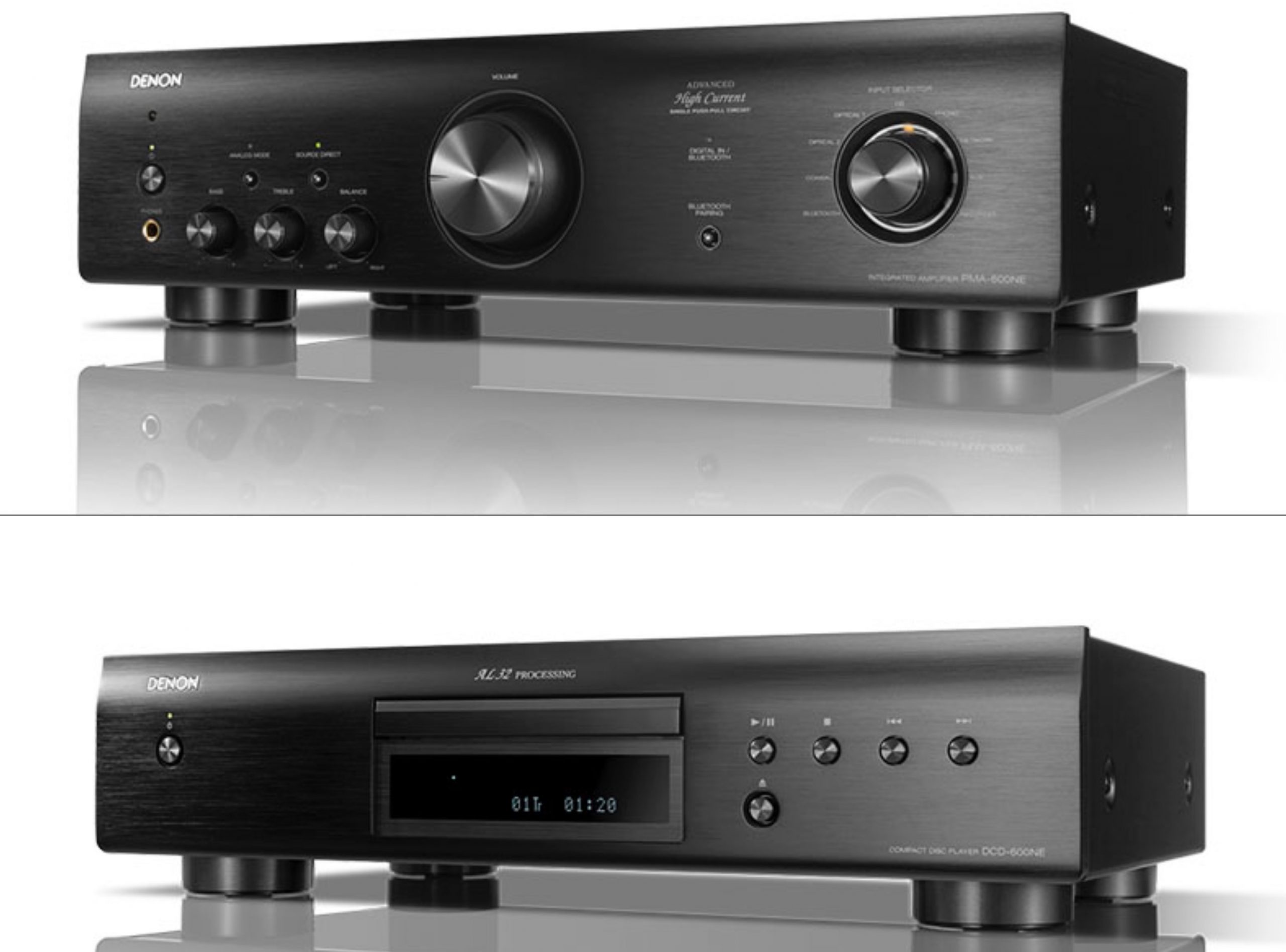 WHAT does today’s budding hi-fi enthusiast choose as core components? A CD player and an integrated amplifier matched pair? It would seem so, though our esteemed editor was less certain! He nonetheless proceeded to assign the Denon combo of DCD-600NE and PMA-600NE (CD player and integrated amplifier, respectively) to moi, someone who couldn’t tell a Raspberry Pi (streamer) from a strawberry shortcake (So how many raspberries have you eaten? – Ed.).

I did a quick check, and results indicated the paired same-range visually-matching CD player and integrated amp is still par for the course – almost all the leading specialist brands have them, so if they are still making them, somebody must be buying them.

Denon say it has aimed these at “the aspiring music enthusiast”. The ‘NE’ suffix for each model number stands for “New Era”. Apparently, apart from a relatively recent change of control/ownership of this century-old revered brand, there had also been a change of personnel where another lead engineer had taken on the role of “Sound Master” to give the final seal of approval on the sonic performance of the components being to his satisfaction before Denon unleashed them onto the market.

SETTING UP
The PMA-600NE integrated amplifier (which I shall refer to simply as “the amp”) has been given quite a suite of features, ready for both vinyl (MM phono) as well as digital, with inputs to its internal 24-bit/192kHz D/A converter being via one RCA coaxial electrical, and two Toslink optical, connections. An internal aerial allows the amp to receive Bluetooth signals from your cellphone or other suitable device. You also get four line level analogue RCA input pairs.

For outputs, there is a line level RCA analogue pair for a recorder, with headphones listeners being served by a 6.35mm terminal sitting just below the power on button. Loudspeaker connections are via single pair binding posts (which can accommodate banana plugs if you dig out their inserted plastic lugs) and a line-level mono subwoofer output in the form of one RCA jack.

The amp features tone controls, these being bypass-able in “Source Direct” mode, and there’s an “Analog Mode” feature where the Bluetooth and digital processing functions may be turned off to minimise signal degradation when not in use. Curiously, the usual Japanese amplifier “Loudness” button has been given a permanent vacation with this amp.

The amp is rated at 70 watts (four ohms) or about 45W (eight ohms) per channel. Physical dimensions are 434 x 122 x 307mm (w/h/d) with weight at 7.4kg. I felt the amp to be well put together, the buttons engaged firmly and the volume control was weighted with good traction when hand-turned. The rotary source selector had a firm click feel when set to the relevant chosen input – switching is electronic and the knob may be spun in the direction which catches your fancy as there is no end-stop.

The DCD-600NE CD player is equally well constructed. I liked the clean look where only the essential control buttons and display inhabited the fascia. The read-out was a little challenging for someone with eyesight like mine at my age, but most would find it clear enough. The transport drawer had a leisurely pacing when (un)loading discs, but if this gentler approach puts less stress on its working bits for better longevity, I could live with that. Outputs were via the usual RCA analogue pair, with Toslink-only for digital. Dimensions were similar to that of the amp’s at 434 × 107 × 275mm (w/h/d) with weight at 4.3kg.

They looked dandy stacked, with the CD player on top, but I only used them sited separately on vibration dampening pads from the local Daiso on their own rack space. The pair was tested with wires in keeping with their notional station in life, ie nothing fancy, but with the loudspeakers used, the amp seemed to like thicker stranded copper cables.

Some listening was done with typical hardware store off-the-reel thin gauge cheapie speaker cables and some freebie RCA connectors – these were tolerable as starters but there were noticeable performance gains when the aftermarket cables were introduced. Sonic observations were premised on the latter. Both units had un-audiophilic captive scrawny power cords so, if that matters to you, that’s that.

One nice feature of both units was that they had power down management, going into standby when left unused for a period of time (I didn’t bother to bring out a stopwatch) so, with apologies to the makers of that old Italian washing machine advert with similar last syllable in its brand, this pair from Denon won’t constantly remain on… and on… and on….

LISTENING
I’ll say it upfront – the two were quite a delight to listen to, separately or together. The impression made was these weren’t produced by a design team out just to fulfil the brief of delivering competently engineered components that could stay on the right side of the bell curve sonically at their price points.

I started with the CD player, which was touted as having proprietary “AL 32 Processing”, where data gets churned by 32-bit/192kHz-capable hardware (appreciate that data from CDs is still at the 16/44.1kHz standard, as has been since inception). Presentation was upbeat and atmospheric with good dynamics and satisfying clarity and detail, especially low-level detail where all kinds of music tried came through with subtlety intact to retain ability to engage the listener.

Treble was impressive for a player at this price, nicely airy if a little less tidy than the resident ancient, but more ambitiously designed (and much pricier when new!) Micromega Stage 3 – cymbal taps and crashes were well controlled, and shakers, tambourines and other percussion instruments retained their character without getting lost into the mix as indistinct sounds employed to drive the rhythm. The Micromega was slightly better at conveying frame-hit-hand sound when a tambourine player accented the beat but unless you’re some dumb-ass reviewer doing these comparisons in the context of a more revealing system, the Denon did its job really well and these differences may go unnoticed in a system more in keeping with its price level.

Where the Denon showed itself to be a more cost-contrained item was in timbral presentation, sounding somewhat lean, missing some of the body and resonant characteristics of bowed string instruments – a bowed cello or double bass pluck just was noticeably less sonorous, although notes had good attack and decay. Listening to modern fare (do we consider New Order’s Blue Monday and the Leftfield’s Afro Left “modern fare”?) through the matching amp, I was getting the feeling that I could hold off from spending on a more capable player without enjoying my music any significantly less if my diet was heavy on this type of material. To get an earthier presentation, I also listened to the CD player through my old Creek CAS4140 s2 – some measure of fine detail was sacrificed, but I could see some listeners liking this approach more.

On to the amp – this needed more run-in time and proper warm-up to reach optimum, whereupon it got on with the job of driving the loudspeakers with surprising authority. There was a noticeable jump in purity and detail when the Source Direct mode was engaged, the upper bass cleaning up significantly. Having said that, I appreciated the option of the tone controls, which worked handily when listening to analogue tape.

The amp majored on clarity and drive, sounding powerful and capably controlled, and producing a fairly spacious and sizeable acoustic picture – and it wasn’t fazed when tested on a lark with Apogee Centaur Minor speakers in a largish open-plan space. Within test volume levels, there was no overt sense of strain or stridency, its presentation being between notionally neutral to slightly spotlit up top. Midband purity was good but moving down to the upper bass there was some suspicion of things having slightly more spread to it. I doubt most anyone would find this displeasing, though. Extension and firmness in the low reaches were impressive for an amp in this class, and the ability to deliver on synth-driven low rhythmic beats drew no complaints.

The phono section was surprisingly good, making a fine job of vinyl spun on an Linn LP12 with K18 Mk II cartridge. Noise was low and the better high frequency performance from well-pressed vinyl showed the amp had yet more to deliver. Plugging in a higher end external phono stage showed the limitations, as well as fine capabilities, of the internal phono section -intelligibility of lyrics in the Arcade Fire Funeral album became more of a struggle, with everything else shrinking and becoming less solid when reverting back to internal phono, but the descent in performance didn’t make results anywhere near intolerable.

The Bluetooth connection paired with an Oppo cellphone produced very listenable results, with enough clarity on musical material posted on YouTube to encourage prolonged searches just to sample the fare.

The amp’s headphone output’s performance was satisfying and if you’re not too demanding about it, won’t cause you to go online in a hurry to order a standalone headphone amp.

THE LAST WORD
The amp is quite a stormer. It did well with all kinds of music, excelling with the rhythmic, beat-driven stuff, and had a level of finesse not common at this price. Using the US/Japanese prices as benchmarks, with some adjustment for taxes, I would be a happy camper getting this level of performance for my money.

The CD player is somewhat at risk of being outshone by the amp, but should not be overlooked. It had no problem delivering the musical goods to expected levels for the price (and a bit more). It was clearly preferable to the results from plugging an old cheapie DVD player as transport into the coaxial input of the amp’s digital section, but (and this is more in praise of the amp than a knock on the CD player) if funds were very tight, one could make do with such a temporary solution after getting the amp, while saving up for the CD player.

So (on assumption the typical retail prices come in within expectation, speaking from a local perspective), here’s a pairing that would make listeners feel that they’ve gotten a bargain for their money. Bravo, Denon!