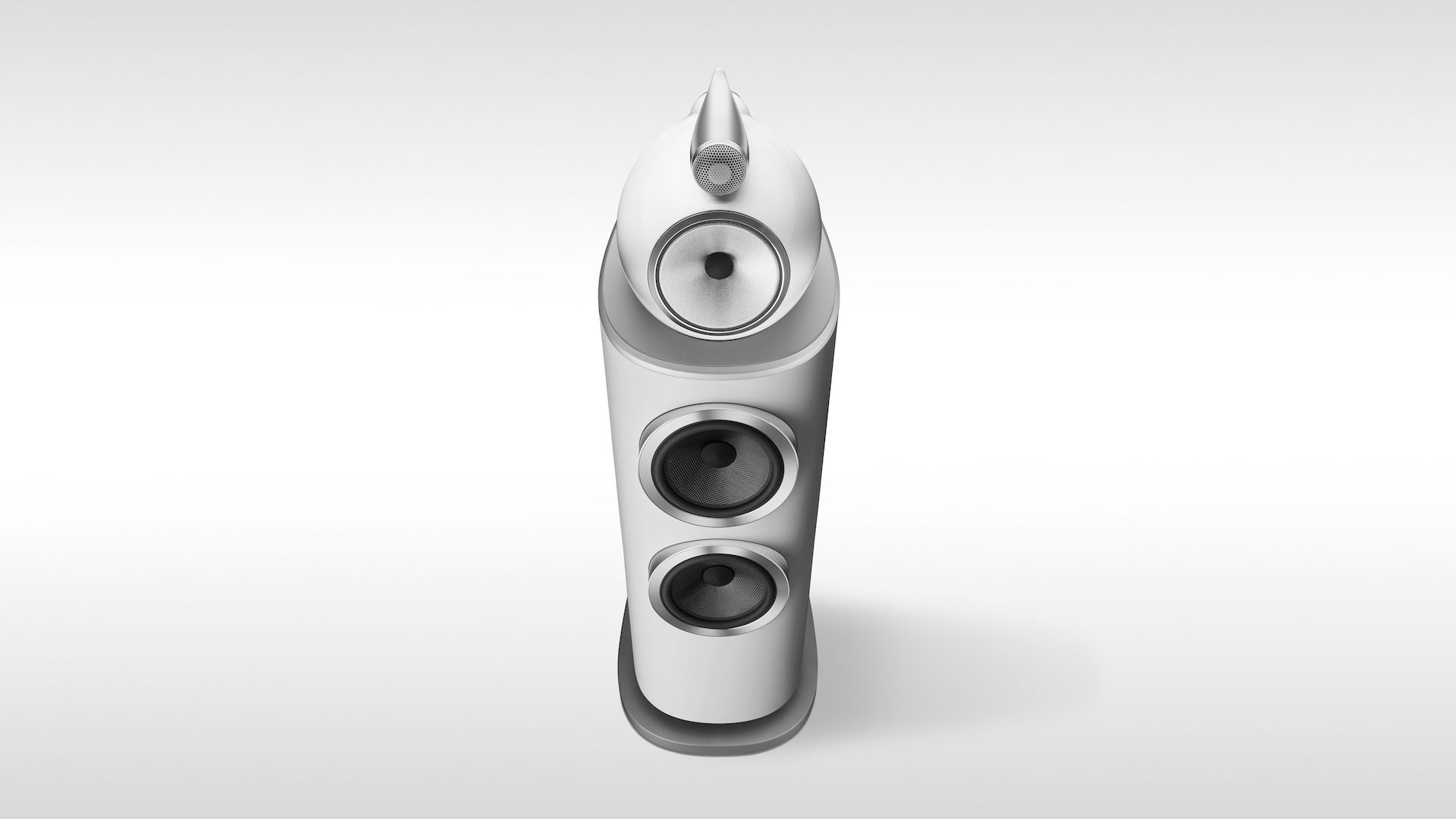 The engineering team worked on the D4 line for six years to offer a range of “breakthrough technologies to set even higher standards for outright sound quality.”

So, about the new stuff, this is what the Bowers & Wilkins tells us:

“Refined, elegant cabinet proportions plus luxurious, premium detailing combine to make this the most premium 800 Series Diamond range yet. The first and most obvious change is the addition of a fourth finish to the line-up. The new range now includes a Satin Walnut finish, joining the established selection of Gloss Black, White and Satin Rosenut.

“The profile of the new aluminium top is finished in ‘Leather by Connolly’ – in black for dark cabinets (Black, Satin Rosenut) and light grey for lighter finishes (White, Satin Walnut).”

And as for the construction and final design of the enclosures:

“Every model in the range adopts a revised version of the iconic solid-body tweeter-on-top housing, with a new, elongated tube-loading system to produce an even more open sound for high frequencies. This supremely stiff enclosure deftly resists unwanted resonance and is an exceptional acoustic form – especially when combined with a new two-point decoupling system that isolates it from the rest of the loudspeaker more effectively than ever. As before, it is milled from a single solid block of aluminium and now, it uses an anodised finish, either dark or light depending on the cabinet colour, to celebrate that fact.

“The range introduces three entirely new cabinet forms. The 805 D4 and 804 D4 adopt the reverse-wrap cabinet design first introduced in 2015 for the larger speakers in the series. This new form reduces the profile of each cabinet’s front baffle while dramatically increasing the overall rigidity of the complete system. It also allows crossovers to now be mounted in dedicated spaces on the rear of each speaker, housed behind the rigid aluminium spines.

“The 804 D4 builds on the potential of its new configuration by adding a downward-firing port with an integral aluminium plinth – again, much like the form used by the larger floorstanding speakers in the range. Alongside the 805 D4 and 804 D4, the all-new HTM82 D4 centre speaker adopts the reverse-wrap cabinet form of its siblings, for superior acoustic and mechanical performance.”

Other parts get their tweaks and upgrades as well.

“The composite Continuum Cone – used for both midrange and mid/bass applications – is already famed for its open, transparent, and neutral performance. When used as a midrange drive unit in Bowers & Wilkins floorstanding speakers, it is always combined with our Fixed Suspension Transducer (FST) midrange technology, which carefully avoids the coloration that traditional cone surrounds can introduce.

“Now, we have combined the twin benefits of Continuum and FST with an all-new advance that transforms the other key element of a drive unit’s normal operation – the fabric spider. Over decades of continuous development to nearly all areas of speaker design, the fabric spider, a key element in the suspension of every conventional loudspeaker drive unit, has remained largely unchanged, until now.

“In all three-way models, midrange drive units include a highly stiff all-aluminium chassis featuring Tuned Mass Dampers (TMD) to quieten any resonance. These complete drive units and motor systems are then isolated on sprung-mounted decoupling mounts, further restricting the flow of vibration into the assembly.

“Finally, the 803 D4, 802 D4 and 801 D4 include the massively stiff all-aluminium Turbine Head enclosure for their midrange drive units, providing not only an outstanding acoustic form but also even better isolation, since the head assembly is itself further decoupled from the bass enclosure below.

“The HTM81 D4 and HTM82 D4 introduce a new and similar concept but inside their cabinets – each centre-channel model now features an internal aluminium enclosure that provides a stiff, well-isolated housing for the midrange drive unit and its decoupling mechanism.”

The 803 D4, 802 D4 and 801 D4 use the same arrangement of downwards-firing Flowport, solid aluminium plinth and constrained layer steel damping, but retain the wheel-plus-spike configuration introduced in 2015, making each model far easier to manoeuvre to the perfect listening position than any rival design.

The Bowers & Wilkins Diamond 4 range is available globally from Sept 1.