First impressions: The numbers are confusing – I’ve never understood hi-fi manufacturers’ propensity for attaching numerals to their products, instead of proper names. NAD’s system goes back decades, and some of those numbers on its integrated amps have become classic, like “3020”. The C 546BEE, however, has a shorter pedigree, being a CD player – it is built on the success of the acclaimed C 545BEE model.

NAD products sport familiar lines, evolved from the 1980s, and apart from the newer and more industrial-looking “M” series, show few sweeping changes from yore. The C 546BEE is cosmetically understated – clean lines, uncluttered fascia and a logical layout … certainly nothing that demands a double take. The black finish places it among the hordes in the hi-fi herds. Still, to many audiophiles who seek comfort in familiarity, this is only a good thing.

Sound-wise, I quickly took a shine to the player’s assured and eager presentation – not that it was bright or brash, just wholehearted and compellingly catchy. It was just out of the box, so I let it simmer and settle over a few weeks. 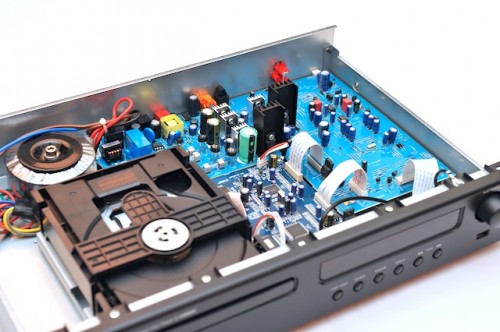 Specs: The C 546BEE is compatible with CD-R and CD-RW discs that are loaded with MP3/WMA-coded files, so you can get almost 10 hours of uninterrupted listening if you opt for 128kbps resolution transfers (not that you would want to sully your ears to such an extent). There is a USB input in front you can plug your thumb drive into for playback of MP3 audio files – good for up to 384kbps. Very much a player for today, this one … I’m rooting for the feature on all CD spinners.

Doing the number crunching inside is a Wolfson 24-bit DAC chip – NAD says this was chosen for its “excellent low-level linearity and detail retrieving capabilities.” The digital and analogue sections have separate power regulators to isolate the effects of electrical interference.

NAD further optimises audio performance by careful layout of the PCB tracks around the DAC. Highly accurate frequency response is aimed for with the use of metal film resistors and polypropylene capacitor in crucial areas of the circuit, while op-amps are the high-grade OPA 2143. The C 546BEE’s very low output impedance of 300 ohms makes it less sensitive to interconnects or partnerning equipment, says NAD.

Stereo analogue outputs are provided, as are digital coaxial and digital outputs, should you want to tag an outboard DAC to the player as a future upgrade. The power cord is non-captive but of the two-pin variety. A remote control is provided. 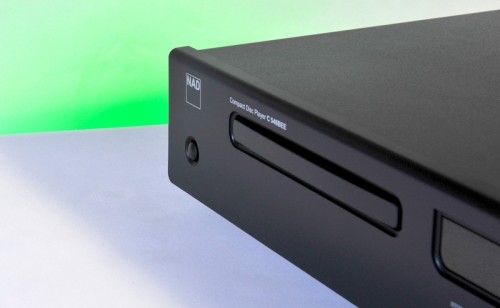 Performance: The more I listened to the C 546BEE, the more it struck me how far the Red Book format has progressed, especially in this price range …  the Rega Apollo-R I reviewed earlier had proved this. My own CD spinner may be four times the price, but players like the NAD and Rega aren’t necessarily a quarter that value in performance … if you can indeed quantify these things.

It was hard to put a finger on exactly one quality that impressed – on the whole, the C 546BEE held together well, revealing more-than-competent detail retrieval capabilities, along with a smooth tonal balance, faultless rhythm and a compelling musicality. There was no hint of any grittiness in the upper registers, and although I would have liked the treble to open up a wee bit more, fatigue was never a factor to contend with during longer listening sessions. Of course, the midrange was proper in most senses of the word, supported by a non-intrusive bass that was fluid, natural and never overwhelming.

The player didn’t let down with a wide range of music, whether acoustic or electric, simple or complex. Sometimes, just sometimes, I felt the upper bass registers exhibited a very slight thickening and veiling, and if the recordings were busier, there was some suggestion of congestion in the presentation … mind you, this was compared with my reference source, so remember the price factor.

There was little to fault in the player’s confident and balanced sound, and it was never off the pace in the area of timing. Coloration was seldom suggested nor could I hear any of the glare of the digital players of yore. In fact, the smoothness of presentation suggested an organic nature … even if it wasn’t exactly analogue in texture, the NAD was neither sterile nor detached sounding. It also exhibited a stage with considerable depth and dimension – I suspected it won’t shame itself in a higher-end system and can only enhance a budget combination.

The good: The overall presentation, unfussy and highly involving sound, and level of detail retrieval aren’t surprising, given NAD’s track record over the decades, even if it has been mostly with amps. What is surprising is that NAD managed to pack so much performance for the price. The USB input is mere icing on what is already a very delectable digital treat.

The ungood: The cosmetic design is a bit unambitious, even staid, okay, bland … and this might bother some people. Of course, it shouldn’t matter, but the lifestyle crowd who also want good sound might give it a pass just because of this (their loss, though).

Final verdict: Purely from the view of performance, and given the price, there’s really nothing to fault with the NAD C 546BEE …it’s great value for money, nudging ahead of the competition for the extra feature (USB).

Whether you’re planning to build a system with a long-term view on the high-end, or replacing your old budget player, you’ll find the NAD to be exemplary in many areas. Strongly recommended.