First impressions: Unmistakably NAD! Anyone familiar with the company’s designs can tell this from a mile away. The one item that differs from NAD’s entry-level amplifiers is the VFD (Vacuum Fluorescent Display) screen.

However, the weight of the C 390DD (direct digital) integrated amplifier surprised me when I removed it from the box, being relatively light compared with NAD amps I had previously encountered. Given the 7.7kg weight, it was hard to imagine this amp’s rated to deliver 150 watts per channel.

Setting it up was easy enough as there was no requirement to handle thick analogue stereo interconnects. All inputs are digital, hence a single wire each for coaxial, optical, AES/EBU and USB A-B is all that’s required, besides the speaker cable.

Once the amp was up and running, the first test was done via my faithful Musical Fidelity M1 CDT transport connected using Siltech AES/EBU digital interconnect. Fresh out of the box, this amplifier delivered the heart-thumping drumbeat of Foo Fighter’s My Hero track with precision and detail, providing a gutsy performance. However, it was not the most expressive and involving first impression. There was still something missing. Read on … 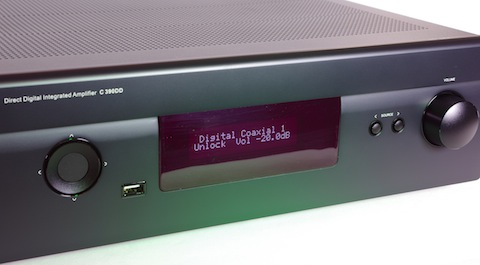 Specs: The build quality is nothing to shout about and to some, it might feel a bit plasticky. The inputs, however, are sturdily built with good quality speaker terminals for bi-wiring, tight-fit USB connections and an array of digital inputs. Even the remote is ergonomically designed for easy control.

The fascia comes with a bright digital display which can be dimmed to your preference. There are a standby soft-touch button and medium-sized volume knob. For source selection, NAD opted for a left-right toggle button. There is also a USB-A input for a quick plug-and-play using thumb drive. This unit is also equipped with a navigation scroll function to adjust several parameters such the treble, bass and balance level.

The amplifier comes fully equipped with all the common digital inputs and outputs. And as the name suggests, everything is kept in the digital domain,  from source right to the speaker outputs. There is, however, the option to install an analogue module.

The digital inputs are two USB-A (compatible with the common audio formats), one USB-B (24-bit/96kHz), one balanced (24/192) and two optical (24/96) and two coaxial (24/192). One digital coaxial and optical output  each are provided, as are a pair of RCA outputs for a subwoofer or two. System power on/off operation can be effected via the 12V trigger input/output. 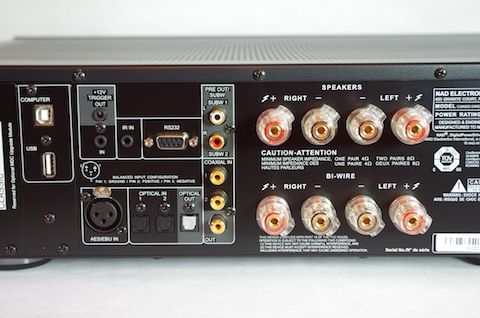 NAD claims the C 390DD outputs 150 watts per channel into eight ohms, and includes four sets of speaker terminals to allow bi-wiring. For those audiophiles with a thing for wires, the power cord here is detachable. There are also functions to adjust treble, bass and balance.

The MDC (Modular Design Construction) approach ensures future-proofing – two optional modules, the DD HDM‑1 and the DD AP‑1, can be installed. The former allows the user to integrate the C 390DD with a Video 2.0 system, using Blu-ray or DVD as source. Three HDMI input terminals and one HDMI output with video pass-through will allow two-channel audio and 3D compatibility.

The AP-1 allows analogue source compatibility, having a pair each of single-ended and balanced inputs, and even an MM/MC phono section.

Another unique feature is  the amp’s capability to run a Room EQ test (scroll to end for video). NAD has devised a very simple test sequence to make the adjustments by ear (or using an SPL meter). It employs the same concept musicians use to tune a stringed instrument, with a slight twist – instead of matching frequency or pitch, the unit will match loudness levels. This is mainly to cure standing-waves issues in the room. Playing back the Room EQ test sequence allows this problem to be easily handled via your ears and the amp’s Room EQ filters. 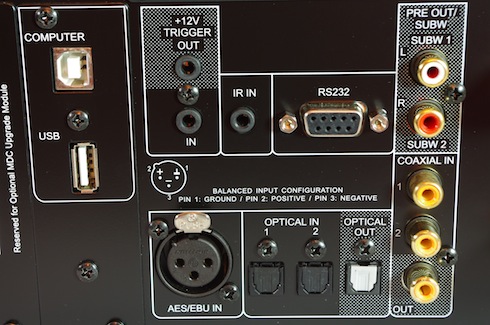 Performance: I took the liberty to test every single digital input on the amp. I even bi-wired my speakers just to hear how it faired against my usual bi-amped set up. Only one track was used but in different formats. I chose The Eagles’ Hotel California track (live version) as my reference as I believe this provided me with the entire required music spectrum.

First to be tested was the balanced input. The amp delivered a certain level of detail and emotion of the live performance. The guitar strumming was smooth and solos were detailed, note by note. Percussions sounded tight and convincing.

However, I did not experience the usual live ambience that was possible in my own system. This was, however, with the volume at a lower level. I pushed the volume up and it did improve the overall ambience by a bit but this should not be the case for a gutsy 150-watt amplifier. I was expecting a more natural spatial simulation at lower volume.

Next, I tried the same track via the coaxial input from the same CD transport. Things sounded flatter but there still were the detail and precision of the balanced mode. As both inputs can handle up to 192kHz, there was only a subtle difference in the overall performance between these two inputs. The main difference, of course, was the gain level. I had to turn the volume up with the coaxial input to get a more natural live air.

I then switched to optical input. For the fun of things, I did not use a CD this time. I have this track on a Minidisk in ATRAC format and used my faithful 14-year-old Sony MD player – and I played this track over and over again. Why? This is when I noticed the biggest change and improvement, compared with the MD player via its stereo outputs on a regular analogue amplifier. The NAD C 390DD injected a new life to the format, bringing up the performance to a similar level as my CD transport.

Moving on to a computer audio system (CAS), I used the MPlayerX on a Macbook Pro and the NAD amp was easily recognised by my laptop. Choosing the NAD as my main audio output, I started by playing Hotel California in FLAC format. No sound!

I then played the MP3 version on iTunes and it turned out fine. A quick reference to the NAD manual solved the issue. The USB-B input can handle signals of only up to 96kHz. Changing the output setting on my laptop solved the issue – however, the track was now down-sampled to 96kHz.

The overall live ambience of this track seemed suppressed, which made it sound muddled. The detail and precision were lost compared with the CD and MD source. There was still some level of the gutsy performance but the ambience was no match to CD or MD. I was a bit disappointed, I must say. Playing the MP3 version (48kHz/320 kbps) via iTunes provided a better experience. The overall sound was more natural and closer to CD. I conclude this input was the best for straight iTunes application, with standard MP3, ALAC or AAC audio files.

Now, the USB-A inputs (front and back) are even more limited compared with the USB-B, allowing only up to 48kHz files and recognising just MP3, WMA and FLAC formats. A second disappointment here. I felt that these two inputs were present more for convenience rather than providing the latest digital offering.

For the sake of testing its functionality, I loaded the MP3 files and FLAC onto a thumb drive and hooked it up to both USB-A inputs. The amp easily recognised it and displayed the track name. The MP3 files played fine and gave out a similar experience with the CAS but the FLAC files, being 192kHz, could not be played.

The good: The C 390DD is a true all-in-one digital domain amp with the benefit of Room EQ. For a minimalist system, you can do without the additional DAC kit and just get a laptop or CD transport. The amp has enough power to drive speakers to their limits without distortion. It also is detailed and precise, with guts to rock out even with the lightest of rock music.

The MDC means users don’t need to worry about the future – with two more slots on tap, NAD will continue to provide the latest and updated modules for the ever-growing digital domain. And for those who like to tweak the sound, the treble and bass adjustment functions will suit you well.

The ungood: Even with the power on tap, the NAD did not always deliver the expressiveness and liveliness of some other amplifiers in its price range. Being a digital amp, that’s what it does exactly – produce a digital sound.

The specs of the USB inputs are the biggest letdown. While other manufacturers are making 192kHz the minimum “standard” for their DAC or digital inputs, NAD has limited it to 96kHz on USB-B and 48kHz on USB-A – at the price, there is no excuse for this. The high-resolution music market is growing so rapidly that there are already DAC manufacturers producing up to 384kHz.

Final verdict: The C 390DD is a good attempt by NAD to cater for its digital domain consumers, who will benefit from long-term upgradeability. There is no lack of power as well on the amplification section as I believe it can drive most commercially available speakers.

If simplicity is your preference, this amp is the one for you. It might not be for everyone, especially analogue lovers, as the results can be a bit digital sounding. But the amp makes up for this with its precision timing and detailed presentation.

Amplifiers, Reviews
PS Audio Noise Harvester – it’s back!
Audience’s The ONE is shipping