First impressions: A nice play on words the Audiolab M-PWR is… well, it is an amp, and it does empower the user with the means to get the music out from source to speaker. And without taking up much space, one might add.

This is a compact power amp that’s obviously aimed at those putting together a desktop system – hook up a DAC or CD player with an onboard preamp, a pair of speakers and you’re good to go. It is made to match Audiolab’s new Q-DAC preamp/DAC but that’s not to say you can’t use it with the costlier M-DAC or 8200CDQ. Or even other-brand components.

This being an Audiolab, I wasn’t expecting it to move to far away from the house sound. In fact, the M-PWR reminded me of the 8200MB compact monoblocs from the company. It was willing to go loud and didn’t sound clumsy or cluttered. Clinical? Well, it was too early to say, so I let the music play for a bit. 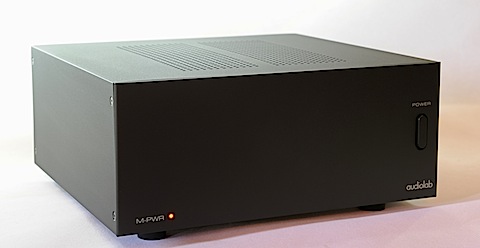 Specs: Audiolab hasn’t updated its website for this amp, so all I know is that it appears to be a balanced design, putting out 40 watts into eight ohms and 60W into four ohms. The manual says the M-PRW has an ultra low noise gain circuit, is optimised for low distortion and protected against shorting and high temperature.

Both RCA and XLR inputs are provided – according to manual, the balanced route ups the performance. However, I was able to test it only with the single-ended option. The positive spin on this is that you rarely get the option of balanced circuitry at the price.

A set of loudspeakers outputs is provided, the design of the terminal requiring you to unscrew the plug and slot bare-wire or jacks into a little cavity in the binding post.

The IEC power input (the cord is detachable) is located just next to this, so with one pair of speaker cable jacks jutting sideways towards it, connections in this area are rather fiddly. A design oversight, I would say.

These are all located at the rear, other than which, the M-PWR is just a black box, with a power switch and red LED indicator in front. A silver option is also available. Each unit measures 246.5 x 114 x 252mm (w/h/d) and weighs 4.7kg. 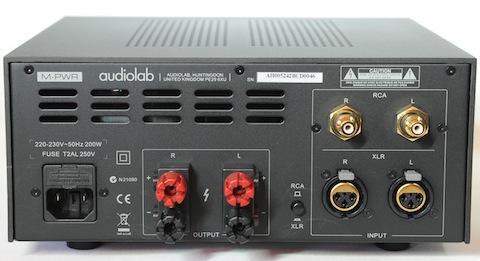 Performance: I’ve been putting together a secondary system on a tighter budget and the M-PWR came along at the right time. There was no chance I was going to use it to drive my resident Magneplanar MG1.7 speakers, so the M-PWR went in with the entry-level Polk Audio.

What I noticed quickly into the sessions was the the Audiolab reached optimum performance very shortly after it was powered on … it didn’t vary greatly two or three hours later, unlike many other amps I’ve owned, some of which take a couple of hours of play to hit the sweet spot.

The M-PWR sounded clean and tidy in its sonic delivery, with enough drive to belie its modest power output. It was largely uncolored, and if anything, sounded a tad “cool” … not as in detached but as in minus the warmer textures that something like a NAD or Marantz at this price range would have.

That it grabs quite a bit of detail from the signal and delivers this to the speakers without fuss, is what will matter for many. I liked the easy delivery of power with a range of recordings, the M-PWR handling dynamics with finesse and seldom sounding harsh in the upper ranges.

It delivered as capably with rock music as it did with acoustic recordings, although if your stable diet is the likes of Nirvana or heavier rock material, you might feel there’s some lack of bite in certain areas.

I won’t complain too much, though, because this one is obviously aimed at a particular sort of user who won’t be looking at rattling the roofs. What the M-PWR does with moderate-to-soft volume is pleasing enough – no grain or grit, no glare and reasonable bass heft. 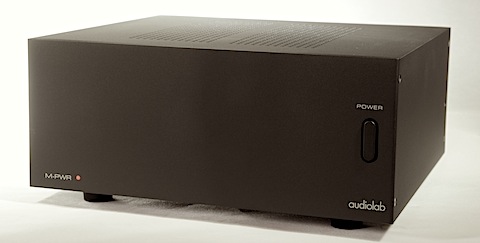 The good: A compact power package that delivers a rewarding performance most of the time, without working up too much of a sweat. Those looking for class in a desktop or compact system will find little to complain about, sonically or in any other area.

The un-good: Not for those who like a tinge of rosiness in the results, while the modest power rating means you may outgrow it not too far down the road. The location of the AC receptacle/speaker terminals bugs me no end.

Final verdict: The Audiolab M-PWR will please in varying degrees. Perhaps not the final word in this price range in musicality or bass slam, it nevertheless handles most things with ease.

Partnered with the right ancillaries, it could just grow and grow on the user who’s more bothered about enjoying his music collection than boasting about how much power his amp can deliver.