First impressions: Pro-Ject Audio’s DAC Box DS is one of those things that get yourself thinking “yeah, I could definitely use that”. It’s compact and serves a pretty specific purpose. One looks it up pretty much already knowing what it is capable of… on paper at least.

The actual sampling turned out to be somewhat of a mixed bag. My initial expectations of it being a rather minimalist, form-following-function product was not that far off in its rendering of musical performance.

Delve deeper and it comes as little surprise that it’s also not that far off from what others can do equally well, too. 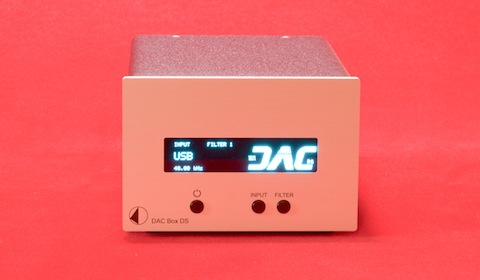 Specs: The design brief falls in line with the mantra of simplicity and singular purpose. The literature on Pro-Ject’s website makes a lot of mention of the DAC Box DS being “a superior interface for demanding computer audio”. Indeed…

The DAC Box DS accepts digital signals via coaxial, USB or optical inputs (up to 24-bit/192kHz for the first two, 24-bit/96kHz for the last) and outputs via a set of line-level RCA analogue sockets. Two filter options are provided.

Weighing in at a scant 1kg, and measuring 103 x 72 x 144mm (w/h/d), it doesn’t take up much real estate, adding much to its flexibility appeal. Finish options are silver or black. 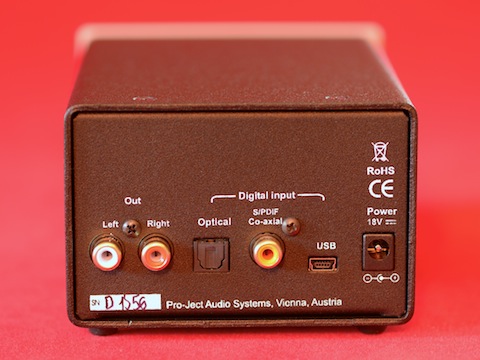 If you’re running Windows, the DAC will prompt for an installation to accommodate the 24/192 driver, whereas Macs already support this as standard. Thankfully, I had no such dramas during the installation and looked up the latest driver version from the Pro-Ject website itself with no issues.

Nothing, unfortunately, shouts “computer” more than power supplies without IEC receptacles to accommodate aftermarket power chords. The DAC Box DS is powered by an 18V/500mA DC unit that operates at 50Hz – no complaints on this front but hi-fi hacks with a penchant for upgrading power cords will certainly need to apply elsewhere.

Those who like toying around with power supplies might find the DAC Box DS to be a rather interesting experimental proposition. As it currently stands, there are no official upgrades available from Pro-Ject itself so those who are so inclined will need to look up third party offerings… if any.

Performance: In a word – safe. You won’t find the DAC Box DS coming across as offensive. It’ll please the majority of punters with its well-judged tonal balance, and delivers the kind of integrated even-handedness users expect these days even from entry-level gear.

That said, this isn’t at the expense of outright sonics; just that the best-in-class alternatives will still be able to show the Pro-Ject DAC a clean pair of heels in replicating transient dynamics, leading edge decay and projecting holographic audio images.

Given the simplicity of the platform, I reckon Pro-Ject’s execution of its linear circuitry and audio streaming bears fruit to a large extent. Noise floor is remarkably low, and I feel that its voicing is fairly spot-on, given how realistically timbral spectrum and color are recreated. 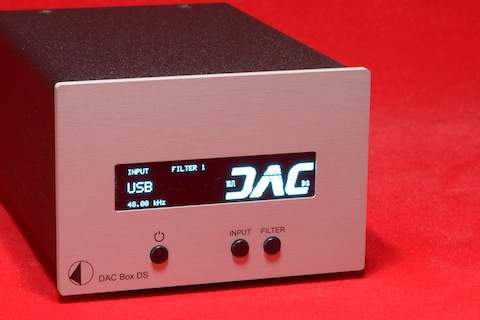 Fiddling about with the two available filter settings – steep and optimum phases – brings subtle but appreciable differences. The former sounds slightly more attacking, with some added weight thrown in for good measure while the latter adds an air of neutrality and a slightly wider spatial plane across what is already a pretty decent throw, giving an impression of added depth.

This will, ultimately, boil down to personal preferences – some will prefer the extended body and slam the steep filter dishes out while there will be an equal number who will go for the added sensation of upper airiness the optimum filter conjures. Pro-Ject may be on to something here, given the varying levels of quality inherent with digitised music files. Try before you buy. 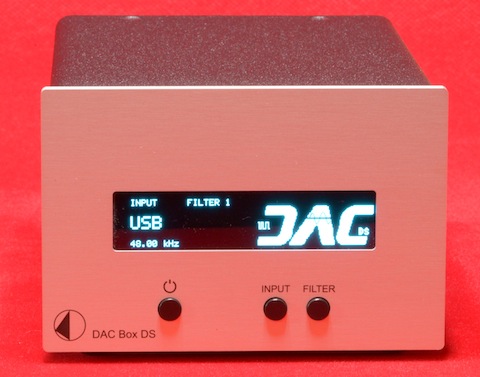 The good: It ticks all the right boxes. The DAC Box DS is pretty smartly configured and hits the nail squarely on its target market. A fine balance between features and usability puts this on good footing for those aspiring to a fuss-free set-up that broadly also delivers sonically.

As part of a digital source solution fronting a main system, the versatility of its inputs, especially USB and optical, is a big plus. Its form factor is also a boon and is sympathetic towards fairly discrete placements where visibility, or lack of, is a criterion.

As part of a scaled-down and/or second system, the DAC Box DS won’t probably be found wanting by a large degree. I can foresee many desktop/small study/bedroom systems with this as a central feature to building a solid music-making facility.

The ungood: The rather old-school display mode is a bit of a hit and miss – the display over the letters D-A-C robs whatever real estate left with not much usable space, so only the input source is legible from a decent distance. Having this removed would have made for more effective use of the screen for enlarging the incoming bit depth information, selected filter setting and sampling frequency.

Final verdict: In the final analysis, the Pro-Ject DAC Box DS doesn’t necessarily break new grounds. It does what it says on the label competently enough, even if it doesn’t particularly stand out.

It has its work cut out for it in a field of computer-based DACs that’s starting to become rather overpopulated. Had this been launched three years ago, it could have probably been a benchmark. But within today’s landscape, this is squarely middle-ground.

Given its price, though, I’m sure it will not be found falling short for what it brings to the table.