IF your world of portable music playback has thus far been confined to the iPod and its siblings, you’re certainly missing out on quite a bit of other stuff available in the market.

There’s been burgeoning interest in high-resolution playback in recent times but Apple’s players offer, at best, CD-quality (although that may change this year). Those wanting to explore the world of 24-bit/96kHz and above have to look elsewhere. Their eyes may fall on South Korea’s Calyx Audio, which released its Calyx M “high-resolution audio device” late last year. The “M” is also possibly the only portable player available now that does DSD. (Actually, the Astell & Kern AK240, launched in January this year, also does native DSD; the Calyx M was launched in November 2013. – Ed)

Although the “M” has already been in the market for months, its firmware is being updated periodically. The latest firmware (0.95v) was released just a day before this review had to be written. 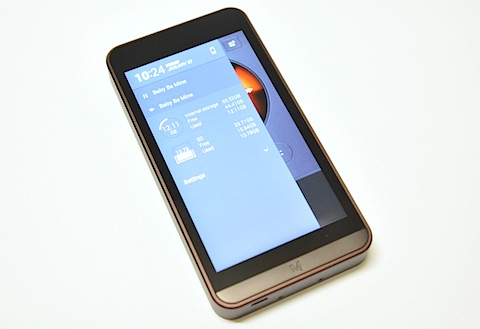 BITS AND PARTS: The “M” feels likes a slightly over-sized iPhone, and appears to be well built. Notably, it caters to a wide variety of formats, from MP3 to FLAC and WAV, as well as AIFF, AIF, DXD, AAC, MP4 and OGG… from 44.1 to 384kHz sampling and 16- to 32-bit depth. Not forgetting the ability to decode DSD.

Connection options are limited to micro USB (two lengths of cable are provided) and headphones. Controls located along the edge are a sliding magnetic volume switch, power on/off button and play/stop/forward/review buttons. Gapless play is provided for here, accessed via the menu.

There’s 64GB of flash memory on board; additionally, two slots are provided where you can insert SD and mini SD cards of up to 256GB and 128GB capacity respectively.

The 4.65-inch high-definition (1280 x 720) OLED display with adjustable brightness is a treat to behold and just the right size for a portable media player… and yes, it is a touchscreen. The rusty brown colour of the case lends the “M” a unique identity – I hope they stick to this and not come out with black and white finish options.

The Calyx M is compatible with Windows XP and Mac OS 10.6 upwards, if you want to use it as a standalone DAC, which is of the asynchronous variety – unfortunately, I was unable to explore this specific aspect of the “M”. It entails downloading additional software… and that will be explored at a future date. 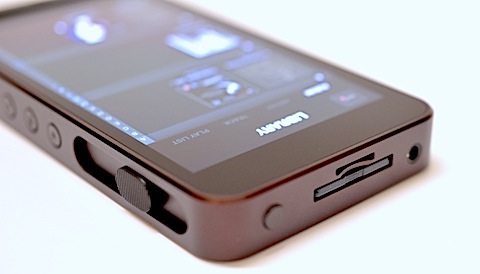 Calyx says you can get seven to 10 hours of playback time on a full charge – and charging is done off a computer’s USB, which is a hassle.

What does the latest firmware upgrade do? It allows impedance selection and better battery gauge calibration, improves media scan on booting up, updates  the user interface, and displays the format for each track, among other things.

More details on the “M” can be found at the dedicated site.

IN CONCERT: My first move was to transfer some of my high-resolution downloads on the provided SD card – SACD (88.2khz) transfers and DSD-encoded mostly. Even with RedBook-level resolution, I found the Calyx M to be better resolving of detail than the resident iPod. This was via the headphones… anyway the current iPod Classic’s onboard DAC is nothing spectacular.

When I plugged the Calyx into my secondary system via its headphone socket, I was initially disappointed because it didn’t seem to possess enough gain… but after the update, I was surprised at the results. Now, I was beginning to hear qualities I was more used to within a system of components.

I was, naturally, most curious about the SACD and DSD material I had loaded in the player, and I was not disappointed – the “M” sounded very organic with the material, lush in the treble, well fleshed out and very detailed. Headphones are not my field, but even through the modest cans and buds I used, I could not hear anything in the sonic that displeased my senses. 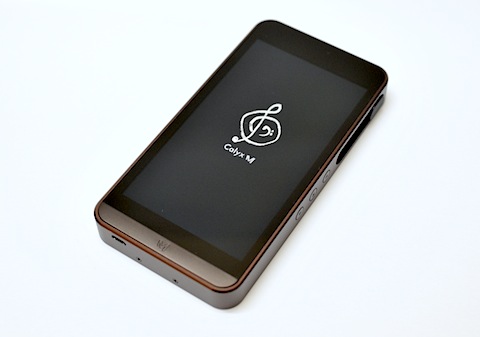 Obviously, what’s going to be coming out of the “M” will depend on the quality of the recording, and you would think that being an “audiophile” player – obviously – it would be more suited to the typical “female vocals” music listeners in the genre love. True, it showed itself well-attuned to reproducing tracks from Diana Krall and Norah Jones with finesse, conveying the sense of intimacy and emotion inherent to the recordings.

Yet, with more dynamic music – Michael Jackson’s Thriller or Oasis’ (What’s The Story) Morning Glory? albums were on the playlist – the “M” showed itself capable of replicating the energy and vibrancy of the music. Foot-tapping, yes, you might get lost in the grooves if plugged into your headphones and become totally unaware of your surroundings! The “M” also really shone with traditional jazz recordings, specifically, DSD-encoded ones.

While with the headphones and buds, I did notice a slight tendency to emphasis vocals in the female range, and this could sound a bit strident if pushed too loud… it was just a test, because you’re not really going to play into your ears at uncomfortable levels.

APPLAUSE: There’s little to debate over the sound quality of the “M” – it lacks little sonically, and can double up as a standalone source in your hi-fi system. I reckon you can also link it directly to active speakers for a minimalist system. Yes, it’s that good. Using it merely with headphones would be exploiting just a part of its strengths. The G cleft as the logo is a nice touch!

BUT… : Initially, buggy software – the player shut down occasionally and response could be sluggish – but this improved significantly the firmware upgrade. Battery life also initially left much to be desired and USB-only charging method via a computer is a drag. The unit also gets quite warm with use. 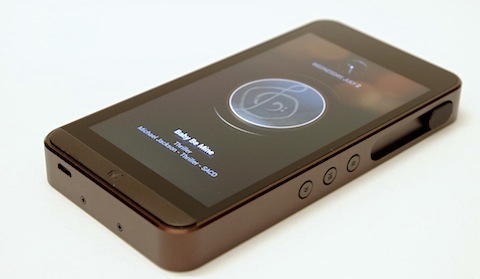 FINALE: Audiophiles are long used to buying products with planned obsolescence – years down the road, these products work just fine but there are other more desirable and perhaps technically superior ones available. The IT industry works differently, and indeed, has reached its long arms into various fields, including audio. Thus, the Calyx M, thanks to firmware updates, will stay in the tech game for a while. However, what this means is that early adopters may get a product that not wholly bug-free (as in this case) but reaches is true potential only with subsequent firmware upgrades.

The player left me in no doubt over its sonic capabilities even from the first session, but I was less than impressed with its workings until the firmware upgrade. The final outcome, before this review was written, was more pleasing, but I think it will get even better in the future. If you’re looking to move beyond and ahead of the iPod and its ilk, the Calyx M warrants a recommendation, purely on sonic capabilities.