Exogal Comet DAC… out of this world

“Excuse me, what was that again?” I asked.

“Exogal. They are a new outfit formed by the people previously behind Wadia,” the Editor repeated to me. “Haven’t you heard of them?

“They’ve been getting good publicity in the audio show blogs. They’ve been super nice to send us a review sample even though they have no direct representation in Malaysia yet.”

I confess that when I heard the name, it sounded like that of a product from Exogear (maker of car hands-free cellphone mounting products) or even the name of a superheroine Marvel’s writers could have come up with when the creative juices were not flowing (they’d then seek to bury it as quickly as possible on account of its corniness – ‘Comet Boy’, ‘Exo Gal’, you get the drift).

Exotic name aside, one can’t help but be impressed when one looks at their product, the Exogal Comet DAC, in the flesh. It instantly gave a positive impression akin to when first encountering the latest MacBook Air (which I think is a really nice machine).

So what’s in the company name then? Well, “Exo” means “out of this”, and “gal” is short form for “galaxy”, to signify this is a company which seeks to reach beyond just the proximate stars in its efforts to turn digital bits back into music.

And if one needs name-dropping to be impressed, how about Jim Kinne, famed former Wadia Digital designer? That’s a name recognisable to hi-fi buffs who regularly read one, or both, of the “big two” US audio print magazines.

BITS AND PARTS: The Comet DAC is essentially a rectangular box but with some pretty nice curves shaped into its chassis. Constructed of solid aluminium with a black acrylic top, it looked and felt nice and robust with no visible screws (until one gets round to the back panel) anywhere to spoil its simple but, in my view, superb looks, being a great visual match for a Macbook Air connected and sited next to it.

I would have preferred the headphone jack (6.3mm plug, at the right of the unit if viewed from the front) be placed somewhere else, but I suppose it is preferable to having it on the front panel where it would have been a visual spoiler for those of us who don”t regularly use headphones.

Size-wise, the Comet is of relatively small dimensions at 4.76 x 19 x 29.2cm (h/w/d) and weighs in at 4.2kg, a not insubstantial weight for its size given it has no power supply built in, so no bulky transformers or the like near the sensitive digital circuitry to interfere with the delicate signal processing duties.

In terms of the audiophile’s favourite question of which manufacturer’s DAC chips the Comet uses, what seems clear is the company has gone about it differently by using a platform where the conversion techniques are more proprietary and drawn from the company’s principals’ extensive experience with satellite and cellular communication technology, than reliance on a bought-in DAC chips’ strengths and or limitations.

The review unit came with a “standard” power supply, an in-line switch-mode power wart, but Exogal do sell an upgraded power supply for better isolation from mains interference, as well as for claimed better sound. This is worth investigating as there was a tendency for the Comet to lose lock with the connected DVD player (via SPDIF coaxial) whenever I turned the lights on or off or switched speeds of the ceiling fan outside my room.

In terms of connections, SPDIF (BNC connector), AES/EBU (XLR jack), Toslink and USB (accepts up to 24-bit/384kHz and also DSD signals) are catered for. There is even an analogue input, though the signal gets digitised as there is no analogue path in the circuitry. Outputs are of the RCA and XLR-balanced variety. There are also HDMI ports, but these are for Exogal’s proprietary hardware only, which includes a forthcoming visually matching power amplifier.

The “feet” of the unit are unique as they consist of little ball bearings which peep through a clear acrylic block bolted to the bottom of the unit for resonance control. Another Exogal principal, Larry Jacoby, was involved in aftermarket footer manufacturer Stillpoints, but these aren’t there just because Exogal happened to pick up stocks of little ball bearings on the cheap.

If there is any complaint about the unit, it is that its display is really tiny and virtually unreadable from two steps back. Also on the titch side is the system remote; the battery died on me rather quickly. But this is of no consequence if one downloads Exogal’s app and just controls (volume, muting and input selection) and views the display on one’s IOS or Android device, connected via Bluetooth, which is what I did using my iPad.

IN CONCERT: The Comet took its time to run in, or so I perceived. After about two-three months, formal auditioning began.

Firstly, the Comet DAC didn’t have the bass heft and sonic sense of presence and solidity which the recently reviewed Naim DAC-V1 excelled at. Neither did it match the sense of timing and rhythmic acuity for which the Naim came into its own. While the Naim was darker and creamier, the Comet’s voice was one which was perhaps more “complete”, brimming with fine detail, still with richness but without etch and artifice. The ability to convey light and shade of proceedings was where it could leave many a DAC at the lower price ranges feeling envious.

Comet’s treble also had a different feel to most DACs or CD players I’ve heard. It had a sense of extension and continuity, while different from vinyl through a good moving coil cartridge and phono stage, was very satisfying in its own terms. Unless inherent in the music file played, the treble was virtually grainless.

Also impressing were the sense of separation and detail in the midband, which was also rendered with a good sense of authenticity. I really appreciated this on recordings of choral singing. 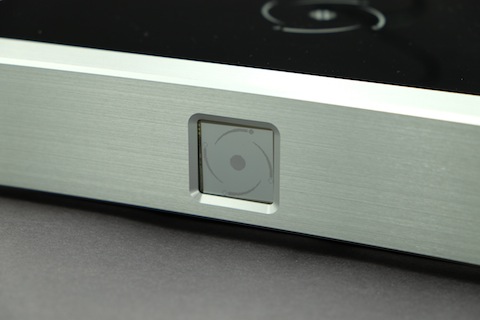 Bass was where I felt that, while very good in terms of tautness, clarity and extension, things could have been better in the “meatiness” department. We all have our preferences, of course, and system matching will determine if we can get the best of any unit to fit our tastes, but here I really missed the sense of bold colour the Naim DAC-V1 showed, and for which I similarly enjoyed for many years through my much missed ancient Monarchy Audio 22A DAC.

Things did get better in the context of the test system when running the Comet through a transformer volume control than to the power amp directly, so this may be due to electrical matching issues rather than an aspect of the performance of the DAC section.

Overall, while the Comet did not create the largest or most palpable sonic picture I have heard with a digital source, it was still a very engaging and satisfying listen, easily leaving a less ambitious workman-like DAC like the ADL-GT40 behind. It’s the kind of DAC I would choose if I wanted better ability to analyse the music without losing musical enjoyment.

Comet’s transparency, however, meant it was more demanding of the files one fed into it – some of the MP3 files I found enjoyable via the Naim DAC-V1 and even the ADL GT-40 were sometimes less so through the Comet, as the clearer window meant one noticed the deficiencies more.

What of the analogue input? I applaud the company for including this as there’s a very good chance someone buying a specialist non-professional DAC at this level will also own a quality analogue source – these guys sure know who their likely customers are! I can only say that while I did prefer the results of the vinyl front end through the transformer volume control in my system, the ADC-DAC and digital volume control path through the Comet didn’t sound like there was any perceivable distinct signature being imparted onto the music which came out the other end.

It sounded very much like my Euphonic Research ATT-600 stepped attenuator volume controller, essentially neutral. Again, electrical connection characteristics may be more at play in the final result, but I think I could adapt to and live with this, even if the idea of having my music on vinyl go through digital processing is mentally, though not sonically, in this case, challenging to accept.

The headphone output was perfectly adequate for my trusty ancient Sennheiser HD-414s, but I felt the sound had slightly less heft at lower volumes compared with that from my ADL GT40 DAC/headphone amp. Users of more demanding cans who place emphasis on this feature should check out the output with their own headphones to see if it fits their requirements.

APPLAUSE: The Comet produces genuinely fine results, which clearly reflect the experience of the principals of the company and is welcome breath of fresh air where so many DACs in the market are touted on the use of this-and-that much famed bought-in chipset in its design. Sonic results are ahead of most of the DACs I have heard, with the caveat that my experience is more limited compared to some others out there, given my limited financial means and relatively limited hi-res digital music files collection (I have no DSD ones, for example). I did feel the Comet turned the high quality hi-res music files I happen to have into an engaging experience.

BUT… : It’s a clearer window than most, so one should best make sure that one is able to still enjoy the lesser quality recordings or files in one’s digital music collection while reaping the benefit in performance increments for the really well recorded high resolution ones.

FINALE: A very good DAC then, from experienced industry veterans who know what they are doing. The Comet’s proprietary processing platform allows the manufacturer a measure of future proofing of the unit to protect their customers’ investment which other manufacturers cannot claim to equally provide. All the right boxes ticked, the Exogal Comet DAC deserves to be heard when buying a DAC in, and even above, its price range.