WOW. I could stop writing here and that would pretty much sum up the experience I had with the Chord Electronics Mojo DAC/headphone amplifier.

Full disclosure before we proceed – my listening veers heavily towards speakers. Headphones are called into use only where speakers are not practical, which actually happens more often than not since we don’t lug our audio systems to work and back, right? Not that I do not appreciate the accuracy and detail that headphones give… I do, but speakers are my preference.

Anyway, the Mojo (short form for MObile JOy) is a product born out of Chord’s highly-acclaimed Hugo, albeit in a much smaller shape and form. Smaller, however, does not mean diminished performance. In fact, I thought the Mojo sounded about as good as its bigger sibling – at under a third of the Hugo’s asking price. 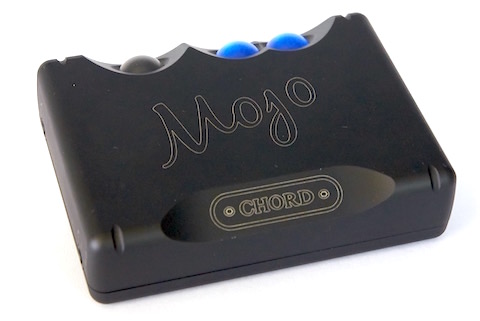 BITS AND PARTS: From looks alone, the Mojo doesn’t seem like much, but what’s hidden under the casing is where the real magic is.

It’s housed in a small black box with the words “Mojo” and the Chord logo laser-etched on the top panel. There are only three ball-shaped control buttons, and input and output connections can be found on its side panels.

The aesthetics may be minimalist, but the build quality is tank-like. The chassis, measuring 22 x 82 x 60mm (h/w/d), is made out of aircraft-grade aluminium (“precision machined from a single solid block,” Chord says) with a silky smooth matte black finish. With its 180g weight, and the Mojo has a nice hefty feel to it and is heavier than you’d expect it to be.

That’s on the outside, but inside, the Mojo is a real powerhouse. Similar to the Hugo, Chord employs a FPGA (field-programmable gate array) circuit as the Mojo’s DAC, instead of the ready-made DAC chips typically used by other manufacturers. In case you’re wondering, an FPGA allows the user to program to fit his specific needs (you can read what Chord does with the FPGA and why, here.

In the Mojo, this has been programmed to decode both PCM and DSD digital signals at staggeringly high 768kHz and quad (DSD256) rates respectively! You won’t find anything commercially available at these resolutions, so the Mojo is pretty much future-proof in this regard. 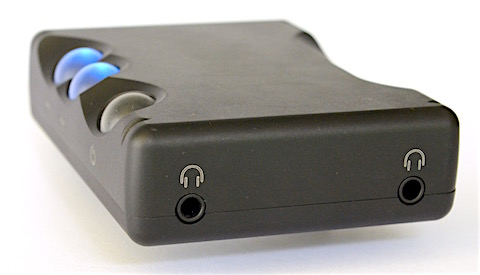 The Mojo is also fitted with a rechargeable Li-Po battery, which is good for a playing time of eight hours and charges fully in half that time. Note that the unit heats up a fair bit during use and charging, and gets worryingly hot if doing both simultaneously. Chord has addressed this issue directly (in multiple instances, too) and says this is to be expected – and anyway, the Mojo has a protection circuit that will shut down the unit if it overheats. While the reassurance is welcome, it still remains disconcerting that the unit can build up so much heat.

There are three input options on one of the Mojo’s side panels, but all for digital sources (USB, coaxial, and optical) only. Both the USB and optical inputs are the usual micro USB and Toslink types respectively, but the coaxial unconventionally uses a 3.5mm minijack. Sadly, there is no adaptor provided, or any other accessories save for a very short USB to mini USB cable.

There is no line-level input on the Mojo, which makes it impossible to bypass its DAC function and utilise the headphone amplification function only (but as we shall see, why would you want to?). Note that the USB input is the default input, and this has to be disconnected before you can use, in order of priority, the coaxial and optical inputs.

Over on the opposing side panel are two 3.5mm minijack analogue outputs, which also double up as line-level ones. Once again, you’ll have to find your own minijack to RCA cables/adaptor to make use of the function.

The Mojo is bereft of control buttons, save for the three translucent balls for power and volume control. These are backlit, and Chord has implemented a clever little colour scheme to indicate what the unit is up to.

The incoming signal resolution is indicated by the colour of the power button – for example, red for 44.1kHz, blue for 192kHz and white for DSD. The Mojo is capable of very fine volume control and cycles through the colours and adds a tint (red, neutral and white respectively) to show which level it’s at. 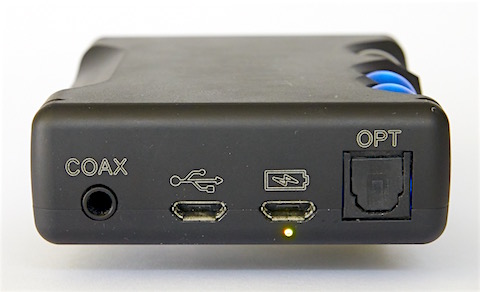 IN CONCERT: I won’t beat around the bush – the Mojo’s sound is quite simply, stunning. Whether used with headphones or as a DAC in a hi-fi system, it never once put a foot out of place and constantly excelled.

As Mojo was designed predominantly for mobile and headphone use, we’ll start there. As with all Apple iDevices, you’ll need the camera connection kit (CCK) before you can pair them with external devices or DACs.

The Mojo functioned just fine with my iPad Air and iPhone 5s, and I ignored the “the attached accessory uses too much power” message, which popped up when plugging in just the CCK (I hadn’t connected the Mojo yet). I did not get to pair it with an Android device as I don’t own one, but all you’ll need is an “on-the-go” cable, which has micro USB plugs on both ends.

To pair the Mojo with a PC, you’ll need to download the drivers from the Chord website and use the appropriate software. For Mac users, it is simply plug and play.

And so the music flowed and flowed… and kept on flowing. The Mojo is such a joy to listen to that it’s easy to get engrossed by the tunes coming through. Everything that comes through just sounds “right”. You want extended and punchy bass? Check. Loads of detail and excellent treble extension without brightness? Yup. A seductive midrange to bring out the best of vocals? You got it.

Frankly, though, dissecting the Mojo’s sound by these absolutes doesn’t tell the whole story. It’s the way that it depicts the human voice, how it presents the drama and suspense of an orchestral work, the intimacy of a three-piece acoustic band, and so on and so forth. There’s just this palpability and tangibility to the sound that make the music sound more real.

The higher the quality of recording you put through it, the better it gets. While it can make lossy compressed MP3 files sound a lot better than ever before, the Mojo will show them up for what they are.

Interestingly, the Mojo does a very good job with CD-resolution 44.1kHz material. While it may not make CDs sound like vinyl, it lends an analogue-like smoothness to the music. 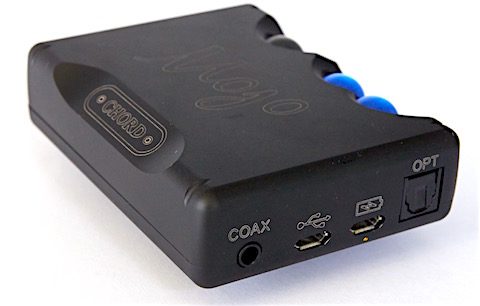 The Mojo also has loads of power on tap, seemingly enough to drive even the most demanding of headphones. It could drive the resident HiFiMAN HE400i to ear-splitting levels cleanly. I discovered this empirically during one particularly hard-rocking session, which left me with some ringing in the ears afterwords, so watch that volume, people.

On the other end of the spectrum, the Mojo’s volume control is fantastic for sensitive IEMs. Not only is the Mojo dead quiet, but it offers precise volume control in very small steps, so you can always find the right listening volume.

So the Mojo is great with headphones, but that is not all it can do. I tried it in all scenarios – a full-blown hi-fi system, active speakers, a desktop system and even in the car!

Even in the hi-fi system, the Mojo stood its ground – even when compared with “proper” audiophile DACs, some costing many times more than the Mojo. And since the Mojo offers volume control, you can connect it directly to the power amplifier, which is quite an experience, I tell you!

What I did not expect, however, was the setting where the Mojo most impressed – in the car, plugged into the auxiliary input paired with a mobile phone! Not only could I play high-resolution material while on the road, I was essentially using a high-end DAC as the source! In fact, I’d be as bold as to say this is one of the best upgrades you can find for any car stereo system!

Just a quick note about how the Mojo compares with the Hugo. It may cost about a quarter of the latter, but performance levels are so close you can’t justify the disparity in price. There is a similar “house” sound, but the Mojo sounds slightly warmer and has a lower noise floor, and the Hugo also brings out a bit more detail and sounds a little faster.

APPLAUSE: In my opinion, almost everything about the Mojo is worthy of praise. There is nothing about its performance to criticise, and being able to have it in such a small form factor is a bonus.

BUT…: Gets very hot when playing and charging simultaneously. Absence of accessories save for a very short USB cable – Chord should have at the very least included an adaptor for the unconventional coaxial input.

FINALE: I’ve tested a fair bit of gear in my time, and few products have impressed to the level the Mojo has. No matter where and how it was called into use, it never disappointed and surpassed all my expectations. How highly can I recommend it? Very. So much so that I bought the review unit.