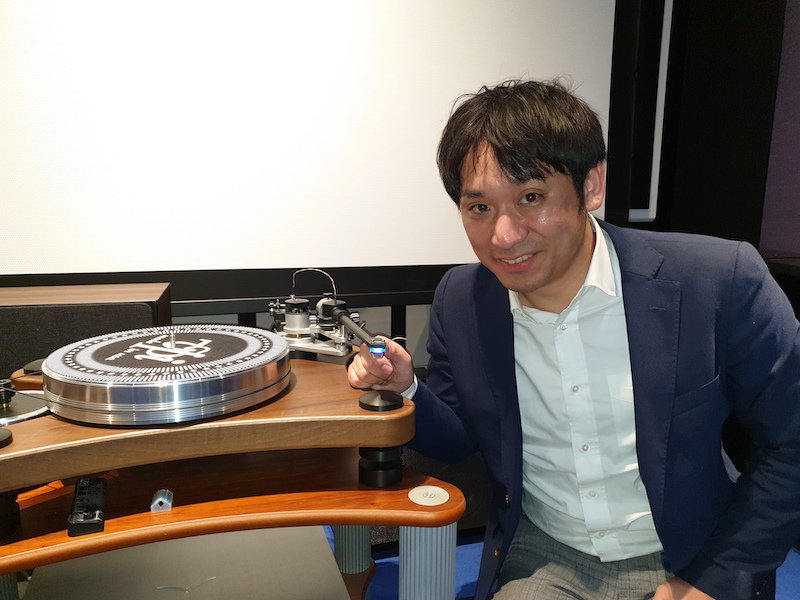 HAVE you ever been curious about how stuff works and jumped deeply into it? That’s what Tetsuaki Aoyagi (32, and popularly known as Aki San) did as an aspiring young engineer who founded DS Audio.

The Japanese company’s range of optical cartridges was launched in Malaysia by Centre Circle Audio on Saturday, and Tetsuaki, who is DS Audio president, was present to meet analogue enthusiasts who had dropped by hours earlier.

Tetsuaki grew up in the digital domain. His first taste of analogue came when he was presented with a turntable – he was curious how a rudimentary transcription technology based on a needle scratching in a groove could produce such good sound. He had difficulty accepting what he understood, as an engineer, as design flaws in moving magnet (MM) and moving coil (MC) cartridge design topologies, against what he felt could potentially be achieved.

Surely the music would sound better if he could change the design to remove the undesirable eddy current generated or perhaps doing away with the RIAA curve required to suppress exponentially higher voltage generated in existing cartridge engines from the higher frequencies to reproduce the original recording.

“I found an innovative design for an optical cartridge made by Toshiba in the 1970s and studied it in detail,” he recalled.

“It was a simple, Toshiba used a screen mounted on a cantilever positioned between an incandescent lightbulb and a light sensing diode where the screen moved along with the movements of the cantilever, hence varying the amount of light received by the light sending diode.

“Although the design was ready for the future at that time, the technology wasn’t mature for the optical cartridge to perform reliably. There was too much heat generated by the incandescent lightbulb and it softened the rubber bush holding the cantilever. You get more errors when it softens from the first track to the last track. No consistent music experience,” Tetsuaki added.

Given his family’s heritage (Direct Stream Corporation, an innovative optical sensor company founded by his father Tetsuji) in the forefront of optical sensor technology, with breakthroughs such as the optical mouse (developed jointly with Microsoft Corp), he explored further. 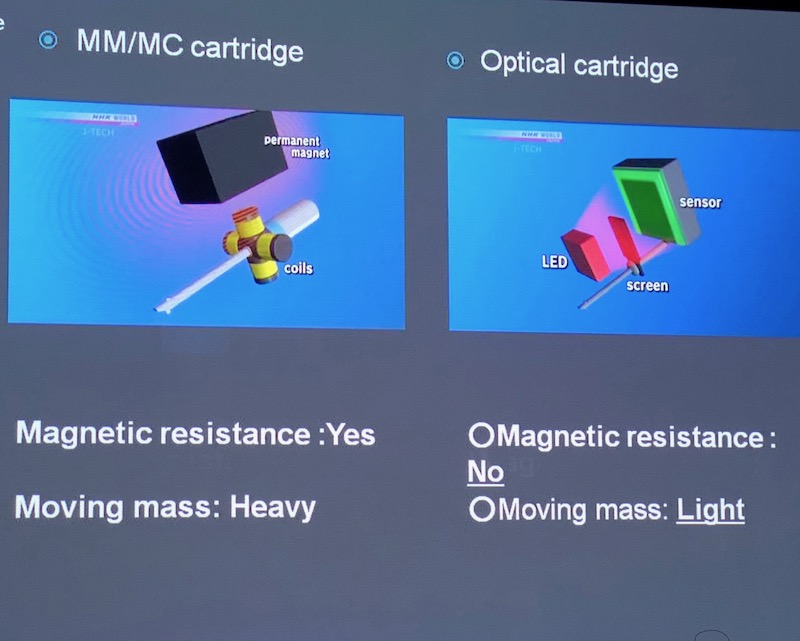 “I decided to explore the notion of using modern optical sensors with illumination provided by a cold light source as an alternative, drawing on the expertise at DSC.

“Conceptually, the design topology remained the same with the only difference being the choice of components deployed. I resolved the heat issue by choosing an Infrared Light Emitting Diode (IR LED) for illumination and used a modern photovoltaic sensor like a solar panel to provide an efficient means to convert IR energy into electricity.

“The screen mounted cantilever remained. The design also meant that magnetic resistance generated by eddy current was eliminated and there was less resistance to the lighter cantilever accurately transcribing in the absence of a magnet array or voice coil mounted onto the cantilever. It was a simple solution.”

The DS Audio optical cartridges often get mistaken for digital devices but this is far from true.

“Our optical cartridges are actually analogue devices; people tend to relate ‘optical’ to digital. Maybe like Toslink or laser turntable.

“Let me explain,” he added.

“When the cantilever starts to move against the record groove, the screen that’s mounted on it will block some of the light coming from the IR LED, hence varying the amount of voltage generated by the photovoltaic sensor. This creates an analogue waveform with varying amplitudes that mirrors the recording transcribed onto the vinyl record.”

He explained that there was no need for an RIAA curve with DS Audio’s optical cartridges, each of which comes with a dedicated “equaliser”. 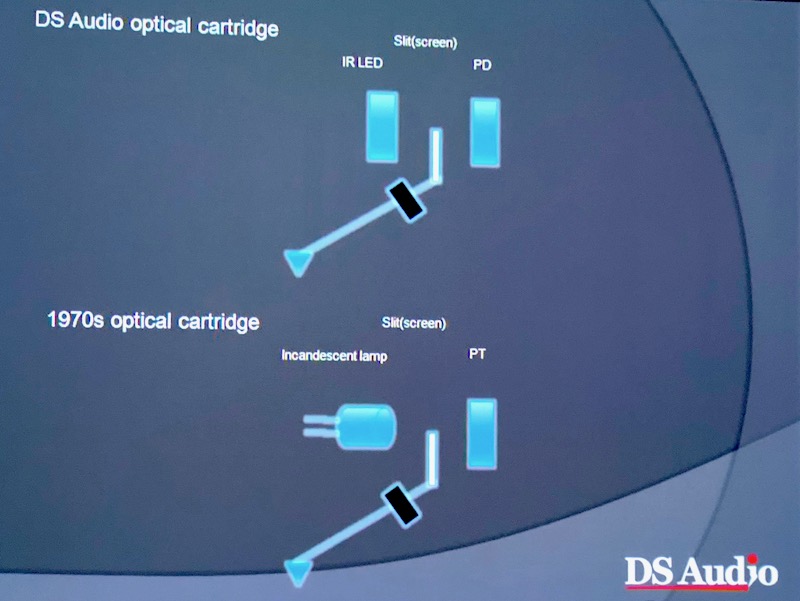 “There is no need for RIAA to overlay the resulting waveform as voltage is no longer correlated to frequency. Our analogue waveform is reproduced more accurately and relayed through an equaliser, and subsequently becomes the output signal that’s fed directly into a preamplifier or integrated amplifier. You don’t need an RIAA phono stage.”

DS Audio does not publish cartridge compliance figures and Tetsuaki explained that the cartridges were suitable for medium mass tonearms; he recommends shorter tonearms as he believes it makes DS Audio products sound better.

I was excited that he was using a vintage Yamaha GT-750 turntable in his video for demonstration as I have the same turntable; I asked if he used it to voice the cartridges.

He smiled and said: “It is very good and can compare to more expensive turntables. I like the sound. We are also using Techdas, Technics, VPI and a few other turntables to achieve the results that I want.”

When asked about the presence of two line outputs on the equaliser, he explained the thinking behind this.

“I designed a choice of two outputs where a 6db roll-off is applied at 35Hz and 50Hz respectively. Playing back warped records causes very low frequency rumble and I used the 35Hz roll-off to filter that out. Sometimes, you get resonance resulting from the tonearm and it usually happens at a slightly higher frequency. The 50Hz roll-off is designed to resolve that issue.

“Two outputs also allow for system matching flexibility where you let your ears decide the best output to select.”

During the demo, the DS-W2 and DS-002 were heard action. A brief listening session with a selection of records brought from Japan revealed much of the excitement generated by the optical cartridges. To my surprise, Tetsuaki brought along one of my favourite Japanese singers of yesteryears, Hibari Misora.

“Very popular in Japan,” he said. I had also brought along a selection of albums but fished out Dean Martin’s Dream with Dean to accompany the excellent vocals of Misora.

Although the playback was a tad too loud for my liking (but this is customary at such events), I can only say that the “entry-level” DS-002 (US$5,000/RM25,000) laid the foundation for great expectations in my home system.

Even better, Tetsuaki revealed that a more affordable model is on the way using the same design topology and targeted at a wider market – it will retail at US$2,500.

“It will come with a smaller matching equaliser and different stylus,” he said.

The future is now here, now comes the big question, have we arrived?