Cyrus ONE HD – one for all 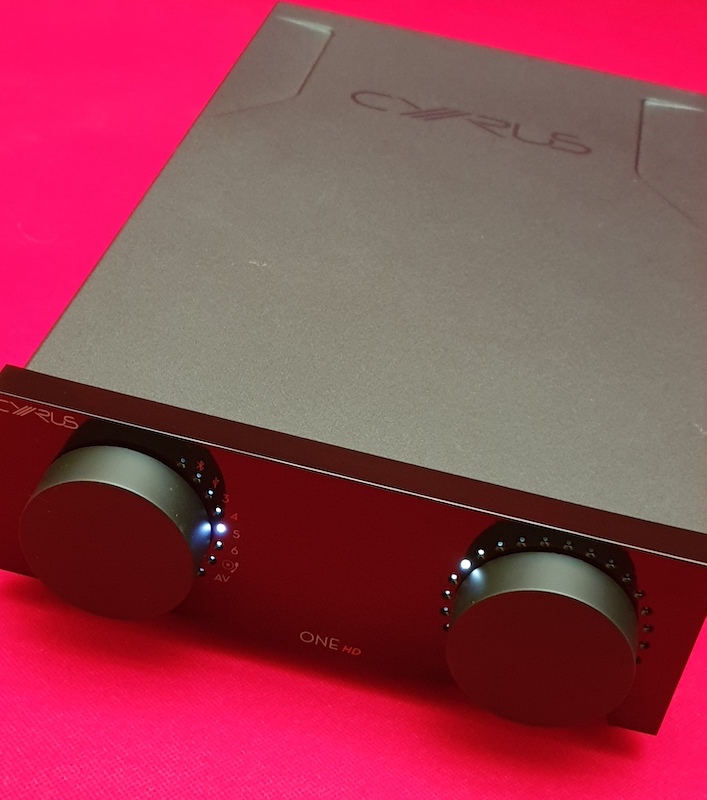 + Detailed, involving sound, with large sound staging; open midrange, with nicely balanced upper end and good extension; fast and lean bass and good pace, rhythm and timing; very fine passive MM phono stage; good digital and analogue connectivity with a fine internal DAC.
– Stage depth isn’t quite as deep as more esoteric amps; tonal balance can be a little lean with some speakers; can also be a bit cold if not matched well with the right speakers; volume always set low on powering on; no IR remote, companion app can be a little fiddly sometimes.
Sound: 8/10
Value: 8/10

CYRUS has been in the electronics business for quite some while, first as a spin-off from Mission, but now on its own with a line of mid-to-high-end electronics which have won plaudits from many customers and critics.

When the chance came to review this amplifier, I jumped at it, as the very first truly hi-fi amp which I bought with my own money was a Mission Cyrus One Mk II – an amazing little shoebox unit which could embarrass amplifiers in price brackets above it.

Fast forward more than 25 years and the Cyrus ONE HD is here, still in the half-width shoebox chassis, but electronically, all has been revised. Bringing it right up to date is a plethora of inputs: Bluetooth, with aptX HD capable, as well as aptX and fall back to SBC. A USB-B input serves as an asynchronous digital input, capable for PCM up to 32-bit/192kHz and DSD64 and 128. Optical Toslink and co-axial SPDIF inputs accept PCM data up to 24/192. On the analogue side, there is an MM phono input and three line-level phono inputs, one of which can be configured for fixed-gain AV application.

There are two sets of speaker outputs per channel – which make bi-wiring a doddle – driven from Class D amps specified for 100W per channel into a six-ohm load. There is also a quarter-inch TRS headphone jack running off a Class A/B headphone amp.

The case is true to Cyrus design, being a well-built and dense half-width unit with a source selector knob on the left, and the volume on the right (a digital encoder with LEDs show your volume setting). The power switch is a push button under the source selector. No tone controls as such on this amplifier, given its fairly “purist” approach.

There is no supplied remote control, but a companion control app (available on the Google Play and Apple App stores) connected via Bluetooth worked well, though adjusting the volume can be a little fiddly – the main volume slider is capped by a max volume setting in the settings pane.

SETTING UP
I tested the ONE HD with a variety of sources – Roon server to a Sonore Microrendu driving the USB input, a Sony HAP-Z1ES via analogue single-ended, Bluetooth from an Astell and Kern Kann for aptX HD transmission, vinyl courtesy of my Denon DP80/Micro Seiki MA505X arm, with an Audio Technica VM 540ML MM cartridge, EAR 834P phono stage as well as the onboard phono.

On the outputs, I tested the amp with a pair of Q Acoustics Concept 500s as well as two pairs of LS 3/5as driven in parallel in a double formation (per Ken Kessler’s suggestion in HiFi News and Record Review). I also tried out the headphone output with a pair of Focal Elex headphones.

LISTENING
I kicked off the listening with vinyl – I was curious to see how the onboard passively filtered MM phono stage would perform. And perform it did! On Kenny Dorham’s superb album Una Mas (Blue Note ST 84127, Japanese reissue), the onboard phono showed a great amount of clarity and finesse, with a sure-footed sense of timing. Midrange clarity was superb, showing the finesse of Rudy Van Gelder’s engineering. The studio’s acoustic was well portrayed, with a realistic decay on the cymbal work.

Progressing to a more modern recording, a German pressing of Keith Jarrett’s Standards Live (ECM 1317) was spun next. This is superbly recorded and engineered, with the live venue’s ambience lending a lovely backdrop to the trio’s playing, especially highlighting Jack DeJohnette’s drum work. The ONE HD showed a very even-handed touch with vinyl playback. I made a quick comparison with my EAR 834P – the EAR had more air and more liquidity in the midrange as well as being a touch warmer, but the onboard phono acquits itself well – you will not need to upgrade from it for most MM setups.

Switching gears, I then played a selection of tracks from the Sony HAP-Z1ES through the analogue inputs. It was apparent from the get-go that this combination had a lot of resolution – the ability to discern threads of music was apparent, but not in an analytical fashion. This was most apparent when listening to Lisa Batiashvili and Daniel Barenboim’s Deutsche Grammophon recording of Tchaikovsky’s Violin Concertos (24/96 FLAC files from HDtracks). The solo violin was portrayed well, as it should, but the individual sections of the orchestra were also painted clearly, not rendered as an amorphous whole. The soundstage portrayed was also very wide, though I have heard a little more depth.

Next was the stunning duo of Hiromi and Edmar Castaneda on piano and harp – Live in Montreal (24/192 FLAC, HDtracks). The ONE HD showed great attack and realistic decay of the harp, with the piano showing similar percussive force. Again, there were good spatial cues present, which placed the duo in a believable acoustic.

Driving the USB-B input with a Microrendu running from a Roon Server, the internal DAC was shown to be a very good implementation, giving only a little subtlety to the Sony. A little drier than the Sony and not quite as crystal clear in the mids, the internal DAC is still a brilliant performer and will stand anyone in good stead for many years to come.

Finally, I played some of the same files from an Astell & Kern Kann via Bluetooth to the ONE HD, utilising the aptX HD codec, which has a nominal throughput of 24/48. It promises “better than CD quality”, and comparisons to playing the same file via the USB input and from the HAP-Z1ES were indeed favourable. There was a small loss in air and stage depth, but the overall effect was convincing with the ONE HD showcasing its strengths and even-handed tonality.

With the Q Acoustics Concept 500s: Right off the bat, the ONE HD was able to drive these floorstanders without any audible distress. The ample low end of the Concept 500s complemented the slightly lean nature of the ONE HD, allowing for a full bodied yet nimble sound, indicating that the output stages have good control and damping of larger speakers. The crystalline midrange was also apparent in full force, allowing for a very precise soundstage and good vocal projection, especially on tracks such as Macy Gray’s Stripped (24/96 FLAC, HDtracks), and good rendering of the ambient cues from that binaural recording.

With the dual LS 3/5a set up (Falcon Acoustics and Harbeth): As an experiment, I also tried driving my resident double LS3/5a speaker setup (the top speaker is mounted upside down, so the tweeters are in the centre of the stack, both speakers are driven in parallel). The dual speaker outputs from the ONE HD made this an easy task. The auto impedance sensing from the Class D output stage took the doubled speaker setup in stride and drove the combination with great aplomb. On John Coltrane’s A Love Supreme (24/96 FLAC, HDtracks) a great sense of scale and height was projected out of the stack, making for a soundstage with great dimensionality.

With the Focal Elex headphones: The headphone output is not an afterthought. Inserting a quarter-inch TRS headphone plug mutes the power amp section, bringing the Class A/B headphone amp into play. The headphone output had plenty of power and headroom to drive the Elex. There is a similarity to the output to the speakers in terms of drive and pacing, but it is hard to compare directly given the nature of the transducers. However, it was thoroughly enjoyable with good detail retrieval and an even-handed tonal balance from top to bottom.

THE LAST WORD
The ONE HD is seriously impressive integrated amp and although not really in the budget category, it is a very affordable, especially given the functionality. Every part has been designed and implemented well. You can get better performance than each part by paying for a separate component which is easily the same price as the amp itself, but you then lose the amazing integration of these parts in a very compact and well-built box.

Yes there is better, but for the price, you will be hard pressed to assemble an equivalent which will sound as good and operate quite so seamlessly. Readily recommended, with really nothing to quibble with at this price.