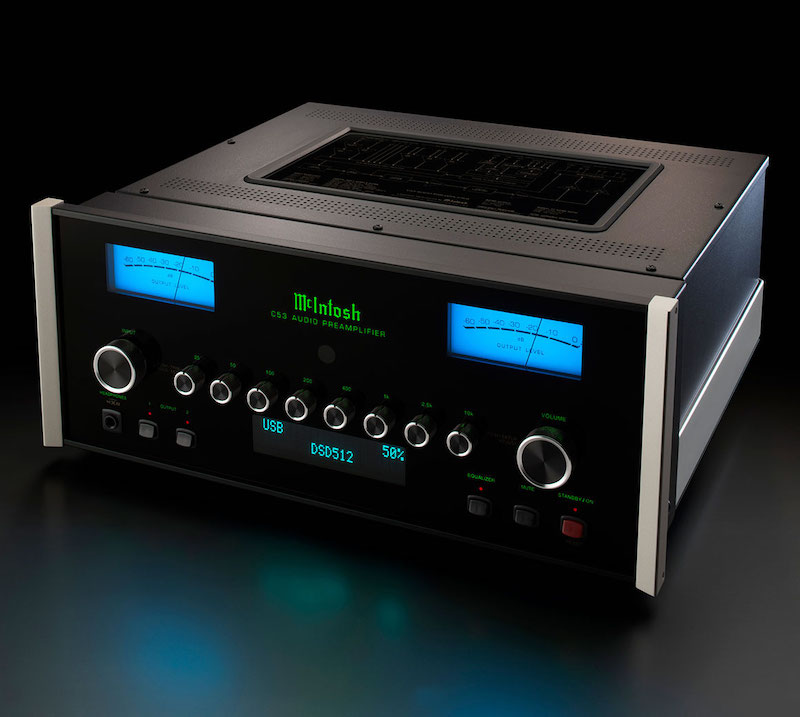 THERE’S never a dull phase at McIntosh Labs; the company keeps turning out new models – amps, preamps, digital/analogue sources, etc – with all the zest and frequency of a smartphone manufacturer! Latest in line is the solid-state C53 two-channel amplifier which, while hosting an upgradeable digital audio module, features a new unit. The DA2 module is the first to find its way on a McIntosh product.

“The DA2 builds upon the DA1 with an expanded set of capabilities. In addition to having all the same connections as the DA1 (two coaxial, two optical, one USB and one proprietary MCT for use with our MCT series of SACD/CD Transports), a new audio-only HDMI Audio Return Channel (ARC)1 connection is included on the DA2,” the company reveals.

“This allows it to be connected to TVs with a compatible HDMI (ARC) output to bring your TV sound to a new level of audio performance by listening to it through your home stereo system. Popular multi-channel audio formats from Dolby and DTS are supported and will be expertly converted to two-channel audio for proper playback through the C53. When CEC communication is enabled in both the C53 and your TV, the C53 remote can control the TV’s power and volume,” it adds.

The DA2 has seven digital inputs; the USB one supports native playback of up to DSD512 (the DA1 went up to a mere DSD256).

“This increased DSD playback support is thanks to the next generation, quad balanced, eight-channel, 32-bit DAC that powers the DA2. This audiophile-grade DAC is highlighted by both an improved dynamic range and total harmonic distortion compared to the DA1. The USB input also supports DXD up to 384kHz.”

The coaxial and optical inputs decode signals of up to 24-bit/192kHz resolution, while the MCT input offers a “secure, custom DSD connection for SACD playback when paired with McIntosh’s MCT series of SACD/CD transports.”

For tone tweaking, there’s an eight-band analogue equaliser, with each band adjustable for ± 12dB.

McIntosh claims its onboard “High Drive headphone amplifier can power virtually any pair of headphones, while Headphone Crossfeed Director (HXD) can bring an added dimension to music.”

A home theatre pass-through features enables the C53 to be seamlessly integrated with a home-theatre system.