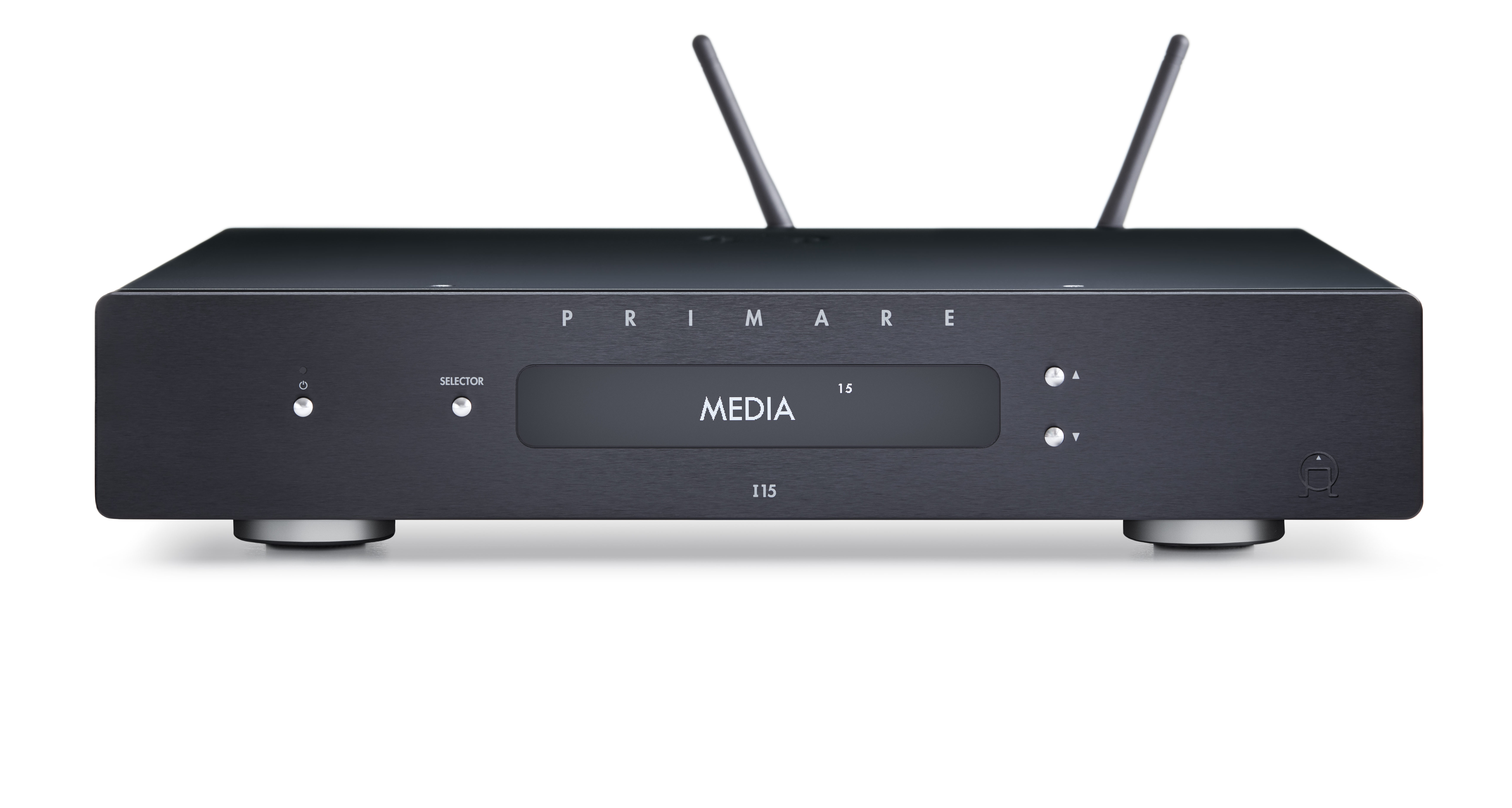 CONNECTIVITY is the name of the game with the Primare Prisma I15 integrated amplifier and network streamer. It features multi-room/multi-zone connectivity and control for playback of stored and streamed media, wired or wireless, all managed from any mobile device through a dedicated Prisma connectivity and control app available for iOS or Android.

The OLED display is crisp with a three-step dimmable functionality via the included C25 remote control. It can be configured to display all inputs or only those with signal going in and users can even customise the name of each input. Input gain can be individually adjusted and there’s a front panel lock facility as well.

The I15 Prisma outputs 60 watts per channel into eight ohms (or 100 watts into four ohms) via a class D Hypex UCD102 amplifier module fed by a custom-designed heavy-duty switch mode power supply. Primare says it uses two and four-layer double-sided circuit board construction as well as surface-mount components whenever possible.

The rear panel houses the mains power on/off button, sockets for two screw-in antennae for Bluetooth and Wi-Fi (802.11 a/b/g/n/ac compliant) respectively as well as the following array of connections – a pair each of RCA inputs and outputs, three optical and one coaxial digital inputs, a coaxial digital output, a 10/100Mbit Ethernet LAN port, a USB type-A port for a USB flash drive/hard disk, a USB type-B port for PC/Mac hook-up and a pair of speaker binding posts.

There’s also a 3.5mm stereo jack that can accept either an analogue stereo or digital signals via a mini-optical link, an RS-232 connection, IR-in/out jacks and a 12-volt trigger output. Considering the small form factor, the Prisma I15 is indeed very well decked out for all of today’s digital needs.

SETTING UP
The Prisma I15 was configured over a wired LAN connection to a TP-Link AC1200 router. Chromecast was set up via the Google Home app on a Pixel 3XL phone. The set-up process is fairly straightforward as long as one has a Gmail account. The Prisma app was also installed in my mobile. Primary listening was done via Tidal HiFi/Masters streaming over Chromecast from the Pixel 3XL.

Also used were Tidal HiFi/Masters and foobar2000 via a Windows 10 laptop using the Prisma I15 as a PC sound output device over a USB-A to USB-B cable. The latter requires the installation of the Primare xmos audio driver, which can be downloaded from Primare’s website. No driver is required for a Mac.

As the review unit was brand new, it was left to run in for a few days. Interestingly, the user manual states that the device will sound best after an initial burn-in of 24 hours and that further improvements in sound quality can be had over another three days of usage.

LISTENING
Playing Anything Else by Sarah Jarosz, the Prisma I15 sounded natural and full, with enough resolve to highlight the timbre of her voice as well as the crisp plucking of the accompanying guitar. Lady Gaga’s vocals were fleshed out nicely on Shallow, the Prisma I15 projecting her voice a tad more forward than my resident system.

The Prisma I15 had no issues grooving to Alex Bugnon’s Another Love Season, with all instruments on the track woven cohesively, albeit a tad dry. The amp’s ability to recreate depth and staging can be good but I found this varied from track to track depending on the resolution and quality of the recording.

The Class D amplifier has enough juice to drive the Elac B6.2 comfortably. Occasionally, I would crank up the volume to the 45-50dB mark and to my surprise, the Prisma I15 was able to reproduce the seismic bass notes on Please Me by Cardi B and Bruno Mars.

Jeff Lorber’s Come On Up was a fun listen, the Prisma I15 producing punchy dynamics, good bass grip and very respectable pace, rhythm and timing. I actually grew to enjoy using the Prisma I15 as I could access my music library from my mobile device with so much ease and just stream tracks almost instantaneously while occupying myself with other things. So much so, I found myself spending more time listening to my favourite tunes than I otherwise would with my non-streaming resident system.

For the most part, streaming to the Prisma I15 was trouble-free. I did experience occasional drop-out via Chromecast streaming but could not determine whether it was caused by the network or device – though I suspect it could be an interoperability issue between the Prisma, Google Home and Tidal apps as all these apps overlapped with basic control functions such as play, stop and volume control.

Another issue I had was the inability to cast Tidal Master tracks via Chromecast. Every time I tried doing so, Tidal would revert to HiFi instead. The Prisma design brief by Primare states that Chromecast provides a direct connection between the device and the preferred music service through the network, thus playback quality is limited only by the quality of resolution provided by that service. A Google search wasn’t so forthcoming, but some a few forum posts indicate that others, too, have had no success in streaming Tidal Master via Chromecast.

But I did find a work-around to this by using the Prisma I15 as a PC sound output device via my laptop. This approach taps into the built-in AKM DAC AK4490EQ chipset.

Strangely, after connecting my laptop to the Prisma I15 via the PC/MAC input, I loss volume control on the C25 remote control. I did not attempt to troubleshoot the situation instead I just used the physical volume control buttons on the front panel, which worked, and set volume to 50dB and did all smaller volume adjustments via the laptop/Tidal/Google Home volume control function.

There was no huge change in tonality via playback through the PC/MAC input but tracks on Tidal Masters sounded more open, airier and more refined with added headroom and depth. The Prisma I15 also maintained its characteristic smooth, clean sound during playback of high-resolution albums such as Songs From The Big Chair by Tears For Fears (24-bit/96kHz) and Anita Baker’s Rapture (24/192) via foobar2000.

On a few occasions, I detected some slight shrill peaks on the Anita Baker track but overall, there was nothing I found too distracting to make me lose sight of enjoying the playback experience.

The Prisma I15’s AKM DAC is respectable but I decided to do a short A/B comparison with the Chord Mojo DAC and found the former to be wanting. The Chord sounded fuller and more organic with a much wider soundstage and dynamic range. But the Mojo can only do a fraction of what the Prisma I15 can, so in the grand scheme of things, the shortcomings in the AKM DAC is not a deal breaker to me.

THE LAST WORD
From a usability standpoint, the Prisma I15 has its quirks – namely the Prisma app, which for some reason is designed for devices with screen sizes of seven inches and above. This makes the app not so universally applicable for most mobile devices. Also, there were the occasional dropouts in Chromecast streaming and overlapping basic control functions via the Prisma, Google Home and Tidal apps.

Another peculiarity is the legibility of the metadata on the OLED display. The OLED display does provide easy reading of the input sources but when artiste, track and album info is displayed during streaming, I could hardly read it while seated about 1.5m away because the font size used is small (looked like 10pt font size).

Quirks aside, the Prisma I15 offers a well-rounded, smooth, clean sound with a touch of refinement – in essence, Primare’s entrée to its range of higher-end Prisma components. It is not made for the discerning audiophile, but it is more than enough for the casual, everyday listener. This integrated amplifier/network player is very well specified, with all the latest tech and connectivity one would need packaged nicely in a small but beautifully design form factor. It is a winning combination for anyone seeking an all-in-one streaming solution for the modern home.