The Pegasus DAC, a natural smoothie 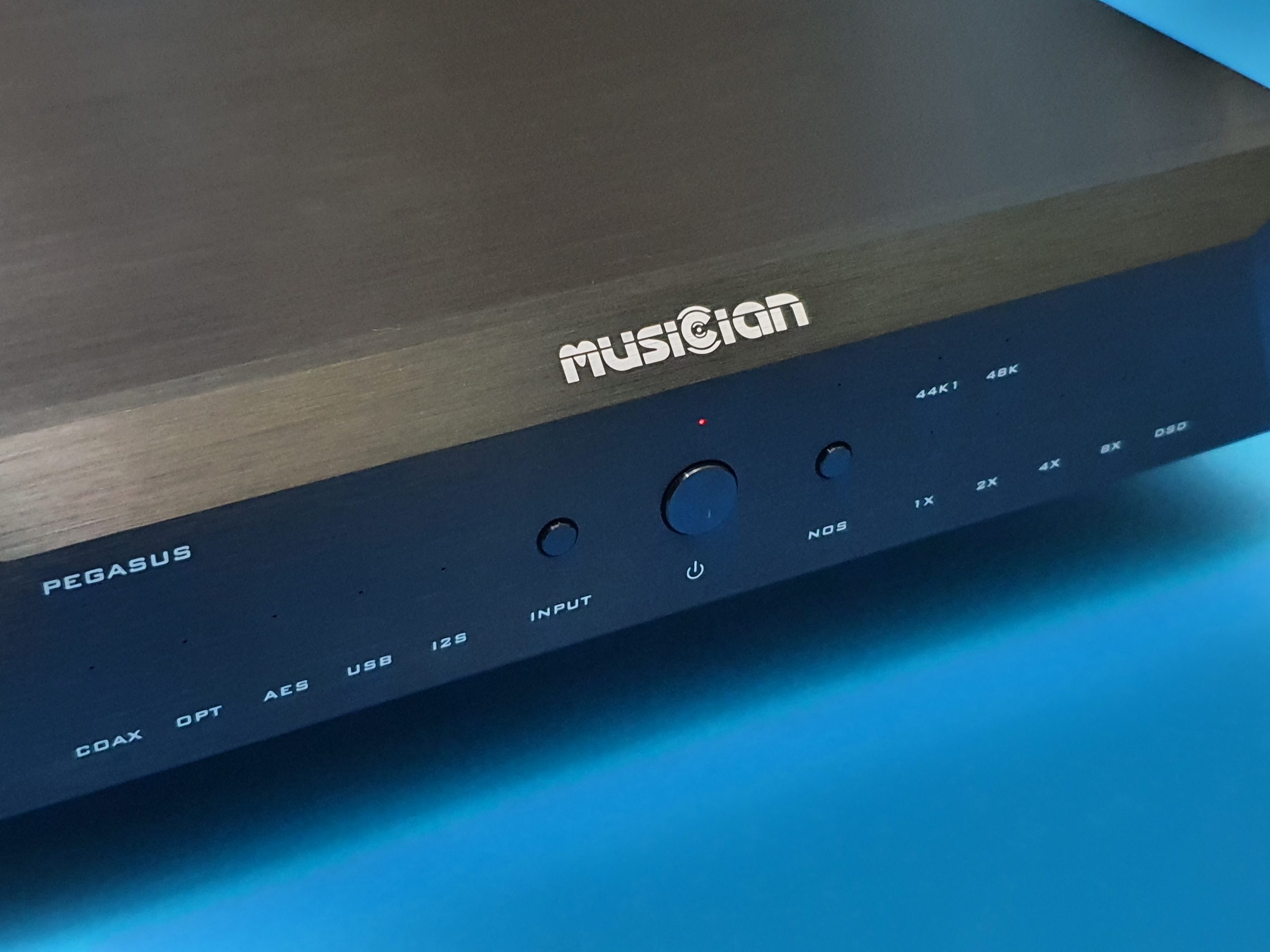 + Safe and pleasant tuning; smooth R2R sound with no edginess or grunge; believable soundstage; instrument separation has a good depth; natural timbre.
– Not the final say in resolution; a remote control would be nice for the money.
Sound: 8/10
Value: 8/10
A guide to the ratings

EVERY now and then, we receive a component that challenges our approach in its evaluation. Take for instance, this DAC we have now on the testing bench, the Musician Audio Pegasus. It is an R2R architecture DAC capable of DSD1024 and PCM1536, and sports a cornucopia of digital inputs.

Musician Audio is a very young company. Founded as recently as 2020, that makes it barely over a year old now and already, there is a selection of R2R DACs, a balanced headphone amp, a balanced preamp, and a digital USB transport. Chances are, if you are here through Internet search, you would know pretty well that the Musician Audio Pegasus bears an uncanny resemblance to Denafrips’ products.

The build quality matches the price point, the unit is very hefty, the panels are 6mm thick while the front panel is 14mm, and the IEC power inlet is a Furutech. What bothered me was, looking from the back, the Pegasus is a splitting image of the Denafrips Venus (and Pontus, and Terminator), from the selection of fonts down to the curvature of the panel edges. The front panel has different multi-faceted cuts to it but the button layout and the pinhole LED indicators are similar to Denafrips.

All signs point to them coming from the same factory, however, both companies are keeping mum about it. I’m more inclined to conclude that Denafrips is the OEM manufacturer for Musician Audio since Denafrips does manufacture OEM products. Rightfully so, OEM manufacturers are required to adhere to non-disclosure agreements, so we probably wouldn’t know for sure what’s happening behind closed doors – at least in the near future.

Now that we’ve got that out of the way, let’s proceed with the unit itself.

Being a pure DAC, the controls for the Pegasus are very simple. There’s a button to cycle through the inputs, a standby/on button, and a NOS button. No, car freaks, the last isn’t a button for the nitrous system. It actually toggles the sampling mode between non-oversampling (NOS) and oversampling. There are also two sets of light showing sampling rate and sampling rate multiplier/DSD.

On the rear panel, the Furutech IEC power inlet is a nice touch as mentioned earlier. There are five digital inputs in total – coax, optical, AES, USB, and I2S. For I2S compatibility, Musician Audio has listed the steps to cycle through the different I2S modes. If in case your source won’t match with any of the modes, Musician Audio suggests making a custom HDMI cable according to the pin diagram provided in the user manual.

The Pegasus is a fully balanced R2R DAC, and to accommodate this, it has a pair of balanced XLR outs at 3.55 Vrms together with an unbalanced RCA out at 2.2 Vrms. There are no variable outputs so I wouldn’t connect the DAC directly to a power amplifier unless you want to blow up your speakers.

A proprietary R2R and DSD architecture with 32 steps FIR filters takes centre stage. For PCM, the DAC operates on true balanced 24-bit while DSD is converted in a separate dedicated six-bit path. I’m quite impressed at the frequency response of 10Hz-60KHz that extends well into dog hearing territory – just to prove a point. It has a rated THD of 0.002% and dynamic range of >120dB. No corners were cut on the resistor ladder, which has very high tolerance 0.005% resistors.

SETTING UP
Due to COVID movement restrictions, I’ve been working remotely since mid-2020. The Pegasus found home on my work desk as part of my headphone set-up. Optical source was provided by a humble Chromecast Audio while the USB source was my laptop. The Pegasus also had some time with my stereo to better understand it.

Although Musician Audio claims that each unit is tested for weeks prior to delivery, the website still suggests a 300-hour burn-in for the DAC to reach maximum performance. That would equate to 12 .5 days of straight burning in, so I settled for a week instead. I didn’t find much difference before and after burning in, but I did notice the unit sounding a lot better after warm up.

LISTENING
Fresh out of the box, the Musician Audio Pegasus was alright but underwhelming. The treble extension was inadequate, and the closed-in sound could best be described as how your head would feel after scrunching your eyebrows for a few minutes. Then, I actually forgot I turned it off when I left my desk for a few hours to run some errands. What I came back to was a different performer.

Through the Focal Elear headphones, the soundstage had expanded considerably. I am a big fan of the movie A Star Is Born, so oftentimes I put the soundtrack on repeat while I do my day to day work. The Pegasus kept pulling my focus away from my assignments because listening to Black Eyes was very satisfying. The separation between crowd noise and the music was so apparent that I felt like this was a recording I had made when I performed with Bradley Cooper and the band!

I tried throwing a handful of rock and metal music to gauge the instrument separation during busy passages but the Pegasus never broke a sweat. Thunderstruck by AC/DC had no smearing of instruments whatsoever while Enter Sandman by Metallica still sounded energetic through its touch of smoothness.

Perhaps at the end of the day, an R2R DAC will ultimately sound like an R2R DAC. The Pegasus is by no means an analytical DAC, but don’t be confused, it is more than capable of resolving minute details within the music while possessing a natural tonality. Compared to the Chord Hugo, which leans more towards being analytical and aggressive, the Pegasus is laidback in comparison.

Not just micro details, the Pegasus does have slam. Oh, it does. We Will Rock You from Queen’s 2011 remastered News of The World album has a rumble in the bass department that calls for a capable transducer. And what do you know, Back In Black by AC/DC was next in the playlist so I got to feel the slam transition from stomping feet to hitting drums.

I also enjoyed the rendering of vocals immensely when I put on The Secret Life of Walter Mitty soundtrack. The minimal effects applied on Jack Johnson’s voice on Escape (The Pina Colada Song) allowed the Pegasus to reproduce it faithfully while still maintaining the fact that there’s a whole beach of people running and playing in the background. At least that’s what I concluded, judging by the sound of the ebb and flow of water hitting the seashore and some seagulls squawking every now and then. Of course, many DACs out there are capable of reproducing it – but how many can take you there?

Switching to the Hugo with the same track, I found it hard to make a choice between the two. The Hugo is more technically capable by offering a larger soundstage and a heightened perceived level of clarity, but the Pegasus was slightly more enjoyable with an intimate presentation coupled and a smoother delivery.

I pitted the Pegasus against my Technics SL-150 turntable with an SME 3009 Series 2 Improved arm and a Shure V15 Type III cartridge. The analogue stage was fed through a Garrard MRM-101 phono stage. Comparing our favourite staple – Gregory Porter’s Liquid Spirit album on both formats – brought many surprises. The Pegasus sounded quite analogue in its presentation but the real deal has a better sense of decay and timbre, not to mention a more pleasurable warmth.

THE LAST WORD
Eagle-eyed viewers would have noticed by now that I have not commented on the NOS button at all. I tried it on 44.1k, I tried 48k, I tried it with DSD, I tried it with 2x, 4x, 8x, the difference between the two was subtle at best. There is that small click when I press it every now and then, but aside from the subtly smoother attack and gentle decay with the NOS on, the difference felt more psychological than corporeal.

Well, NOS or no NOS, the Musician Audio Pegasus is still a good value R2R DAC. It is competent in its duties and has a palpable presence to it.

Is this a DAC for everyone? Maybe not, but the safe tuning will satisfy a huge chunk of that demographic while giving the other chunk second thoughts.