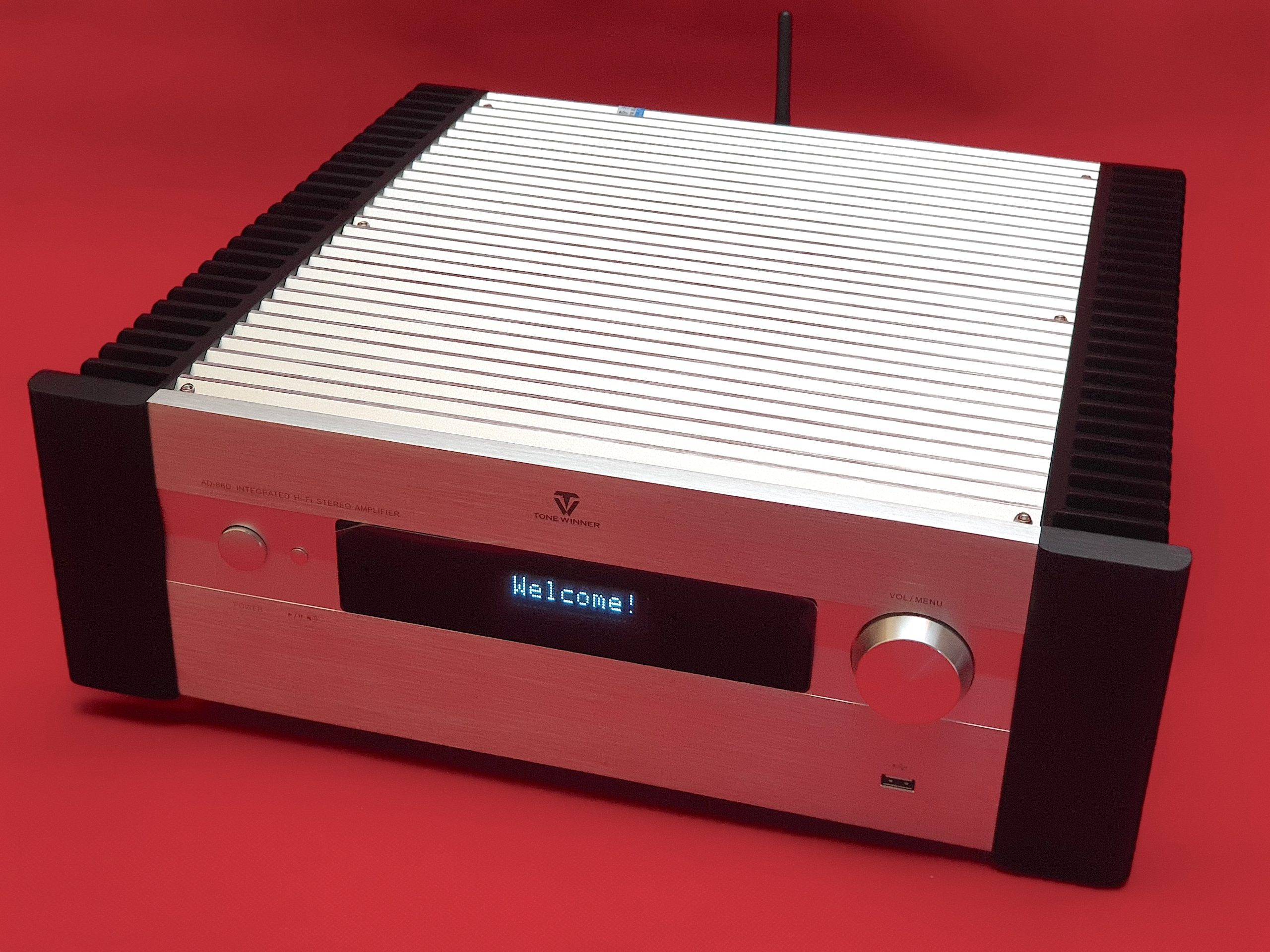 + Well-specified class A/B amplification with admirable detail and smoothness of the top end, reasonable bass depth and texture; large variety of inputs and including co-axial, Toslink, USB-B, MicroSD, USB disk and Bluetooth; flexible outputs, including pre out, subwoofer out and also power amp input; solid casework, and build quality is good, hefty weight.
– Interface is not entirely user-friendly, lots of clocking and rotating to select sources, set levels, volume, tone control etc; remote control app is in Chinese; internal DAC is serviceable, but easily bettered by outboard DAC; internal preamp has slightly odd voicing and pacing; USB input limited to 24/48, coAxial 24/192; strange choice of Micro USB jack for USB input; navigation via Chinese-language app is choppy; micro SD card slot inconveniently located on rear – unclear how this would be of regular use.
Sound: 7/10
Value: 8/10
A guide to the ratings

TONEWINNER is not a brand that most western hi-fi enthusiasts would be familiar- it is a Chinese brand that has been largely focused on the Chinese domestic market. The Guangzhou-based company has impressive manufacturing capabilities and has been designing its own products since 1992 as well as original equipment manufacturing for some established western hi-fi brands. In Malaysia, a distributor has taken up the mantle to bring in these products, positioned ostensibly as high-end hi-fi at midrange prices.

Indeed, a perusal of the specs of this amplifier indicate lofty aspirations. The hefty power supply features a 400VA toroidal transformer with 57,400uF of custom-specified low ESR reservoir capacitors. The preamp stages are based on BurrBrown OP1678 op amps and Japan Radio Company NJW1194 volume control IC. In the power amp section, the amp is specced with eight Toshiba TTC5200/TTA1943 high current bipolar transistors, four on each channel. The internal DAC is also a well-regarded Analog Devices AD-1955 chipset, accepting input from the USB, Bluetooth, coaxial and Toslink inputs. There is an optional HDMI ARC input, but this was not fitted on the review sample.

The topology is nominally stated as Class A/B, but sensing the heat from the substantial heatsinks, this is obviously biased well into Class A. Claimed power output is 120 watts per channel RMS. As impressive as the spec sheet may be, good components by themselves do not a great amp make, so I was curious to see how this fifth generation of the 86 series would turn out.

The build of the amp is solid, with a good heft to the casework, while the knobs, switchgear and connectors are well specified. The bright silver satin finish is a little too garish for an amp with high end aspirations, but this is hardly a deal breaker.

Inputs are plentiful if a little odd – three sets of single-ended RCA inputs (no balanced XLR), two digital coaxial (spec’d to 24-bit/192kHz PCM), Toslink optical (also 24/192 PCM), Bluetooth (received via a small stub antenna affixed on the rear), MicroSD card (an odd choice of format, and located inconveniently on the rear), USB-B input (but again, with an odd choice of an outmoded micro-USB B input jack, and oddly, the USB input is limited to 24/48 PCM). There is also a set of power amplifier input jacks which are strapped to the preamp outputs using two U-links.

The front of the unit has a push-button power switch on the left, a dot matrix display and the multi-function knob on the right which you can push and twist to operate. The front panel interface leaves a lot to be desired, with a convoluted push to click multiple times to set the mode from volume, input, tone control, and then twist to select. All of this makes for a bit of a kerfuffle to operate, so it is a small mercy that a small IR wand remote is also supplied, making source selection and volume control much easier. There is also a USB-A port on the front of the unit to accept USB hard drives with music files. Again, I wonder why the USB-A port is on the front when the microSD card slot is on the back panel.

Tonewinner also has an app on the Apple App store which works via the Bluetooth connection to act as a remote, and it seems to work well, except it was all in Chinese, which made it difficult for me as a proverbial banana to comprehend and operate, but with a little experimentation, it did work, though was of limited use to me.

TESTING
I tested the amp in a number of set-ups, focusing more on the analogue amplification of the amp ultimately.

Sources were a Chord Electronics Hugo2, driven by a Sonore Microrendu in as a Roon endpoint. Also used was a Rega Aria Mk3 phono stage fronting a Technics SL1200 GAE turntable with an Ortofon 2M Black MM cartridge. Speakers used were my own Q Acoustics Concept 500s as well as KEF LS50s.

I tested the digital inputs using a Topping D10s as a USB to coaxial and Toslink converter driven again by the Sonore Microrendu. I also employed an old Apple MacBook Air to drive the USB input via a USB-A to micro USB-B cable I dredged up from an old external hard disk. The USB input could not function directly driven from the Sonore Microrendu (most likely a Linux USB audio driver incompatibility which I have met with before with other USB inputs).

I also tested the Bluetooth audio input briefly, but did not do any serious listening via that input. I was unable to test microSD card input, due to lack of time.

LISTENING
I left the amp to burn in for about two days with Internet radio playing through the SPDIF coaxial input. I did not attempt any serious listening until after the burn-in period, so I have no real opinion of the unit before it was run in.

With the Q Acoustics Concept 500s
I started with listening to the analogue inputs using the Rega Aria phono stage (amplifying a re-tipped Denon DL-103 LOMC cartridge mounted in the Technics SL1200GAE) driving the RCA single-ended inputs. Off the bat, the amp showed some interesting voicing choices which will be unfamiliar to those used to western hi-fi norms. There seems to be an emphasis on the midrange, not unlike how a vintage valve amp would do, though the rest of the sonic character is distinctly solid state.

The first spin was a new Analogue Productions reissue of Duke Ellington’s Jazz Party in Stereo (CS 8127) – a lovely 33rpm reissue of a wonderfully-recorded session. The recording shone through, but the presentation was a little odd given the tonal profile. The mids take centre stage here, with a subtle emphasis on vocals. The presence band shines here, complemented with a smooth and well integrated top end. The slight oddity is the slightly recessed bass – which isn’t to say it lacked depth or volume, but rather a slight de-emphasis. This was also reflected in the timing, which was in a word, relaxed.

Switching to the coaxial and optical inputs (driven from the Sonore Microrendu via a Topping D10s working as a USB to SPDIF converter), the basic character of the amp began to become evident. The unconventional tonality was present from digital sources. The internal DAC itself was competent, with fair detail retrieval and scale. However, switching to my own Hugo2 feeding the CD input, the increase in scale and detail retrieval as well as a surer sense of the “architecture” of the music was evident, but the amplifier’s slightly odd voicing was still present.

However, running through my standard retinue of test tracks, the overall experience was pleasant, if a little lacking in excitement. Of note were well-controlled sibilance on Miles Davis’ Kind of Blue (24/192 FLAC files from HD Tracks), with a nice smooth rendition of his muted horn whilst cymbal work still had good shimmer and air. On Charlie Haden and Antonio Forcione’s Heartplay (24/192 FLAC files from HD Tracks), the bass was relaxed in pace and well rounded, though I have heard it with a bit more defined pace. Switching to something faster paced in the form of The Great Jazz Trio’s Live at the Village Vanguard Vol. 1 (24/96 FLAC rip from vinyl), Tony Williams’ drumming on the opening track, Moose the Mooche, was a little slurred compared to amps with better rhythm and timing, but it was not entirely unenjoyable. The final test was with orchestral music in the form of John Williams in Vienna (Tidal MQA stream), which was again smooth and rendered with good scale, but orchestra textures were not as well defined as they might be.

I also auditioned the amp through the mini USB-B input, but this was limited to 48kHz, and required using an old MacBook Air to drive as the input would not work with my Sonore Microrendu streamer. Although there was nothing significantly different than with the SPDIF input, the limitations make it not an input which you could use for high-res digital files. Similarly, the Bluetooth input was good, with the same basic character, though the nature of the compressed digital audio stream made for a slightly more veiled presentation as well as a smaller scale soundstage.

With the KEF LS50, and Tonewinner as a power amp
I principally listened to the Tonewinner with the LS50 as a power amp, driven directly into the power amp inputs from the variable outputs of the Chord Hugo2. Re-listening to a selection of the tracks above, this was arguably the most satisfying pairing and set up. Bypassing the preamp made for a small but significant lift in transparency, with a more “hear through” sound stage, which was also writ a little larger and with more depth. The Chord Hugo2 struts its drive and detail retrieval here even better, showing that the power amp stage in the AD86D is no slouch.

Tonal balance seemed also a little less skewed and strange than via the internal preamp. But the most telling was how the amp was able to power and control the KEF LS50s, which are notorious for being picky with their partnering electronics. All of this points to a very well engineered and designed power amp module.

As I ran through my test tracks again, it was more enjoyable, with the Hugo2 shining on every track. Compared with the internal DAC through running through the preamp section, the power amp section has a chance to show its innate qualities, showcasing the Hugo2’s ability to cast a big soundstage and place instruments with great precision and detail on that soundstage, much more so than with the internal DAC.

CONCLUSION
This unusual amplifier defines easy characterisation and thus, it is hard to make an unqualified recommendation, but there are some undeniable strengths – the power amp section itself is well engineered and has an innately fine quality. However, the preamp has some slightly odd voicing and its bass pacing falls a little short. The internal DAC also is good if not exceptional, but is likely hobbled by the preamp.

Other oddities abound – the choice of inputs, interfaces and the location of ports and sockets is questionable as well as the interface which is a little convoluted. For the aspiring audiophile who is looking for a solid 120W Class A/B power amplifier, the pricing cannot be argued – it certainly offers a lot of value. But the preamp and DAC sections are not quite up to the performance of the power amp section, which is a pity.

Thus, I would say that this is an amp to audition with much care – the shortcomings may not be of much consequence to you, and if so, the value is undeniable.