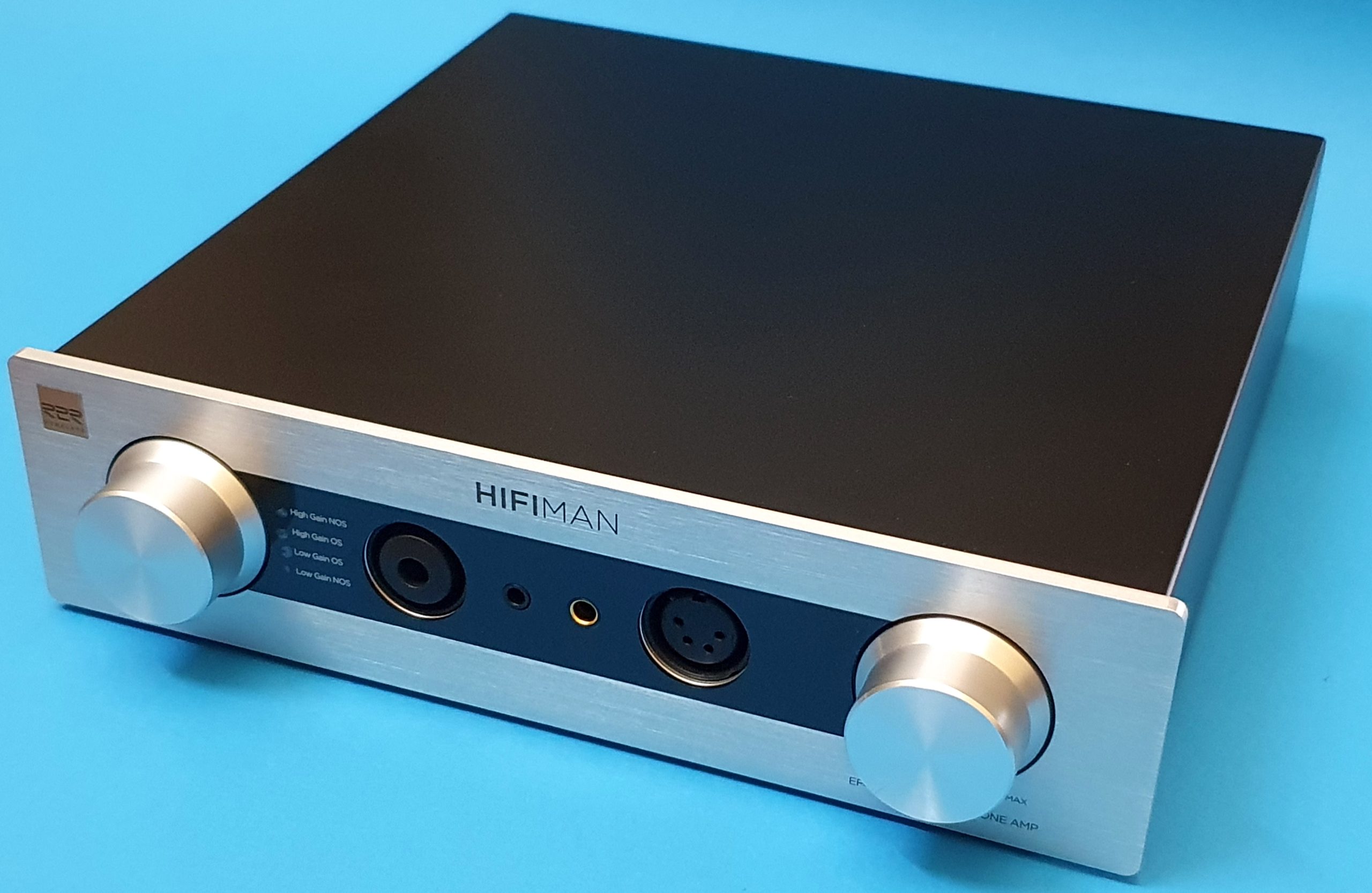 WE’RE reviewed a number of HIFIMAN products here already – the Arya, HE1000se, Ananda (pre-Stealth), and the Jade II electrostatic headphones which came with its own amplifier. All headphones, yes… but now, for something different – the EF400 desktop DAC/amp, which came out early this year.

The unit came in an inconspicuous cardboard box sealed with the product sticker. Nothing else was in the box except for the power cable (the standard three-pin UK type for our market) and a small QC card.

The EF400 is a pure balanced design without any bells and whistles. USB-B and C inputs are provided for compatible devices like computers and some streamers with USB out. No other digital inputs like optical or coaxial, and no analogue-in either.

For line output there’s a pair of RCA for unbalanced connection and XLR for balanced. Do note that these are fixed line outs and not pre outs so you’ll need a separate preamp if you’re thinking about using it with a power amplifier.

In front is where everything takes centre stage. Hifiman has provided support for almost all kinds of headphone terminations via four outputs. For balanced headphones, we have the 4.4mm and the four-pin XLR sockets, while unbalanced headphones can be connected to the standard mini and ¼ inch headphone sockets.

Build quality is average. It doesn’t feel like a premium amp, more like it was built to fit a manufacturing price point. But there are no glaring production red flags like scratchy knobs or ill-fitting panels, so the construction is solid.

Some might be questioning why the unit costs as much as it does with such a standard feature set. Well, for starters, the EF400 features HIFIMAN’S new low-energy, high sampling Himalaya resistor-to-resistor (R2R) DAC modules. The amp section is also able to push out 4.4W of power to drive even the low sensitivity Susvara headphones.

Specifications are definitely impressive as it is measured at 118+/-3dB for signal-to-noise ratio while the THD is 0.002% (balanced) and 0.004% (unbalanced). There are two Himalaya DAC modules – one for each channel, and since this is a balanced DAC/amp, the analogue section uses a four-channel fully differential amplifier circuit that outputs a maximum of 10.7Vrms at <1% THD.

SET-UP
Listening was done at my computer desk and set-up was very easy – it was just plug and play! The EF400 runs without the need of a driver on a Mac. On Windows, it will install drivers on its own but the set-up is very quick.

I tested the EF400 with several headphones – a Sennheiser HD525, Final Audio Pandora Hope VI, Hifiman Ananda Stealth, and JVC HA-S500. For earbuds, the VE Clan Zen was the one I chose.

LISTENING
The EF400 was extensively used and tested for several weeks. Since I’m on the computer all day for work, it received at least five hours of play time daily so there’s no question whether it was burned in sufficiently by the time I was done with it. I also did not notice any changes so either it requires no burn-in or had already been played a lot before I got it.

While listening, I got the feeling of a reference-level all-in-one DAC/amp exuding from the EF400. The unit sounded best when paired with the Ananda Stealth as they did the tango perfectly. With my brighter and easier-to-drive Pandora Hopes, the pairing sounded bright and prone to sibilance but its ability to retrieve minute details was still excellent to say the least.

If you’re looking for a neutral DAC/amp, then this might not be for you as it is tuned for musical enjoyment – and as such, it is very musical. The soundstage is expansive and holographic, while the black background makes instruments appear seemingly out of nowhere.

There was no noise from the unit, on all of my sensitive headphones. The black background enveloped my listening space, and the silence was so palpable that when the song The Beat Hotel by Allan Taylor started to play, I thought the low-level noise at the start of the recording was the amplifier going bad. And the transparency of the set-up meant I could hear any small noise that was present in the recording – stuff you could have missed when you monitor it with speakers.

You’ll also get a very distinct HIFIMAN house sound with the EF400. A lot of that upper mids/treble energy that we know very well from its headphones can be heard cutting through the transparent reproduction. It does make tracks like Dusty Springfield’s The Look of Love sound extra crispy due to the way she pronounces esses (“Let thissss be jusst a sssstart of sso many nights like thisss”).

I did come across some impressions that mention they sound good with lower resolution sources like Spotify but I found it to be the opposite. The EF400 is demanding when it comes to sources, so “garbage in = garbage” out definitely applies here.

Bass performance was also excellent. Put on any movie soundtrack by Hans Zimmer and you’ll notice layers on layers of textured bass with none of it leaking into the lower mids. Whether or not your headphones are bassy, you’ll definitely hear the details as long as they are revealing enough.

The mids are smooth but not overly sweet while the treble is clear and pronounced. There’s no haziness in the highs when music gets energetic, and it retains excellent rhythm and timing.

Now I guess by now some of you would be wondering, “Why haven’t you mentioned anything about the NOS and OS modes?” Well… to be frank, every time I thought I could hear a difference between the two, five times out of 10 I was proven wrong with a simple blind A-B test. I thought it sounded a tinge more analogue and smoother on the OS mode, but the NOS mode seemed just as good. Perhaps would be possible to discern using something along the lines of a Susvara or HE1000se.

THE LAST WORD
The Hifiman EF400 is a perfect contender within its price bracket, ready to take on any competition. Though its footprint might be on the larger side for a desktop unit – as opposed to a Schiit Magni/Modi or iFi ZEN DAC/CAN stack, rest assured once you install it on your desktop, it will stay for a long time.

At first I thought the features weren’t enough to meet the asking price, especially judging by HIFIMAN’s history with the build quality of its headphones. Once I listened to the unit, I was sold on its engaging and dynamic nature. The only question that remains – will it endure several years of constant use? We’ll just have to wait to find out.