M2Tech Young – the next level 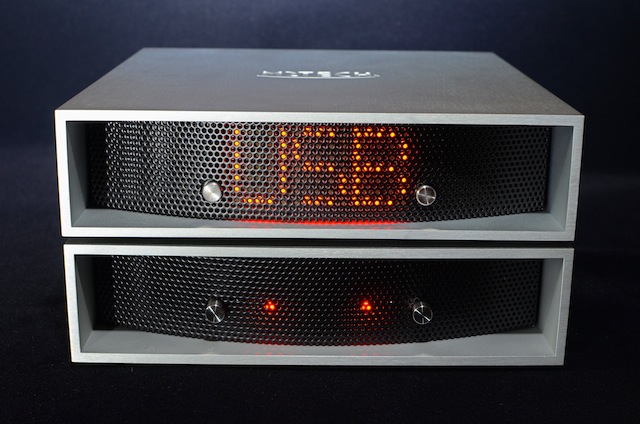 First impressions: With the plethora of DACs out there now boasting computer audio capability, there’s little to distinguish one from the another. However, prices rise dramatically and choices thin out as you go up the bit-rate compatibility ladder. At the extreme end, there are hardly any capable of accepting 32-bit/384kHz signals, but most certainly none as affordable as M2Tech’s Young DAC.

A burning question that arises is, if there is any real need for a 32/384 DAC. To my knowledge, there are no such commercially-available music files available, so this is future-proofing done to an extreme degree.

The Young, along with its optional Palmer power supply, share a similar brushed aluminium casing, with a black latticed metal grille as the front panel. Build quality is decent, but it is obvious that the chassis is made for function rather than form. A dot matrix display hides under the Young’s front panel – this indicates the selected source when the button is pressed, and defaults to and displays the incoming bit-rate thereafter.

Setting up the Young to work in my system went by without any problems whatsoever. All necessary drivers (as well as manuals) can be downloaded from the manufacturer’s website and  covers  both Windows (XP onwards) and Mac operating systems.

M2Tech recommends the Young be used in Kernel Streaming mode in a Windows environment – the links for downloading this function depends on the software player used, and all can be found in the user manual and website. Mac users are also given a complimentary download of the highly-rated Amarra software. This version is limited to 24/96 files only.

Marco Manunta, CTO at M2Tech, informed me that the USB input is asynchronous, based on its hiFace technology. For those unaware of it, the hiFace is a device that goes into the computer’s USB socket and pushes out a SPDIF digital signal. On many USB DACs, this is poorly implemented. Oversampling is done by a customised field-programmable gate array, which then passes on the signal to a Texas Instruments PCM1795 chip. The output stage is class A-biased, which puts out 2.65Vrms. The Young has only a single stereo pair of RCA analogue outputs but an abundance of digital inputs, as listed above.

The Young requires a supply voltage of 15-18V DC (wall-wart supplied). The Palmer power supply is an upgrade option which is actually a Li-Po battery pack capable of up to 12 hours of operation. Two outputs are supplied, which makes the Palmer capable of powering the Young and another product simultaneously.

Performance: I’ve had the opportunity to sample a number of USB DACs in the past, but none of them really got me going. What put me off most was the digital harshness that was inherently present. I can tolerate some of it, but this has to be offset by a large degree of musicality. The resident diyparadise Monica 3 does this, and I was beginning to think there weren’t any affordable DACs that could match up to a DAC based on the legacy Philips TDA1545A chip – until now.

Immediately apparent was the increase in detail and treble information over the Monica 3 that was coming through, yet the Young did this without that digital glare I am averse to. I was hearing a very organic nature to the sound – analogue-like if you will – delivered with precision and drive.

Tonally, the Young was very neutral, treble was nicely extended, without being strident and its midband had loads of presence. Bass performance was excellent, the low frequencies going down low and with good drive.

It also delivered dynamics in droves, while instruments and vocals were clearly defined and delineated, spread out in a gorgeous soundstage that is both wide and deep.

With the Palmer in place of the wall wart, the noise floor dropped dramatically, with greater definition and weight to the bass. Overall, there was better resolution and added air to the acoustic.

The good: M2Tech has made setup easy by posting all necessary drivers, manuals and a FAQ on it website. This indicates that the company has optimised the Young’s performance with operating systems, not leaving it to chance with standard plug-and-play modes (Windows, in particular).

Once going, there’s little else that gets in the way of the music. Even standard 16/44 files sounded better than I’d ever heard them before in my system. It even showed up the limitations of my Pink Floyd’s Wish You Were Here LP – I later found out it was an Australian pressing, something I had never bothered to check before the Young came along.

The ungood: Some high-enders will put off by the lack of balanced XLR outputs. I also found some the source selector push-buttons a little unresponsive.

Final verdict: To my ears, M2Tech has come up with a winner here. It has managed to combine both excellent performance and compatibility with the latest (future, even?) high-resolution digital formats. To be able to sell it at such an affordable price is a superb accomplishment.

The Palmer power supply is not cheap – then again, there are some power cords that will cost similar money, but none will provide the quantum of improvement afforded by the Young DAC.

This combo resides firmly in the realm of high-end, and one you have to hear if you want to bring your digital playback to the next level.