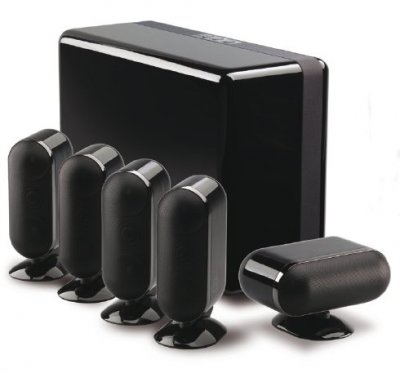 First impressions: That the complete 5.1 speaker system was packed into a single box made for back-breaking work … getting the whole thing from my car and into the house without dropping the box was a feat! Once I had extracted the speaker units and sub-woofer, I marvelled at the design. The black gloss finish spoke well of Q Acoustics’ control over quality. And certainly, no argument about the high wife-acceptance factor.

Setting up entailed the usual connection chores – I found the novel speaker terminals to be fiddly but ultimately effective – bare-wire is the way to go with the satellites units of the 7000 Cinema package.

Sonically, I was quickly made aware that the Q7000 was no pushover despite the diminutive size – it had presence and a good deal of authority.

Specs: Each of the five satellites uses two 75mm long-throw bass drivers and a 25mm frequency ring radiator tweeter. They have a frequency response of 95Hz to 20kHz, nominal impedance of six ohms and sensitivity of 85dB. Power handling is quoted at 15-100 watts. The centre channel, although packed into a similar housing as the left/right/surround units, is aligned horizontally. All units come with table-top mounts – they can be angled to your requirements and also affixed on the wall (brackets are optional).

The active sub has a 250mm (10-inch) long-throw woofer, with a 150W RMS amp on board. It takes care of the 30-200Hz spectrum and is housed in a rectangular casing, which in all weighs a substantial 18kg and measured 370 x 510 x 215mm (h/w/d). Again, I found it to be a unique in its design approach – the rear panel has to be unscrewed to connect the power cord and interconnect, after which it can be covered up again. An Allan key is also provided to remove the back. The usual dial-in values – crossover point, sensitivity and phase – are via flush-mounted rotary controls on the top panel.

All the enclosures are made of MDF, finished in a high gloss and available in black or white. The terminals on the satellites are spring-loaded, designed to ensure the speaker wires are locked in place. Performance: Q Acoustics is a relatively new company, so what’s amazing are the accolades it has received since it was formed … audiophiles will recall some fine bookshelf designs in the past that demanded attention, even if the finish back then was a tad iffy.

The 7000 system pulled no punches, whether I was playing the source in stereo mode – just music – or driving it with explosive movie and concert soundtracks. There was an air of refinement in the overall sound, a well-rounded and tonally even presentation that put it head and shoulders over a number of other 5.1 speaker systems I’ve heard over years. Nothing crude here, thanks perhaps to the hi-fi pedigree.

Especially impressive was how good some of the CDs I inserted in the digital player sounded via the 2.1 configuration of my Pioneer AV amp – certainly, it gave me reason to believe that one could build a music-only system in a small room in this mode and be rewarded with great enjoyment over the years.

Going loud presented no issues – in fact, I had to push the speakers harder than my resident ones, and there was nothing to suggested that the 7000 was struggling, even with dynamic movie tracks. The bass was extremely effective, with little suggestion of hardness. In fact, seen from a purely hi-fi perspective, this is a very musical system. The terms smooth and well controlled come to mind.

I also found the centre-channel unit to sound very natural and bigger than its physical limits – so well crafted was its delivery, I sometimes forgot it was there in place!

The good: The 7000 will serve the needs of the discerning listener better than it will the slam-bang crowd – it goes about its job sans fuss, and shows itself to be competent in a variety of situations.

If you’re on a regular diet of music and concerts, there’s something very pleasant and majestic about these speakers and their sub. Gracefully dynamic and adept with spatial information, the 7000 will go through long hours without tripping up … just make sure your amp is of good quality, because this system can tell! And that sub is impressive in a number of ways, from its subtle impact to the depth of detail it carries.

The ungood: As with many hi-fi centric manufacturers, the delivery is tuned for finesse, detail and elegant impact, so those who demand that their AV speaker system must play as if there were no tomorrow won’t approve.

I found the speakers terminals a bit difficult to get to, plus, all that gloss is a magic magnet for sticky fingers.

Final verdict: This isn’t a cheap system, and some may feel more impact can be had lower down the price tree, if all one wanted to play were movies.

Yet, those for whom living space is a premium and a compact high-quality system is the requirement, for both AV and music, the 7000 is undoubtedly the sensible option … and the looks certainly make it a winner.

It could have been more competitively priced, though …