MOST subjects in hi-fi are debatable but there’s little arguing about this – Wilson Audio makes some of the most desirable speakers in the world, and not just because of their sonic performance. They are, in a sense, bespoke because customers can pick from a range of colours (or specify) when it comes to finish – of the enclosure, grille and hardware.

Also, like most high-end companies, new products are carefully spaced out over the years, rather than months. Wilson Audio speakers are legendary for their accuracy, speed and bass performance … and as owners will tell you, good for a lifetime of exhilarating musical pleasure.

One of the big buzzes expected at the upcoming Rocky Mountain Audio Fest 2012 in Denver, Colorado, will be Wilson Audio’s launch of its new “mid-level” floorstanding speakers – the Alexia

Priced at US$48,500, the Alexia certainly isn’t the company’s most expensive model – there are the flagship Alexandria XLF, Alexandria 2 and Maxx 3 ahead of it in the price ladder. The Alexia insinuates itself just above the Sasha, sharing almost similarly compact dimensions compared with the behemoths up in the range. 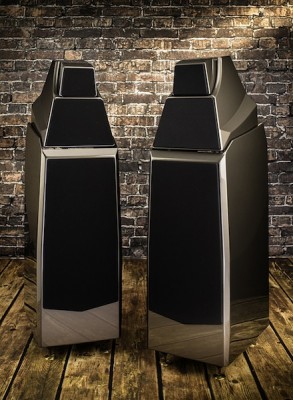 The brief of the Alexia was to meld the time-domain accuracy of the XLF within the design template of the Sasha, with sonic results to rival the larger models. This eventually called for splitting the Sasha’s single midrange/tweeter enclosure into two separately adjustable modules. It took more than a year to finally settle on the Alexia’s final form and function, we’re told.

The Wilson Audio literature best explains the separation of the midrange and tweeter modules:

Alexia’s upper two modules are capable of very minute adjustments in the time-domain. Aspherical group delay technology, first implemented in Wilson’s flagship Alexandria, has been incorporated into the Alexia design. To realise the complexities of both driver-axis tuning and time alignment, the midrange/tweeter assembly uses a combination of a captive spike and three additional spikes of different lengths, which in turn rest on a 10-step alignment block borrowed from the Maxx.

The entire two-module assembly also moves fore-to-aft, along eight positions. The tweeter is separately adjustable in its relationship to the midrange module and, in turn, to the entire loudspeaker. A complex milled aluminium cross member is mounted above the tweeter module. It is a physical extension of the midrange module, bridging the open area along its upper section. 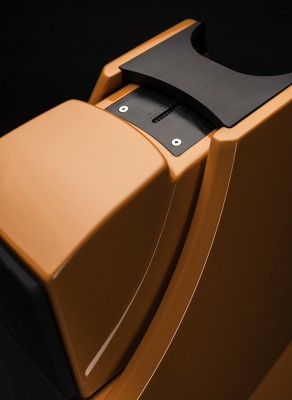 By way of comparison, the Sasha features a total of four spikes, which serve to rotate the single upper module to four separate positions. In contrast, both Alexia’s tweeter and midrange modules are adjustable independently, both moving front-to-back, accounting for the time alignment of each driver.

Additionally, aspherical group delay technology allows the modules to be rotated for optimum axis performance. All of which means Alexia can be adjusted in hundreds of different combinations to accurately accommodate a nearly limitless variety of listening configurations.

The exact location of both upper modules is based on the specific geometry of each room and the location of the listener. Each module’s position is precisely specified in the provided owner’s manual. The Alexia’s measured time-domain accuracy surpasses all previous designs with the exception of the remarkable Alexandria XLF, which it equals. 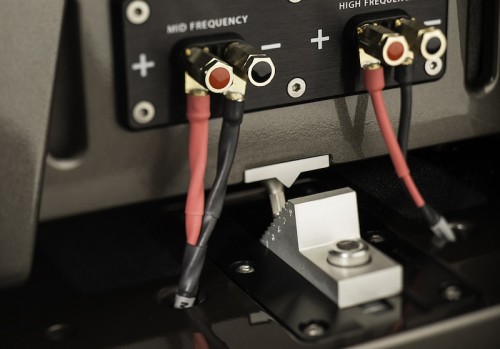 New paper pulp cone woofers were also specifically developed for the Alexia, taking into account the speed, tunefulness and agility of the Sasha, along with the weight and authority of the bigger models. The result – two new eight- and 10-inch drivers. The bass cabinet also has 18% more volume than the Sasha’s unit.

The cellulose fibre/carbon composite midrange driver used in the Alexandria XLF also finds its way to the Alexia, along with a new Convergent Synergy™ Tweeter, which has a silk-based fabric dome, and with response up to 33kHz.

The first shipments of the Alexia are scheduled for mid-November. Check with your Wilson Audio dealer for details. 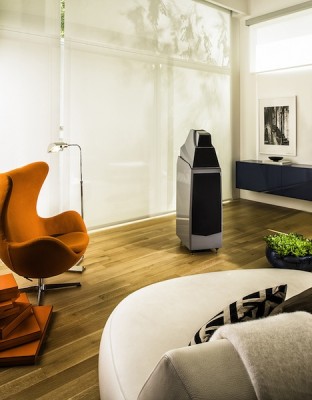