THERE’S no doubting that hi-fi companies can find increased exposure and stature when they partner with an exotic brand of product better known to the general public than little bits of electronics.

Bowers & Wilkins, the UK high-end audio specialist renowned for its speakers, and more recently, lifestyle electronics, has just announced a brand partnership with Maserati, famed Italian maker of sporty cars. And in the pipeline is a high-performance car audio system that will be exclusive to all Maserati cars from 2013.

“If you look at the values the companies have in common, the partnership makes perfect sense,” said Wester.

“Both Maserati and Bowers & Wilkins have a proud heritage of traditional craftsmanship and engineering excellence. Both have a real commitment to innovation. And both continue to set benchmarks for performance and design in our industries.

“Maserati has always attracted discerning customers who appreciate understated refinement and genuine performance – and the same can be said for Bowers & Wilkins.” 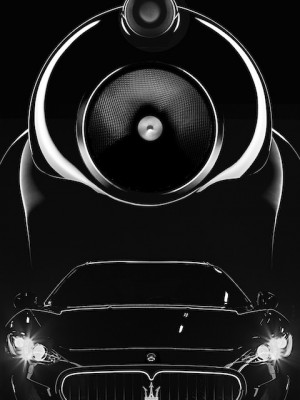 Specific details of what is touted to be a game-changing car audio system have yet to be released but Huizing promises it will be worth waiting for … if you’re a potential Maserati owner, that is.

“I’m confident we’ve come up with something very special. By working closely with Maserati engineers, we’ve designed a system perfectly adapted to the unique challenges of the car environment, and one which will deliver great sound and transform the driving experience.”

To drum up excitement among car audio enthusiasts who are planning to buy a Maserati soon (and no doubt, there are many), both companies are jointly organising a number of brand activities. These include a microsite, videos and a series of events around the world. The pride of place amongst these is the Seven Notes project.

As the motoring enthusiasts among you know, Maserati engines produce seven distinct notes (in the key of what, we’ve yet to ascertain). These notes have been used to create exclusive atmospheric recordings, composed and recorded by musician and producer Howie B (U2, Björk) at Abbey Road Studios in London. They are available at no cost and in in FLAC (24-bit audio offering Studio Master quality) or Apple Lossless (16-bit) formats … go to the site for a listen.

Now, excuse us while we make an appointment to take a Quattroporte for a spin.