ARDENT Krell disciples may have long rued the lack of a moving platform for their favourite high-end brand but they can rejoice now. Krell Industries has just announced that it will offer its first ever premier audio system for automobiles.

There’s a catch though – the Krell system is a collaborative venture just for the 2014 Acura RLX (in case you’re not familiar with the name, it’s Honda’s luxury division).

“We’ve been in business for more than 30 years; we’re well known for making the highest-performance audio products for the home and we are excited to bring our sound quality to the automotive environment,” Krell Industries president Bill McKiegan said in a statement.

“Every aspect of the system’s design was dissected and optimised to achieve a system that is sonically breathtaking,” he added.

Each component of the Krell-Acura system has been designed to surpass any car audio solution on the market today, claims the Krell. To ensure sufficient power and range to meet the demanding needs of the automotive environment, Acura embraced Krell’s philosophy of musical detail, three-dimensional sound presentation and extreme volume capability. 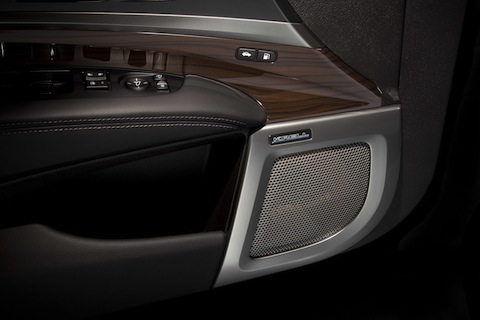 The system’s tweeters are made of lightweight magnesium cones for enhanced musical detail and extended highs, sans any grain. The speaker grilles are made of metal, instead of plastic, for durability and reduced vibrations.

Six mid-bass drivers made from Zylon – the strongest super fibre in existence – voice a wide range of the system’s frequencies. Zylon is very rigid and responds quickly, ensuring superior handling of transients and dynamics; it is claimed to be faster than the polypropylene cones used in the majority of car audio speakers today. More speed is never a bad thing, we say …

Car enthusiasts and audio lovers can get a sampler of the Krell-Acura system at the Los Angeles Auto Show (Nov 28-Dec 2), being held at the LA Convention Center.

Krell is tight-lipped over any possible plans to expand its car audio range, while prices for Acura trim levels will be announced next year, we’re told.