First impressions: Tube amplifiers carry with them an aura of mystic and audio romance, but those who deride their performance in favour of cheaper and more powerful solid-state amplification will always occupy one side of the divide, with the tube lovers hanging on proudly to their side of the river bank. One might suspect that the middle path would be the best, but that of course is common sense speaking, and with this hobby, such rationality often gets sidelined in favour of emotions. But there is something about a set of glowing valves, when the lights are turned down and the music starts to flow….

Rogue Audio from the USA has at once come up with a product that might just appeal to these broadly differing camps of audiophiles. The Cronus Magnum integrated tube amplifier is an upgraded version of the much-lauded entry-level Cronus integrated and has some degree of reputation preceding it. Not least, the entire product is made in the USA as is everything else in the Rogue Audio line up.

Getting this puppy up to the 21st floor of my apartment building was no easy task, and by the time un-boxing was completed, it became clear that this integrated is no mere pushover. It’s heavy. The transformers are compactly situated to the rear of the rectangular footprint, resulting in a significant weight bias, and its 30kg overall heft means that placement and manoeuvering need to be carried out with care. Get someone to help you but if you’re feeling really confident and ready for a strenuous sustained workout, it is possible to set it up on your own. For the price, one is getting a lot of amplifier. 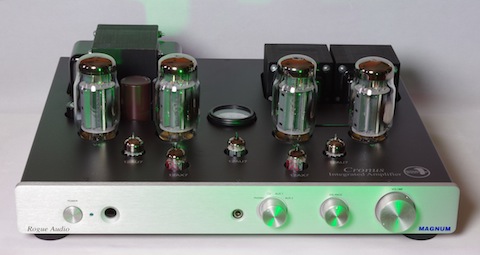 Specs: The amplifier is completely utilitarian in outlook. A power switch, a HAL-like blue LED power indicator, a headphone socket and remote sensor occupy the left-to-centre spread of the fascia, with – surprise, surprise – a balance control following the input selector switch.

This Magnum version of the Cronus punches out a hefty 90 watts per channel through four- or eight-ohm taps accessible via opening up the top plate and switching some wires over. I left this well alone as my speakers work well with the default eight-ohm setting.

The Rogue Audio website states that the Magnum is shipped with KT-90 power tubes, but this example carries the new Tung Sol KT-120 – going by the designation, this should provide more power than the stated 90 watts. The signal tubes are a pair of 12AX7s and the driver tubes are a trio of 12AU7s, which ship already installed within the amplifier’s chassis.

It should be noted that the phono input of the amplifier is a true moving magnet input with 36dB gain before the pre-amplifier stage. The tubes are all exposed, with the signal tubes being semi-recessed into the top plate – a cover is available as an optional extra to be used when the amp is not in operation. Input and output sockets are hefty and well made, allowing for the full range of terminations commonly used.

The volume knob is a no-nonsense type and turns with positive feedback. Nothing wrong with simplicity – if it’s done right, it begets elegance.

The power tubes are packed separately and only need to be inserted into their proper sockets and biased. Yes, no auto-bias here! But it shouldn’t put off the non-technical segment of the market who have put off getting into tubes for this reason. The instructions are clearly printed, and the correct tool is provided in a convenient holder right on top of the amp, behind the power supply transformer. Even I could do it! Within an hour of getting it leashed up, warmed up, biased and with a fresh T-shirt change, along with a glass of cool iced tea, music was flowing into the room. 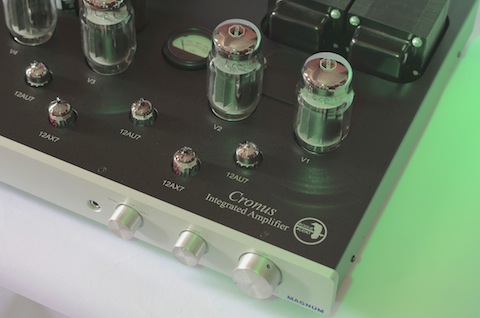 Performance: The early impressions when playing a familiar selection of records through the Cronus Magnum were of speed, dynamics and a glowing mid-range. The bass was big and wholesome, showing a degree of control lacking in some similarly specified solid-state integrated amps.

Dire Straits’ Money For Nothing thumped through with musicality and firm attack, letting Knopfler’s finger-plucked guitar work show some delicacy and definition, while Keb Mo’ sounded rich and soaring, the midrange and mid highs being imbued with a slight coat of honey. This quality carried over to female voices, especially in the soul genre. Joss Stone’s Soul Sessions should be warm and throbbing, and those big KT-120’s round off these qualities by bringing Ms Stone’s voice to the forefront of proceedings while layering the textures of the music over an apparently wide physical spread. The depth of bass of these tubes are certainly low, yet controlled, as it should be with the amount of displacement on call.

In the interest of pushing boundaries, more complex material was introduced into the mix, such as the 180gm reissue of Metallica’s Black album. The Cronus Magnum just chewed it up and spat it out with what might be mistaken for nonchalance but, in reality, was just a very musical interpretation that made one simply want to headbang and mosh along with the most powerful (working) band in the world. It was simply able to make sense of the furious drumming and locomotive-type bass lines while at the same time defining the driving force of the guitars with just the right amount of midrange magic.

With a digital source in play, namely my vintage wooden faced Holfi Xara CD player, things were positively sparkling. The most noticeable characteristic of the Cronus Magnum when playing CDs is the smoothening of the highs, almost eliminating that glaring graininess that can come with shiny disc music.

Granted there is no high-end DAC in place in my system, nor would my humble Xara accommodate one, but the Cronus made me imagine just what I might be missing out on where CD playback is concerned. Ahmad Jamal’s latest album, Blue Moon, was definitely enhanced in terms of defining the phrasing and voicing of the master’s Steinway, while James Camack on double bass seemingly rose up from the joyous cacophony of swirling percussion.

However, in terms of overall resolution, the Cronus falls behind similarly rated solid-state amplifiers such as the 75-watt Exposure 2010s2 integrated, or the 110-watt Odyssey Khartago power amp. This was evident across sources. The quality of each individual nuance could be said to be masked by characteristic tube harmonics. By this, I mean that while sounding tonally rich, that fine leading edge to notes was just lacking that little bit. In the balance of things, the Cronus Magnum ranks high in musicality, making it easy to want to play yet another record or CD, unfazed by genre. 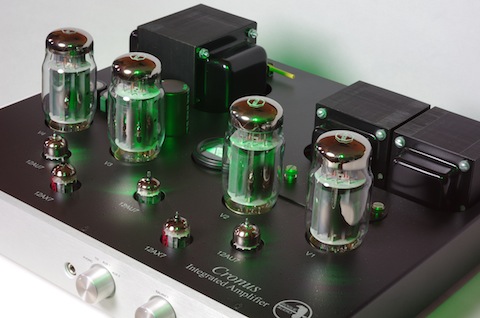 The good: This integrated amplifier makes for a great introduction to tube gear due to its no-fuss set up. The bias remained steady for the few weeks the amplifier was in my service. Run-in was short and sweet, and sonically, it remained consistent throughout, once locked in.

Along with its speed and low-frequency extension, the sweetness of the mids and highs were brought forward by that right amount to induce better immersion into the music. Best of all, the Cronus made me want to keep playing music through my system.

The ungood: For some, this is definitely not a sonically neutral product. While the colouration of sound may be pleasurable and desirable to some, many an audiophile would be looking for higher resolution and a more balanced frequency response.

The supplied remote control seems like an afterthought, with only two buttons for lowering and raising the volume, a job it does not too precisely. But it’s rarely a hassle to get up close to dial things up or switch inputs as one gets to enjoy some eye candy in the form of those glowing KT-120s.

In addition, if you need to get equipment up flights of stairs or manoeuvre it subtly into where it should go, do be careful with the weight of this hard-hitting beast.

Final verdict: This is a piece of equipment for the music lover, someone who wants to just get into the sound of the music, while letting the gear do what it’s got to do, with plenty of guts – what it lacks in resolution, it makes up for in drive and enjoyment. Plus, it’s a tube amplifier, with simple yet appealing looks, and would be an impressive sight on any equipment rack or shelf! 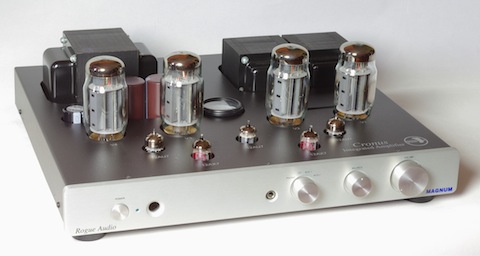 Pein Lee is a freelance photojournalist with a keen interest in all things musical. When not lurking around music festivals and concerts, or on assignment, he’s constantly searching for LPs and wrestling with getting the most out of his two-channel sound system. Pein believes in maintaining a sanity level when it comes to buying and using audio equipment, and taking a holistic approach to the hi-fi hobby.