The tale of Bryston’s Model T

THERE’S a precedent here – manufacturers of acclaimed amplifiers, after years of fine-tuning their craft, have an epiphany. That no loudspeaker out there, at least none that don’t cost the earth, is capable of faithfully reproducing the best their amps have to offer. Solution – make your own line of speakers, as the likes of Krell, McIntosh and others have done.

And now, Canada’s Bryston Audio joins the club with its Model T floorstander, with the promise of a full surround system to come.

Rather than go it alone, Bryston opted to collaborate with another Canadian company, Axiom Audio, which is a speaker manufacturer. A sensible route, certainly, as opposed to creating a design from ground up, which is always a costly affair.

Bryston’s president Brian Russell was in Kuala Lumpur recently and allowed us the opportunity of asking him to explain the venture, and query about other company offerings. 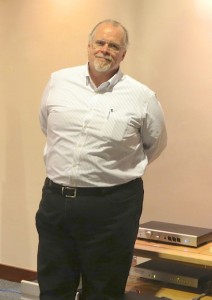 Why Axiom and how extensive was its role in the Model T’s creation?

“It started out as a personal project for (Bryston vice-president) James Tanner (which is why the first model is called Model T, for Tanner). He knew exactly what he wanted in a pair of loudspeakers. After a year or so, it evolved into a Bryston project.

“James asked several speaker companies to work with him on this design but Axiom was the only one that responded positively to what he wanted. Although, initially, Axiom also hesitated as they are more focused on smaller standmounts and mini floorstanders, and not into designing huge floorstanders. That was the first challenge for them.

“They helped in the design stage by providing feedback to James’ idea of how a speaker should sound. However, manufacturing and QAQC (quality assurance/quality control) was completely done by Bryston and the finished product is a Bryston speaker,” Russell assures potential Model T owners who may be wondering if this is merely a badged product.

Russell is quick to add that, sonically, the Model T is also very different from Axiom’s own line of speakers.

“As Axiom is more focused on smaller speakers, their designs are not catered to cover a whole spectrum of audio and bigger venues. The Model T is designed to provide sheer dynamics, speed and higher power handling.”

The drivers, though, are made by Axiom.

“One of the criteria for the Model T design was to produce the best sound quality with exceptionally good value. The finished product was carefully selected to make it affordable without compromising sound and build quality – a very good quality speaker at a very affordable price,” says Russell.

Do the multiple drivers mean the Model T can be bi- or tri-amped?

“It allows for tri-amping, the active version. The crossovers are designed such that there is a stepping point from passive to fully active system. It is basically an upgradeable speaker.”

The decision to go with Axiom, one surmises, was also due to proximity. Over the years, Bryston has also worked with UK speaker manufacturer PMC to realise a better synergised sound between source, amplification and speakers, especially with PMC’s Advance Transmision Line technology. Is there any conflict of interest?

“We still have synergy with PMC, we will still work with them. Yes, there is a small conflict of interest and concern was raised by PMC over the market in the UK. We are not sure of how to deal with the UK market at the moment. So, currently, Bryston will sell the speakers only in North America and to overseas locations, and Malaysia is one of them. We look forward to hear how audiophiles here react to our first speaker design,” Russell says

The passive option retails at US$6,450 per pair, the active at US$7,450. Bryston is offering a five-year warranty, although Russell says this could be doubled in future.

There’s no denying that looks sell, even in the hi-fi business, but the Model T is fairly conventional, so how certain is Bryston that this approach will find favour in Asian markets?

“Believe it or not, in the recent Toronto HiFi show where these speakers were showcased, there were people who would not even listen to the speakers when they saw that we had two tweeters in the design. They literally just left the venue. But it was the WAF (Wife Acceptance Factor) that pulled back the listeners – they were being told by their wives that these these speakers not only sounded good, but also looked good!”

We know that Bryston is also working with Axiom for a complete range of AV speakers, including a subwoofer. What else is in store, if we’re looking at the company’s core business of electronics?

“The new BDP-2 (digital player) will be launched very soon, which will have an option of installing an internal SATA drive. NAS playability is also another key feature. This is not meant to replace BDP-1 and both of the models will be produced concurrently.

“Also, the BDP-2 will be accompanied by the BDA-2 DAC on which one new feature is the asynchronous USB connection that can accept 24-bit/192kHz signal from laptops. Again, this is not to replace BDA-1 DAC as both will be in production concurrently.

“We’ve received some feedback/requests on the colour of the LEDs used on our products – green on some models, blue on others. We’re now offering buyers to specify which colour they want when they order their unit.”