Primare I22 – diamond in the rough

First impressions: We’ve seen how specs are presented in such a way as to sell wares, giving an impression of a product that in reality may be a little less than how it is portrayed.

Judging on features and specs alone, the Primare I22 is pretty understated off the bat, although those who are quick to dismiss it based on first impressions may find themselves backtracking to re-evaluate it.

Proof of this Scandinavian pudding turned out to be somewhat of a mixed bag, though. The Swedish manufacturer underlines its offering with a veritable bag of upgradeable goodies, promising a measure of future-proofing. Sonically, it may seem a touch aloof but the I22 takes its time to reveal its inherent nature, given the right circumstances. 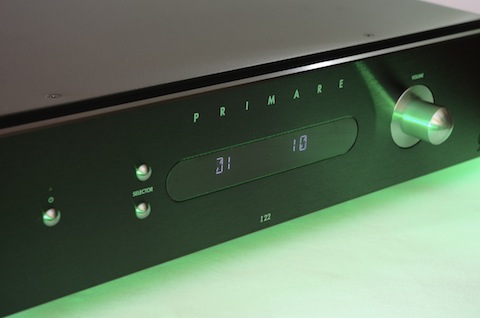 Essentially running in Class D, the UFPD premise allows for consistency across the entire audio bandwidth by being the great equaliser, the feature essentially adjusting gain feedback to maintain performance regardless of load variations. This in theory reduces or eliminates the tendency of Class D devices to come across sounding brittle and harsh. Interesting idea …

I’ve always regarded Scandinavian products as typifying understatement. Three buttons and a volume knob flanking the display panel are about as much as you get on the I22’s real estate out front. This is probably all that one needs. A power on/off button and two vertical input/source selectors break the smooth monotony of its fascia, the central display screen being the focal point outlining volume level and input in use.

The I22 otherwise pretty much conforms to a fairly common standard. Pumping out 80 watts per channel, the 10kg unit is available in either titanium or black finish (the review sample’s look was decidedly nondescript, perhaps a confirmation of the Scandinavian design restraint).

The user experience doesn’t particularly break new ground – the four line-level inputs are par for the course and offer renaming facilities. Also provided are two sets of outputs for recording and preamp duties, along with a set of single-wired speaker outputs.

Taking things up a notch, the I22 will accommodate an optional DAC board based on the 24/192-capable Burr Brown PCM 1792, and which supports inputs via optical/SPDIF and the all-important, all-relevant USB.  Rounding up the features list, the supplied remote control is fairly intuitive in usage, although I suspect its looks will not exactly  endear it to all users. 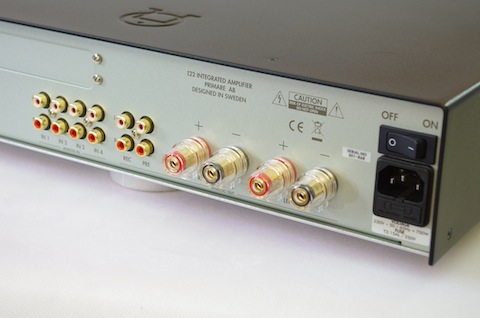 Performance: I felt as if I was on to a good thing, having initially connected the I22 into my set-up to substitute my own Exposure 3010S2. The Primare settled into a steady rhythm quite easily, without much fuss or drama. The accompanying literature suggested a break-in period of approximately 24 hours; the amplifier will then take another half an hour upon switching on to stabilise its performance.

My own experience had the amplifier initially sounding a little dark at the outset, with an appreciable opening up after a rather lengthy two weeks or so. That the I22 runs cool is a given considering its Class-D bias, and can only be a good thing. I found no unwarranted foibles on the I22 over the review duration.

Everything was pretty much in order and the opening up sonically was more gradual than sudden, noticeable in how imagery and staging grew wider over the boundaries I was accustomed to.

Where I thought the I22 hit the nail squarely on the head was its even-handedness across a wide spectrum of programme material and genres. Once past its initial running-in, the amp turned in a pretty mature performance, combining that delightful deftness and muscularity one would probably associate with more exotic designs.

I also noted that its high-to-low frequency integration sounded quite spot on, with no seemingly bloated emphasis on any particular spectrum. The amp’s grip over the low-end notes is worth mentioning, and while it didn’t go as deep and plumbed the depths, the I22 returned a well-judged mix of fleet-footedness and weight. This provided a nice anchor for it to chug along to, in concert with the expansive soundstage it was capable of conjuring.

The sympathetic approach to everything, however, proved to be the I22’s undoing. The restraint you see in the inherent design feels carried over towards the voicing of its tonality. While essentially neutral-ish, the I22 can come across feeling rather reticent, dragging its feet almost with anything offering a bit more groove and dynamics over other genres.

The good: What I particularly liked about the I22 was its ability to create believable sonic images – very close to the kind of 3D stereo palpability you can reach out to and touch. Such was the depth the I22 was capable of portraying, easily matching most other amplifiers within its price range in that respect, on occasions possibly even going one better.

It would seem that the rationale behind UFPD delivered the goods – its un-fussiness in music-making was given a good dose of control and extended to frequency extremes.

The ungood: The word that I struggled to put to print trying to sum up the I22 is perhaps excitement; or perhaps the lack of. There are things that the I22 does pretty well, and when it does, the experience can indeed be pretty special.

However, instances where the corresponding sense of energy and drive from the programme material feels as if it is not being communicated as much as I would have liked can become quite apparent. A convenient comparison with my 3010S2 highlighted this sufficiently enough for me to make a note of it.

I found myself wondering whether what I was hearing was just the I22 being simply forthright, and the sense of reticence merely a lack of coloration. Turning the volume wick up did a bit to add to the sense of drive and vitality – to its credit, the amplifier kept its composure and never once turned shouty.

This brings me to the conclusion that low-level playing isn’t exactly the Primare’s forte and does sap music a bit of its vigor. This can potentially be a deal-breaker for some but if you’re blessed with understanding neighbours, it could well be a minor gripe. 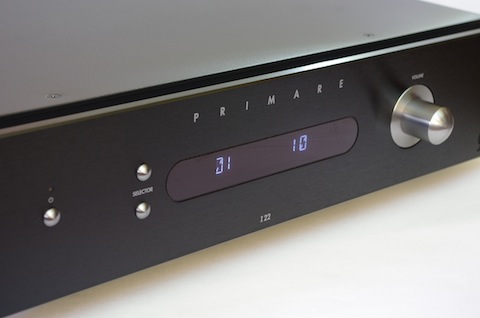 Final verdict: The end of the year is usually when people tend to take off, unwind a little, and perhaps take their family away for some deserved R&R. These are times when most of us also take stock of the year that was and look forward to bigger and better things for the coming year.

It would seem that my review of the I22 comes across as being rather unfavorable. Far from it really – despite the shaky initial start, I was quite impressed with what was on offer from such a minimalist package.

That said, my own experiences with the amplifier suggests that the I22 could have communicated more, so within the context of system matching, potential punters might want to take longer to evaluate its suitability. I believe given the right set of circumstances, the I22 is well-capable of delivering the goods.

So take a good hard listen and reflect – the inherent properties of the Primare I22 could well make it a diamond in the rough.