On this week – CES and THE Show

JANUARY is traditionally an exciting month for the hi-fi and home theatre industries and this year’s no different.

On a broader scale, there is the International Consumer Electronics Show (known as the Winter CES in the past), a traditional trade event that plays host to thousands of exhibitors at different venues. The theme, obviously, is consumer electronics, and it’s the occasion for new technologies and products to be launched – the audio segment has its own platform here. 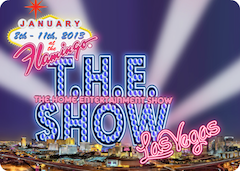 Simultaneously, there’s also The Home Entertainment Show (THE Show), a more recent event launched in 1998 which is more specialist in nature and draws many of the major high-end audio and home theatre industry players.

Incidentally, the city in which both shows are being held is Las Vegas, and if you haven’t booked accommodations for the Jan 8-11 duration of 2013 International CES, forget getting a seat. You could, however, check in a week after both the shows for the other entertaining event – AVN. Alright, the Adult Video News conference. However, that’s not what we want to draw your attention to!

Come Tuesday, hi-fi buffs visiting Vegas should check out The Venetian, the Las Vegas Hilton and the Las Vegas Convention Center, where the audio exhibitors will be located. The link to 2013 International CES should give you all the information you need on the event.

THE Show, which is less trade-oriented, will be held at the Flamingo Las Vegas, and purist audiophiles may find this more to their tastes, since it draws a more exclusive category of visitor.

We’ll update you on a number of new products that make their debut at either show in the coming weeks … although some have already been announced here earlier.

For those there, have fun … and keep focused on hi-fi!