THIS one slipped under our radar initially but we managed to catch it – a new Clearaudio turntable, the Performance DC, which has been available for a few weeks now.

The Performance DC a progression of the original Performance, the German company’s most advanced turntable/tonearm/cartridge package which was followed by the “SE” (Second Edition) version. “DC” may well stand for “Definitive Collection” …

On the subject of speed, the Performance DC also offers 78rpm, apart from the standard 33 and 45, one more than its predecessor. Speed changed is electronic and effected at the touch of a button. 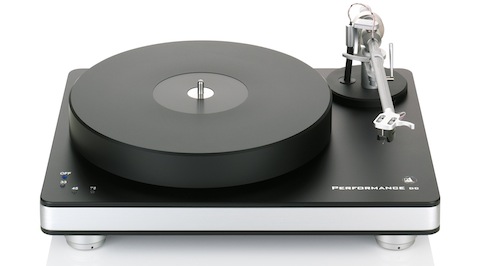 There’s also an upgraded platter, which is a precision-machined 40mm-thick black POM (Polyoxymethylene, a thermoplastic) disc that purportedly has superior acoustic properties.

The now-familiar ceramic magnetic bearing is part of the design, resulting in reduced friction, wear and noise as there is no point of load.

The chassis is a sandwich of aluminium and high-density fibreboard, and finished in black or silver.

The Performance DC package comes with the Clarify carbon tonearm and Virtuoso V2 MM cartridge. The turntable can also be purchased on its own, if you want to use a better ‘arm and stylus to further boost, er, performance.