LONG-serving disciples of Magneplanar speakers will insist that the best models from the company came out in the 1970s and 1980s. I, however, heard my first pair of Maggies only in the early 1990s and was hooked. Whatever your view, there’s no arguing these box-less planar magnetic/ribbon designs keep enticing new fans with every new generation of model.

My bottom line – for the same money, you won’t find a dynamic speaker that does the things the Maggies do. The life-sized presentation, staging and immediacy are hard to better … and the bass, often perceived as the weak area in ribbon-based designs, can surprise. The trick is to get the support system right. And this is the crux of the matter – the experience can be as frustrating as it is rewarding.

These are common allegations levelled at Magneplanar speakers:

1. They need a lot of power and are amp-fussy.

2. They have little or no bass.

5. The room is important.

Having lived with Magneplanar speakers – the SMG, MG1.6 and, currently, MG1.7 – for the most part of the past two decades and in two different rooms, and having used them with a range of amplifiers, I reckon I’m in a position to refute or affirm these urban legends. I even had a pair running in my AV system for a bit in the mid-1990s – I can’t recall the model, but they were slim, tall and went down only to 80Hz (anyone?). Worked beautifully as front speakers, with a passive subwoofer taking care of the bass. It was the only time I used a sub with a pair of Maggies!

1. If you’re going to play them constantly at high decibels, this would hold true. If you’re talking about big Maggies (like the MG20 series), I’m sure it’s a yes. Further down, in the midrange and budget ranges, they don’t make unreasonable power demands. What they appreciate are high-current amps, especially if you’re going to be playing them reasonably loud and for long. And the better the quality of the watts, the more rewarding the results. I had a 100-watt German amp shut down after half an hour of driving the 1.6 at moderate levels. My resident 110-watt Odyssey Audio Khartago Extreme mono blocs do long hours with the 1.7 with nary a hiccup.

Maggies present a nominal four-ohm load and the impedance varies more widely than with many dynamic speakers. The amp needs to be able to deliver the required amount of current if you want to extract optimum performance. A 10-watt SET isn’t the way to go, nor is a 200-watt solid-state amp that is a laggard in current reserves. I’ve extracted as impressive results with a Mesa Baron all-tube amp (only when a passive preamp was used) as I have with the brutish Krell KSA-300S. The older 1.6 was paired with a McIntosh MA402 power amp for a year, and delivered  inspiring results.

2. If you get everything working together, you can extract a surprising level of lows – without colouration – from a pair Maggies. I’ve had guys looking for a subwoofer in my room when the older 1.6s were playing! A bassist friend heard a Grand Funk Railroad track playing through them for the first time and exclaimed: “It’s sounds like the bass player is in this room!”

3. Once, this was true but those ribbon/quasi-ribbon/planar magnetic strips have been sturdier since the 1990s. My first pair of 1.6s moved house with me without any detrimental effects to the speakers. You need to be more careful about the MDF frame when you mount the panels on the provided the brackets, which act as supports. If the bracket gets knocked around while the panel is mounted, the MDF frame can be damaged – it happened to my older 1.6, but I got it repaired to my specs and the bass sounded even better! Time to market the mod, perhaps?

4. Yes. They have a narrow sweet spot but even casual listening can reveal how they excel at tone and timbre.

5. Yes. Or bass goes into hiding. I’ve been lucky with Maggies – both the rooms I’ve placed them in for long-term listening have shown synergy. Bad room, bad Maggies … 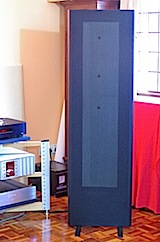 The last brings me to my first run in with the MG1.7 more than a year ago at a friend’s place. After having owned two pairs of 1.6 panels since the late 1990s, I thought it was time for a change. I felt I had extracted as much as I could from the latter pair, and I’m not the type to mess with crossovers and frames. The 1.7 piqued my curiosity, even if I was pretty satisfied with the 1.6.

The initial listening session left me horrified – there was no bass to speak of, and try as we did with positioning, different cables, and amp alternatives, the panels sounded off the mark with the lows.

Either the room was totally unfriendly to the Maggies or there was something wrong with the panels. I suspect a chest of drawers placed against the rear wall was one of the factors contributing to the lack of bass, along with the hall’s layout. We never did get to the root of this scientifically, though – he soon traded up to the bigger MG3.7 and I hear he’s enjoying them although I’ve yet to visit him since then.

The crux of this tale – another friend bought over those 1.7s and he loves them, says there are no issues with bass.

Anyway, a couple of months after my first run-in, I heard the 1.7 at the distributor’s showroom – this time, I certainly was more impressed, enough to place a deposit. As of now, the 1.7 has been in service for about 18 months – time enough for a long-term assessment.

Sujesh Pavithran has three rules about Magneplanar speakers – no subs, no pets and no kids in the same room.