The second time around

ONE of the interesting things I find about the hi-fi hobby is observing the various sub-cultures in audiophile-dom – for example, there are healthy volumes in the headphone-oriented listening niche, lots of vinyl-philes, obviously, then we’ve got the desktop-computer audio listening fraternity, the “solid state is for the vacuum-brained” bunch … and list goes on.

I’ve always been partial to vintage gear and have long skated on the fringes of joining the “old is gold” crowd. I say this because I’ve seriously pursued owning old gear only in the vinyl LP replay space – glancing over from my monitor, I can see my Garrard 401 sitting side-by-side with a Dual 701 and a Technics SL-10 on my gear rack. A Thorens TD124 with SME3012 is in the next room awaiting its new plinth. In a moment of craziness, I purchased a well-worn Pioneer PL1200 direct drive TT of circa-1974 vintage, a piece of gear I recall from my young penniless days.

I reminisce back to the time when, as an army kid, I’d stare at all the great gear which was in the electrical and home appliances section of the NAAFI outlet, while my mother and father were in the consumables section loading up on some superb quality Heinz canned baked beans and tomato ketchup, which would leave the likes of the same stuff produced today wanting. I swear that “Old Spice” hair-cream from the NAAFI store was so far superior to that found on the counters of the local stores that one would’ve thought they couldn’t possibly have come from the same company!

Recently, my Dad asked me to see if we could get a buyer for an old pair of Sansui SP300 loudspeakers which we had obtained when the owner thereof had passed. He was beginning to feel that these speakers, which are not insubstantial in size, were crowding him out of his hall … and he was absolutely right – there was the minor issue of a smaller, but by no means LS3/5A-like, pair of Sansui SP200s sitting right next to the 300s. Dad had owned the SP200s since before I was born and I had grown up listening to them.

A friend who got wind of this almost immediately came over in the hope of taking the unwanted oldie off my Dad, but as we all know, gear that we’ve owned always seems to sound best just when we’re about to part with it! We had to disappoint this friend, ultimately (I can only say sorry yet again, Gabriel). 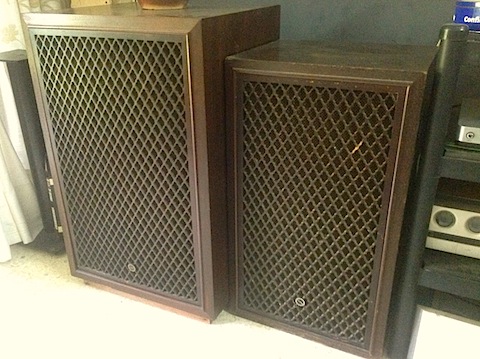 Okay, since we’ll be keeping these oldies, why not try to get the best from them, I thought? They never seemed to have been able to sound at their best since being acquired with the more modern gear that had partnered them (mid-1980s and early 1990s Rotel, Pioneer and Exposure integrated amps). I purchased an old Sansui QRX-6500 receiver on the advice of a friend ­– his view was that what these speakers needed was a suitable same-period amp.

Putting the whole vintage shebang together, both Dad and myself were rather surprised at the results which ensued. Okay, so there wasn’t much of a stereo image to speak of (the speakers were on the floor and against the wall, like how speakers of yesteryear were always positioned), and we used thin speaker cables from Ace Hardware, with interconnects of the “bundled-with” variety (though of decent quality). The sound could be described as coloured and there were clear tonal deviations from neutrality … but what a superb FM radio performance!

And then Roy Orbison started to sing This Magic Moment, and it all started to make sense. This is music-making the way it used to be. Not high-end by today’s standards, but highly listenable and a far cry from the musically-anaemic performance some modern gear can put out.

A system consisting of a Dual 701 turntable, Sansui QRX-6500 receiver and Sansui SP300 loudspeakers would not have been anywhere near Dad’s reach financially when they were new, but boy, does it look like he’s savouring every second of listening time when I swing by to visit. Sinatra called it right when he sang “love is lovelier … the second time around”, even though hi-fi gear has absolutely nothing to do with the song in which that line appears (The Second Time Around).

Methinks me, too, will now put together me own vintage system. Let me dig out all those old open reel tapes we had when I was a toddler …

Lim Juan got into hi-fi for the same reason a good many (but not all) of us did – the love of music. He grew up on gear his dad had. His mother used to work in a record shop where dad bought his LPs, so the seeds of addiction were set before he was even born!