First impressions: “Wireless” speakers have yet to achieve any modicum of credibility in the high-fidelity realm, despite the best efforts of companies like Dynaudio (Xeo) and Linn (Exakt). It’s a new world filled with potential, possibilities and convenience, but audiophiles aren’t enthralled so far.

However, move into the world of portable audio devices – where merely being pleasured by music takes precedent over the nitty-gritty things like timbre, texture and tonality – and you’re likely to be overwhelmed by the offerings. Joe Average, listening to his favorite tracks on a smart phone or any sort of iDevice, has fewer expectations in sound quality – if it’s clear, punchy and plays loud without breaking up, it’s good. It’s a less complicated world out there…

It was with this in mind that I accepted the JBL Flip and Charge portable wireless speakers – I do, on occasion, use my Android-driven phablet and iPad to watch video clips. And the sound from these, well, you know…

Both the Flip and Charge are Bluetooth-enabled, and once you’ve paired one of them to your Bluetooth-equipped device, several hours of extremely mobile playback are guaranteed. There were distinctive differences in the sound though – the bigger Charge had more bass while the Flip was smoother in tonal balance. The Charge’s turbo’d bass delivery, however, comes at a price, I learnt.

Specs: The white-themed Flip (there’s a black version, too), the smaller of these two cylinders, is equipped with two 38mm transducers and a five-watt-per-channel amplifier. The claimed frequency response is 150Hz to 20kHz.

It uses a rechargeable lithium ion battery with a charge time of three hours… at decent volume, JBL claims five or more hours of playback. The Flip also has an auxiliary input so if you can find the right sort of cable, you can even plug in non-Bluetooth devices like an iPod Classic. 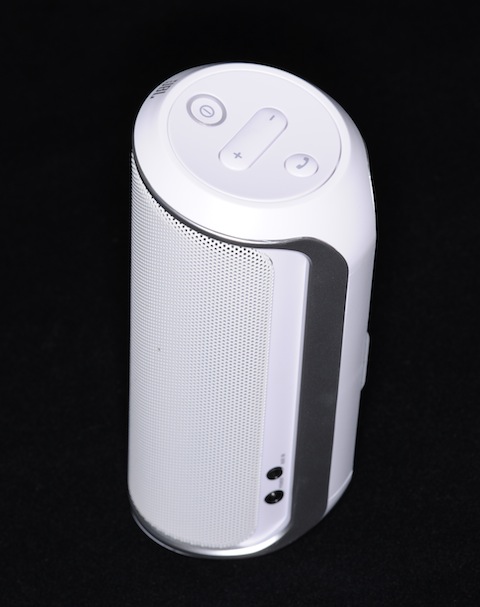 There aren’t many controls – just the power switch that doubles up for Bluetooth-scanning/pairing chores and… a button with a telephone icon. Yes, you can also use the Flip as a hands-free set for your cellular phone, with features like voice recognition mode, call switch and hold.

A charger and soft case are provided. The Flip is 160mm in length, with a diameter of 63mm.

The more striking Charge, in blue-and-white-livery, was launched in response to demands for more bass and longer playback time.

It offers similar specs as the smaller unit, but with a bass port built into the cylinder. There’s the auxiliary input, but the hands-free applications have been excluded here. Instead, there’s a USB power output for charging a phone or tablet.

Playing time is a more impressive 12-plus hours, running from a full charge, which takes 3.5 hours. Again, a soft case and charger are provided. The Charge is 175mm in length and 74mm in diameter.

Both units are made of sturdy plastic and can be played plugged into the charger. 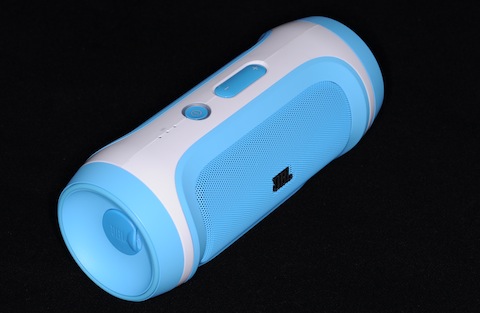 Performance: My friend, a musician with no interest in hi-fi, was around when I first fired up these JBLs. His life is centred around his smartphone, whether it is listening to music or watching videos.

He wasn’t so impressed with the Charge. Yes, it had bass, he admitted, but he thought it lacked some clarity. Then we tried the Flip and his face lit up. This one he liked and didn’t mind the light-footed bass approach, as he felt it was clearer… the upper and middle frequencies of the Charge were muddy in comparison.

And this is the crux of the matter. Features apart, the Flip and Charge take different sonic routes, made more obvious when I paired my Mac Mini (running iTunes, files in .wav format) with the JBLs. The Flip sounded less cluttered and more detailed but lacked the bottom heft of the Charge. The latter’s enhanced bass output came at a price – the higher frequencies were affected. 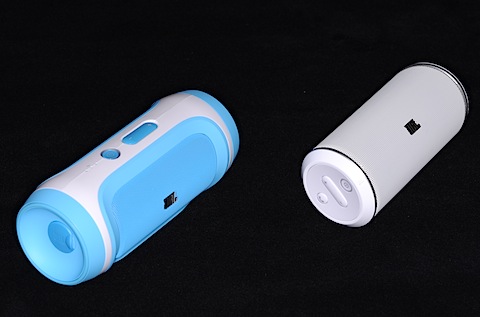 Also, played very loud, both the Flip and Charge sounded compressed and hard, especially with electric recordings. You want serious volume, get a boom box!

With other material via my iPad and phone – YouTube clips and such of MP3 quality – the JBLs were certainly a few notches up from the onboard speakers of the devices. At least, you could hear the bass frequencies with the Flip and Charge.

The good: The multi-tasking nature of both, even if different, is a vast improvement on the sound quality coming off your mobile devices. The Flip’s clarity was more pleasant to me than the increased bass output of the Charge.

The ungood: Obviously, these are not catering to audiophiles with fussy ears, unless you’re looking for a portable speaker system sans wires to lug around.

Final verdict: The Flip and Charge will come in especially handy on holiday trips, as they don’t add much to your baggage weight and take up little space. I’ve yet to hear competing models in the market, but given the price, the JBLs should pose a temptation to their target audience.

Both units also appear to be quite robust and ready for a rough life.

Sujesh Pavithran is an ardent fan of Magnepan and Apogee speakers, loves vinyl AND supports digital formats as he believes they will keep improving, has a yen for tubes and is a gadget-head (shamelessly encouraging consumerism in this sector). He has been reviewing hi-fi equipment and music since the mid-1980s, but occasionally wonders if he should have made a detour into motoring or photography instead