First impressions: One of the joys of dabbling with vinyl replay gear is that even non-swingers of soldering irons, who can’t tell a resistor from a transistor, can have a go at trying cost-effective reversible tweaks, be they DIY-ed or otherwise, on their turntables to see if they can get that much better a sound from the gear they’ve already spent their money on.

One of the easiest items to try changes with is the platter mat. This depends on the turntable one uses, of course – some have the mat, or record support, integrated into the platter, while some have sophisticated vacuum hold down devices built in, which obviates the need for any aftermarket manipulation which would only serve to screw up the hold down process. And there are those with no traditional platter as we know it…

But for the most part, turntables do have a platter and their mats are removable, some coming off even when you don’t want them to! Tthose of the hairy felt variety, almost ubiquitous with British turntables, come to mind. 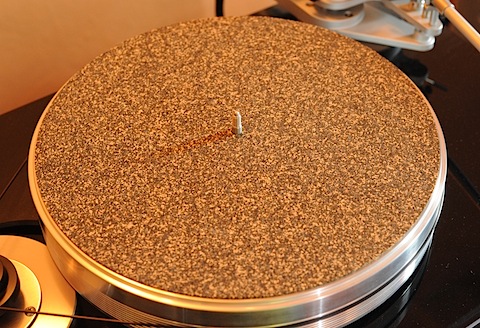 I can imagine the reaction a product like the Blue Horizon Promat is likely to get, “It costs how much… ?” being the virtual standard by my reckoning. My own reaction was more along the lines of “Hmmm, competitively priced in keeping with its rivals, and very well cut too”, in spite of knowing how much a cork sheet costs in an art supplies shop and that it isn’t too difficult to use a cloth- or pizza- cutter to get a decent enough circular shape from it. Of course, I’d already suffered a similar initial adverse reaction many years back when I bought my Ringmat 330 Mk II XLR.

But more than that, I just felt as if it was deja vu all over again seeing this product. The two layers, one with a bigger centre cut-out, and the tone and colour of the cork-composite I had seen before somewhere… and it even smelled familiar. It dawned on me then that I had encountered something near-identical a few years before in the form of the Thorens Cork Mat I was given to try out when I reviewed the Thorens 309 turntable for a now-defunct newspaper hi-fi column. I can’t hand on heart tell you it’s the same thing, but it looks like it, and sounds like it, and I could ask the question of myself a hundred times and I’d just give the same answer (now, where have we heard that before too?).

Specs: Blue Horizon’s product literature (as did Thorens’ for its own mat) states the mat is made from a unique composite of India rubber, cork and leather. They claim “Its fine, granular composition keeps firm hold of every record played, whilst suppressing the resonance generated during playback.”

Coming in two layers, one is meant to use them singly or in combination, depending on the weight/thickness of the record. BH’s objective here is to “make it easy to adapt to different record thicknesses without needing to alter tonearm height (VTA) – use the first layer for audiophile-grade vinyl, add the second for standard records.”

The diameter of each layer is 293mm and roughly just over 1mm thick. The material looks like no common cork sheet I’ve encountered in an art shop, though – distinctive and distinguished looking with no loose grains or cork dust, and near perfectly flat as far as I could see visually. And again, superbly cut whether mechanically, or with the kind of laser Auric Goldfinger would have sitting in his backyard, I can’t say. If  premier fabric makers Ermenegildo Zegna were to try their hand at a cork sheet on a lark, it would probably look and feel something like this.

Okay, enough of talking cork already – how does it sound?

Performance: This is going to prove tricky as overall results varied with the record player it was used on, and also what one did in consequence of the change in sound, like backing off on the tracking force or adding a record weight to the equation, as well as what material the original mat one switched from was made of in the first place.

I will upfront admit it was not possible to duplicate the exact heights which the records first sat at before the mat changes as three different Rega arms were used, and none of the spacers I had on hand were so fine as to be able to near-exactly retain the original VTA initially worked from. That is, if you can hear such small VTA differences – I couldn’t for the most part in other tests, so make of that what you will. Depending on the cartridge, I almost never heard as noticeable a difference as some other reviewers claim to hear with just about every cartridge when the VTA changes by the fraction of a millimeter.

A lot of the testing was done with headphones. 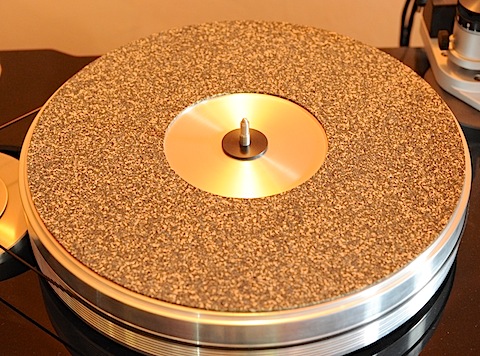 First under the gun was a Rega P1, which has a stock mat which virtually calls out to be changed the moment one acquires this record player. The Promat certainly shook things up for the better here, the reduction in vinyl “whoosh” being so substantial as to convince one that some kind of filtering had been applied in the amplification stages… except there wasn’t any, or any clear downside to it.

Bass heft improved significantly to the point that the agricultural MDF platter didn’t sound so bad after all. Acoustic bass note start- and fade-off points became more distinct and the improved tunefulness allowed the humble player to just better entertain with every record that got played on its now corked platter. The Promat, even as a single layer, did add some measure of mass to the MDF platter as it weighed more than the stock mat, so this could only have helped but I felt it improved all the more when used in conjunction with a brass record puck.

Next up was a Roksan Xerxes. Bass power, already a noticeable strength of this player, equally gave the impression of more firmness, but here there were changes in the midrange quality, which seemed to lose a little airiness and detail when compared to the stock mat. For me, the Ringmat was preferred to the Promat here as substitute mat, even if it was more a judges’ split-decision kind of victory than a clear knock-out.

The Promat, used in two layer configuration, really came into its own with the Garrard 401-RB1000-Linn K18II combination. Together with similar perceptions in bass tunefulness heard with the other players, one almost felt that any sense of smearing had been banished and the treble especially tightened up with a better sense of organisation. Nelson Riddle’s string arrangements accompanying Frank Sinatra’s vocals on a track like Witchcraft (from the album Sinatra’s Sinatra) sounded that little bit more lush, the horns and other wind instruments coming in with convincing authenticity. Returning to the stock rubber mat of the 401, one could only shake one’s head at how it sounded almost bland and devoid of tonal variation relative to what had just been heard with the Promat. 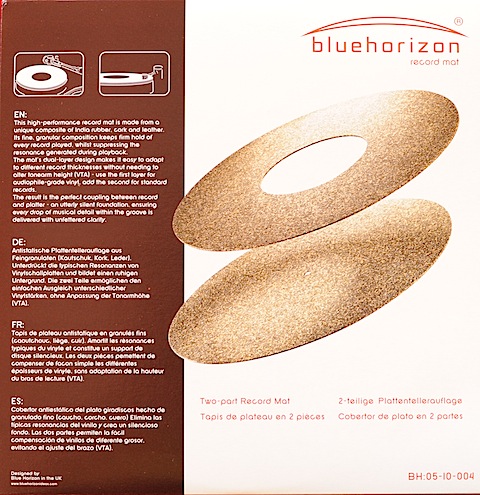 There were swings and roundabout improvements, and downsides, which I don’t have space to go into when doing comparisons with other mats I had at hand with the test turntables. One combination I particularly liked with the 401 was using one layer of the Promat topped with an acrylic mat and the ultra-thin mat from the old Sumiko Analog (yes, American spelling) Survival Kit, used with a damped glass record weight. So, one could use the Promat not only on its own, but in one’s own cocktail combinations to achieve subjectively preferred results, the Promat in most cases providing a silent foundation layer to build upward from when used with metal platters.

The good: It goes a long way toward doing what it says on the tin… err, cardboard sleeve. Indeed, you do get less surface noise and smearing when moving from a standard felt mat and better dynamics, plus having the tonal colours in the performances come through more vividly.

The two-layer approach allows for less fuss when changing from thinner to thicker LP records.

The ungood: The sheer shock of initially being told of the price, for some. And such is the nature of the vinyl playing process and its adherents, that there is no guarantee one will necessarily like the results in the context of one’s own vinyl rig, sonic priorities and tastes – seeking a sale or return arrangement with the dealer would be strongly recommended. Or you could try DIY-ing a basic cork mat first to see if the flavour sufficiently induces you to want to investigate the premium experience the Blue Horizon Promat can offer.

Final verdict: I feel weird saying this (as weird as I felt the day I handed my cash over for my Ringmat), but it is a high-value proposition in the right replay rig. I still do wish it didn’t cost so much (as with the Ringmat), though.