First impressions: Talk about trickling it down. First, there was the 8200CDQ, quickly followed by the 8200DQ, then the smaller M-DAC and now, the Q-DAC. They all have one thing in common – apart from being DACs, they also function as preamps… which means one less component in your system. Less is often better, for me at least.

The Q-DAC is Audiolab’s entry-level offering in this area, sporting mostly the same DNA as its costlier siblings. However, there is no convenience of remote operation, unlike the M-DAC and the others. But that’s a minor inconvenience, once you read the spec sheet.

I immediately linked it to my iPod Classic via the Audiolab iQ dock, which outputs only the digital stream from the device and not analogue. Even if I wasn’t blown away at first listen, I heard many things I liked about the Q-DAC… its finesse and clarity were impressive. Promising, I thought. But the lack of a remote was something I fretted over from the start. 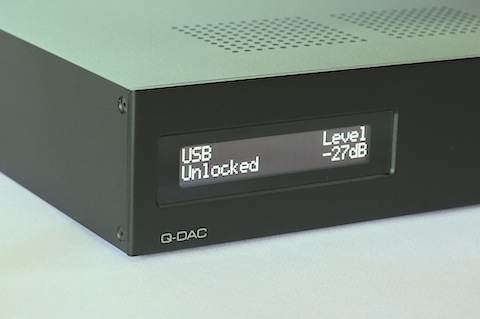 Specs: This half-rack unit is the same size as the costlier M-DAC, which means you save on some space. The 2.93-inch high contrast OLED display is a step up from the tiny windows you’ll see on some competing models. Next to the display are the “menu” and “source” buttons, followed by “up” and “down” buttons. At the end of the panel are the headphone output and power switch.

Around the rear are a pair of analogue and two digital outputs (coaxial and optical). Three digital inputs are provided – coaxial, optical and USB. There are also 12V trigger sockets. The power socket is fed by an outboard supply unit.

While the Q-DAC can drive a power amp or a pair of active speakers directly with its variable output (2.2Vms), there’s also an option to set it a fixed output and let it function as a standalone DAC.

Now for the inveterate tweakers – the digital filter mode has seven options (Optimal Transient, Optimal Transient XD, Optimal Transient DD, Sharp Rolloff, Slow Rolloff, Minimum Phase and Optimal Spectrum). The last choice is supposed to provide the most technically accurate response in the frequency domain. However, time-domain pre-ringing is present, and Audiolab says this can lead to listening fatigue. 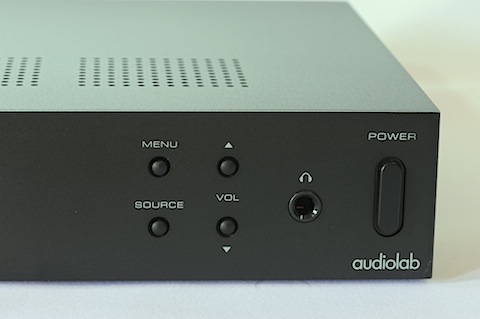 The Optimal Transient mode is to counter the less salubrious effects of the Optimal Spectrum setting – it has inferior measurements but exhibits a purer and more natural presentation, according to the manual.

These modes are cycled through for selection when you enter the menu, which also lets you set display intensity, and check track information (if available), sampling rate (nominal and actual), jitter rejection (automatic, low/medium/high bandwidths), phase, default input and trigger functions. If nothing else, the Q-DAC is at least well thought out. The manual is comprehensive, with details provided for setting up with a computer output.

The engine of the Q-DAC is the now-familiar ESS ES9016 Sabre 32-bit Ultra converter using “patented hyper stream DAC and patented time jitter domain eliminator”. The asynchronous USB input supports 24-bit/192kHz streams, which is also the resolution for the coaxial digital input (24/96 for optical, however).

Audiolab describes the 3kg Q-DAC as having a high-current, high-linearity RCA singled-ended and Class A output stage, with a high-current/linearity Class A headphone amp. There’s little to complain about the build quality, which is efficient. The unit is available in black or silver.

Performance: The Q-DAC was used both as a standalone DAC and preamp, with my CD player, iPod Classic and digital streamer serving as sources. Don’t let its “entry-level” position mislead you… I’ve heard the M-DAC, and its little brother doesn’t fall behind very much in sonic quality.

I was, however, somewhat hard pressed to identify significant shifts in performance when cycling through the seven digital filters; the effects were subtle rather than startling, in any way I used the unit. I can say the same for a number of DACs I’ve tried with this feature… perhaps more sensitive ears than mine will perceive more marked differences. I stuck with the Optical Spectrum/Transient settings for most of the time.

Here, in these modes, the Q-DAC proved to be relatively additive-free and involving. There’s no hardness to the sound, and the presentation is smooth and clean, which is what one would expect of something with the Audiolab name on it. While not the sort of equipment to make the listener go “wow”, the Q-DAC certainly presented much by way of detail and clarity.

Perhaps it has less grunt than what I would want, and this was more obvious when the Q-DAC drove a power amp directly – with some equipment, even at soft volume, you can hear the bite and control. The Q-DAC is a bit more easygoing in this respect, its presentation less urgent than the tube-equipped DAC stage of my CD player (which can be accessed independently).

Indeed, this was the sole comparison I had, as my Ayon CD player will also drive a power amp directly. The Ayon’s DAC has more authority and weight, the Q-DAC had a lighter and more forgiving approach – some prefer this. And remember, there’s a big difference in price between the Q-DAC and Ayon! Place the Q-DAC within a more modest system, and it shines better.

The good: The Q-DAC is a well-equipped player, and if your musical tastes run to jazz and folk, and some pop, it can be pretty impressive in the right system. Tweakers, of course, will have their fun with the filters. That it can capably drive a power amp hooked to moderately efficient speakers lends it some versatility.

The ungood: I know it’s built to a price but many will miss a remote handset for volume control. Can also be found out with music of a grander scale, in terms of dynamics and drive.

Final verdict: If you’re looking for a space/component saver, this one ticks the box. If you want features, the same, and value for your money as well. If you don’t need a remote control, well, the Audiolab Q-DAC fits right into the scenario.

It’s more than a decent performer sonically, if not a Swiss army knife, and is capable of impressive results with the right sort of music and in the right system. Certainly worth exploring, if you’re in the market for such a things.