First impressions: Of the Pro-Ject Audio components to have crossed my path, my runaway favourite has to be the company’s Tube Box SE II model.

Sure, its vinyl replay rigs offered good-to-outstanding value, and the “Box Design” digital replay rigs sounded competitive at their respective prices, but the little mini Ongaku-esque looking phono stage just delivered a performance which had a surprising ability to enthrall, even in a system way beyond what the component seemed to aim to occupy in life. It was the over-achiever in a talented family.

Well, all products, no matter how good, have their lifespan, and the Tube Box SE II had to either evolve into a newer, more refined and hopefully improved, version or make way for a new model altogether. Pro-Ject seems to know when it is on to a good thing so it looks like the company has chosen the former route for this product.

And here it is – meet the Tube Box DS. Looks-wise, there is very little difference from the SE II; noticeably, there now seems to be some kind of potentiometer on the fascia (more on this later) when there was previously only a little press-button power switch (which remains there but takes a step to the left as seen from the front of the unit). 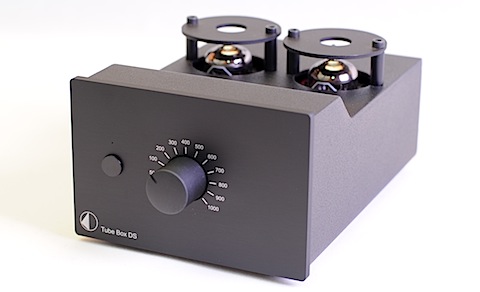 Specs: The same twin-tube complement as before (2 x 12AX7/ECC83) is visible through what looks like semi-open ICBM (as in inter-continental ballistic missile) launch tubes.

The tubes themselves come encircled with metallic tube coolers which are hardly visible on initial inspection, something most welcomed indeed to prevent them from getting too hot for longer service life and, presumably, aids in achieving better sound quality by helping regulate operating temperature and dampening resonances. Just for clarity, the tubes only come in at the back end, ie at the output stage. The amplification components are solid state so this is better described as a hybrid than a pure tube amplified phono stage.

Round the back, there is a riot of jumper-plug selected settings to enable the user to try to optimise the unit’s performance with the cartridge of choice. The first thing to try is the Subsonic Filter, followed by setting the input gain to have the Tube Box DS work best in the context of the test system. Then depending on the cartridge type, if MM, one can select the input capacitance to try to get the best electrical match out of the cartridge and tonearm cable’s characteristics. If one is using a low output MC, input capacitance would not be of prime relevance, so one can then play with the input impedance via the rotary control (so no, it is not for controlling volume then) on the unit’s face to see which loading the cartridge likes best. 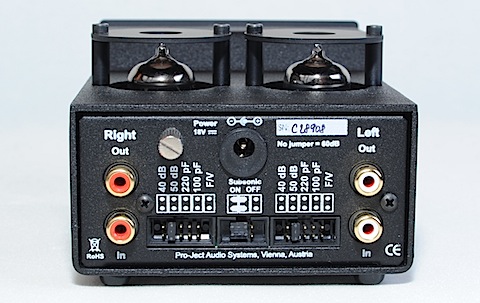 The DS measures 103 x 72 x 144 mm (w/h/d) and has a shipping weight of around 1.1kg. Inputs and outputs are of the RCA single-ended variety. To my understanding, it was designed with input from outside consultants of some repute and built somewhere in eastern Europe.

The jumper plugs are small and fiddly, and there was always a fear I would break a pin or two when handling the Tube Box DS’ settings. Given my age, and the joy of failing eyesight which comes with it, I tried to minimise the need to handle the back of the Tube Box, so I replicated the standard settings found with my other phono stages to enable comparison to be made to assess comparative performance based on consistent electrical parameters. Well, that’s me, but if you buy one, hours of fun await you.

The outboard 18V power supply is a little plug-top affair, and this is where things can be improved on. I think the manufacturer plans to have better power supplies made available as upgrades in the future. 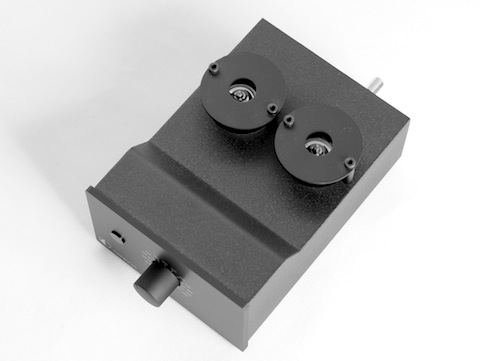 Performance: All the positive qualities experienced with the Tube Box SE II model came rushing through with the few initial pieces of vinyl spun, which were of an orchestral nature – the big and rich sound with a wonderful sense of palpability and spaciousness certainly made for engaging listening, even in the earlier stages of the running in process. Imaging and separation were always strong points, those glass bottles doing their thing without slowing things down or mushing things up in this circuit implementation.

The one other quality that stood out was that it avoided sounding etched or analytical at all times, rendering music in an organic and natural manner that had the “sounds right” feel to it, that kept one listening to LP after LP far longer than intended. The little Pro-Ject had good bass reproduction and a midrange that did a very credible job of making voices sound eerily real (a recording of Bob Dylan singing It Ain’t Me, Babe could convince someone standing outside the room that Bob had teleported himself into my humble digs for a one-time command performance).

Also a strong point was piano reproduction. The resonant quality of the sound of felt-covered hammers striking steel wires as it bounced off the open grand piano lid had a credible ring of truth to it; long, sustained notes fading out in a way an ABRSM Grade 8 piano practical examiner would want to hear it, in spite of knowing full well the candidate would be playing when nervous as hell. The piano pieces also showed the little Pro-Ject had good dynamics, but here, if compared to the more expensive likes of the Parasound JC3, could sound a little pedestrian in absolute terms. Overall detail rendition was also where the more expensive unit showed up the limitations of the Tube Box DS.

When listening via headphones, in comparison with the ADL GT40’s own internal phono circuit (the GT40 also acted as headphone amp when the Tube Box DS was connected to it at line level), the most noticeable difference was the Tube Box DS had an airier open presentation – again, that superior sense of “space”. For me personally, this actually mattered more in headphone listening, making it more tolerable for longer listening sessions (I admit I am not much into headphone listening, unless dictated to by circumstances – I spent too much time in my youth listening to cassettes on a Walkman, like many of those my age, so maybe all those iPod users may still morph into hardcore audiophiles who savour the sound of a good pair of loudspeakers). 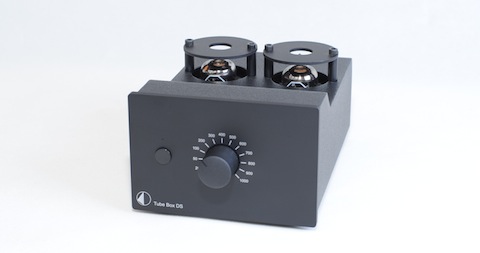 Some observations about the settings. When engaging the rumble filter, very little difference could be heard, so I just left it off at all times during formal auditioning. Your set up may or may not benefit from this, depending on the quality and condition of the turntable.

As more MMs than the sole single MC was used during testing, I tried out the different capacitance settings. I could hardly hear any overt differences with the RB1000-Rega Exact, but the Linn K18 II and Grado Prestige Black-P rather liked lower capacitances, as the higher settings could cause them to sound slightly bright to my ears. Why this is so (I always thought higher capacitances would dull the sound, no?) is something for those with the relevant electrical expertise to explain.

I have more experience playing with input loading for MC cartridges than MMs and I have experienced before, major changes in sound presentation when a given cartridge is loaded differently. I was rather surprised then that I couldn’t hear much differences in the various load settings with the Benz Micro Ace L on the RB1000. The cartridge manufacturer specifies a wide loading range of between 100 Ohms to 47 kOhms, so I guess I lucked out in getting one of the un-fussier high performance budget MCs out there. My usual Parasound JC3 also has selection for either a 100 Ohm or 47kOhm loading in MC mode, which I have tried before. While I do think I heard slight differences, even then, if I were to have someone randomly switch between the two impedances, I wouldn’t bet I could consistently identify which was which. 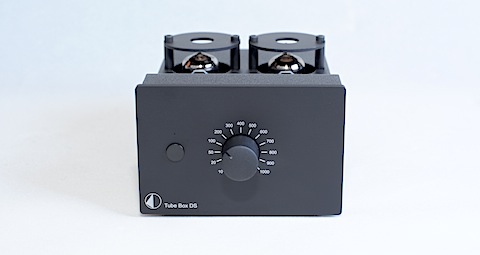 The good: With this degree of flexibility built in, one need never worry about facing a situation where a future cartridge purchase turns out to be a disastrous electrical mismatch with the Tube Box DS phono stage.

Sonically, it would be just the thing the doctor prescribes if your vinyl replay system is in need of an infusion of warmth. And given the sound quality produced, one can put the hi-fi worries aside and just kick back and relax to the music, or get up and rock to it, as the case may be.

The ungood: Well, the little blue LED on the fascia, while not exceedingly bright, did overwhelm the glow of the tubes seen from the distance of the listening position. Maybe those suffering from audiophilia nervosa and have an irresistible impulse to keep trying different settings (if available) may want to get a simpler unit.

Final verdict: Recommended wholeheartedly. For the price, the Pro-Ject Audio Tube Box DS really is something special and will have one thumbing through one’s record collection to enjoy them all over again.