THE world’s first reference-class portable DAC/headphone amp. An ambitious billing, but that’s how Chord Electronics refers to Hugo, which the UK manufacturer will be launching at CES 2014 in Las Vegas (Jan 7-10).

The package is mighty, though – four digital inputs, Bluetooth, and advanced 384kHz PCM and DSD 128 playback for high-resolution DXD (Digital eXtreme Definition) music files. Hugo can be used as a portable head amp/DAC or as a component in a high-end static system. It – okay, he – features bespoke technology and the same FPGA circuitry that has driven a number of Chord digital products to world acclaim over the years. 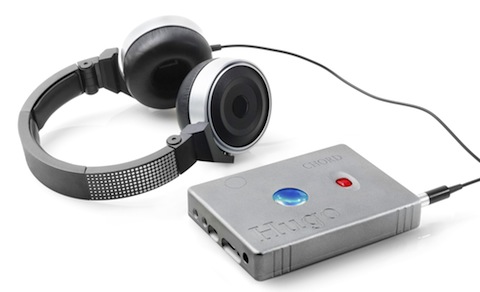 Hugo can decode sample rates from 44.1kHz upwards to 384kHz, and has two advanced USB inputs: one driver-less input for legacy USB devices like the iPhone and iPad (up to 24-bit/48kHz resolution) and one asynchronous high-definition USB port for 32/384kHz and DSD128 formats. A coaxial (24/384) and optical (up to 24/192) input each are also offered for expanded connectivity.

There’s also A2DP Bluetooth capability, using a custom-made module with the aptX codec to feed a digital signal directly into the DAC circuitry – Chord assures that high-quality playback sans cables can be enjoyed in this manner as well.

Power is not routed in via the micro USB input for legacy devices. Instead, Hugo has an inbuilt battery-charging circuit, a full charge taking about two hours, for 14 hours of playback time. An advanced reference-grade digital volume control is another feature here. 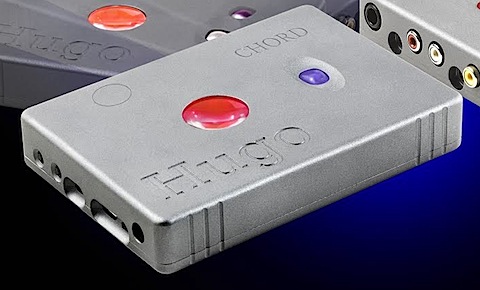 The unit’s casework is precision-machined from aircraft-grade aluminium, and sports a bright silver, hard-anodised finish. A “porthole” lets users peek into the internal circuitry, the colour changing depending on the incoming sample rates.

One full-sized headphone jack and two mini-jacks are provided – for a bit of gimmickry, Chord includes an “all-digital psycho-acoustic delay and crossfeed DSP-cored codec” for an “out-of-the-head” listening experience via headphones.

We’re told Hugo will ship in January, so check with your local Chord dealer for more details.