I have yet to come across anyone who didn’t agree that some of the best listening they’ve had from their system was in the wee hours, when the demands on the power grid in one’s location came down. And that was in a time when we only worried about fluorescent lights, microwave ovens and refrigerators, way before the days of cellular telecommunications devices, personal computers, WiFi routers, repeaters and what have you, which we have to put up with in 21st century life.

Yet, not everyone agreed that employing a separate power line conditioner for one’s hi-fi system was a good way of tackling the problem. There are sound technical arguments for this, which I am not the best person to explain, but have absorbed enough of to be convinced.

So, while I did not dismiss power line conditioners altogether, I preferred to address the issue with a more belts-and-braces approach – I had a dedicated mains spur, with more substantial wiring than the norm, installed when I moved into my house and used overkill 15A and 26A fuseless, un-switched outlets at the wall instead of the normal 13A outlets. 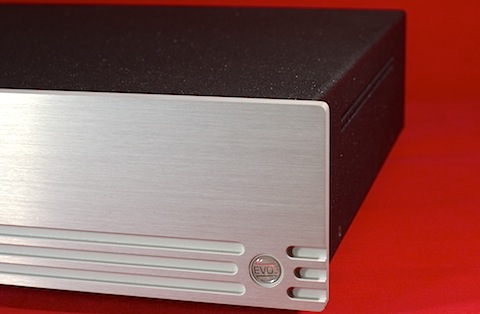 I found that this, for the most part, obviated the need for any kind of conditioner, and I only used my AVIA Powertrans Junior unit for surge protection of my source components (amplifiers were always direct-to-the-wall, for me). I still did test several highly-rated power conditioner units in the hope that they would bring a meaningful performance uplift, but virtually all tested didn’’t sufficiently impress to result in a purchase, mainly (no pun intended) because I had minimal issues to begin with.

And then my son grew up and could no longer share a room with his sibling, and the not-unanticipated day came when I moved my stereo out of my once-den so he now could have his own room, into my master bedroom with its close-to-35-year-old original mains wiring. It was then that I began to pay closer attention to what else was out there in this type of audio system accessory. I was sorely tempted to purchase the review unit when I test-drove the IsoTek Evo3 Aquarius, but money was tight back then (which always seems to be the case when you come across a non-essential, yet highly desired, item to purchase!).

I didn’t need a second invitation from the Editor to take up the assignment when he informed me that IsoTek had a cheaper unit, which the local distributor had submitted for review.

BITS AND PARTS: The IsoTek Evo3 Solus (just “Solus”, henceforth) is a component-width mains power line conditioner/distributor-cum-surge protector dressed in smart metal casework, looking suave with an aluminum-ish brushed faceplate that had grooves in its lower half so as to break the monotony, had it been all flat. These IsoTek units were clearly designed to sit proudly on the rack along with the other components and not on the floor or hidden elsewhere out of sight. Dimensions were 444 x 105 x 305mm (w/d/h) and it weighed in round the 7kg region.

The review unit came with UK-type three-pin 13A outlets, which left me flabbergasted. In the manual, the illustrations showed these were rotated a little from the notional vertical axis so as to give some clearance space for the wire to exit the mains plug (the lead is at a 90-degree angle to the pins, as opposed to being in the same line as the pins for those from the US and Japan, for example). There was inadequate clearance room even though the unit’s stock feet did seem a little taller than usual. Most of the mains leads I had were too inflexible to be force-bent to fit.

The only way to use the unit then was either to raise the same (which I did, on some wood blocks), have it sit upside down (not recommended, I would assume, and definitely unsightly), or hang it back right at the edge of one’s component rack (assuming the same to be of the open-plan variety as to be freely accessible). This surely is not one of the finer moments in the history of British engineering ingenuity. Assume the position for six of the best then! No, not as meant by some headmaster or disciplinary teacher in a good ol’ UK public school after you’ve been caught for some behavioural dereliction, but by this, I mean you get six outlets to which you connect your components to. 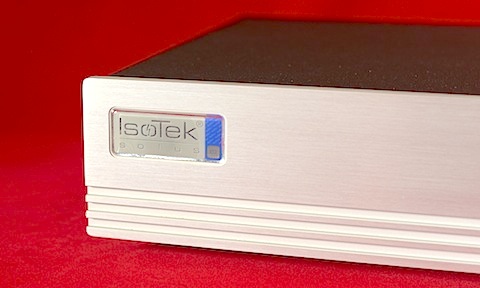 IsoTek claims that a full 10A of current can be drawn at any time through the Solus, delivering power of up to 2300VA with unrestricted transient ability. The company also claims that the Solus can handle power amplifiers being plugged in. I wasn’t confident enough about this to want to plug in my dual-mono (two power cords) “single-chassis monoblock” Mesa Baron power amplifier, but did plug in some smaller integrated amplifiers to test this aspect.

No mains lead to connect the Solus to the wall outlet is provided as standard, so the distributor included one of IsoTek’s basic power cords to be used with the review unit. The claim is that better performance can be had with one of the manufacturer’s more upmarket power cord offerings, but I tested the unit as received, so do be cognisant of the unit perhaps not having been tested to the optimum level of the manufacturer’s claims.

Apart from the performance-enhancement aspects, or should I say, mitigation of performance-limiting artifacts’ aspects, the Solus also acts as a surge protector for one’s plugged-in equipment. I never got to test this (thankfully!) but as someone who has suffered equipment damage from brown-outs and lightning-strike effects through the mains before, it is something desirable to have. But I did read somewhere before that IsoTek makes no extravagant claims that its power conditioners can protect against direct or close proximity lightning strikes to one’s abode!

IN CONCERT: I commenced by throwing the Solus at the deep end after some run-in time. I plugged in a Compaq desktop PC (and a monitor, of course, a LCD flat screen unit) running Windows XP and playing FLAC and WAV tracks through an ADL GT40 DAC connected via USB, with an Exposure X amp with its volume on full (the ADL serving also as level controller) driving Triangle Ikoto speakers.

I have to say that, compared with the same combination being plugged into a bog standard mains bar, there certainly was an audible improvement in performance, noticeable to a degree which surprised me. A WAV file of Yoyo Ma playing Saint-Saens’ The Swan via Foobar 2000 gained a degree of subtlety and delicacy the earlier set up didn’t contrive to display, and I think this is probably one of the better ways to demonstrate the effectiveness of the Solus at what it is claimed to do, even if it is an unlikely set-up (most are likely to use a laptop to source the string of numbers that gets converted back into music).

I then switched to something more traditional, a Roksan turntable with a Benz Micro Ace L cartridge with phono equalisation by a Parasound JC-3, a source capable of displaying lots of low level subtle detail, volume controlled via a diyparadise EVA passive light dependent resistor “preamp” with a Mesa Baron supplying the muscle (the Baron not connected to the Solus) heard through Sonus Faber Guarneris.

While I think I did perceive a slightly blacker background here, I have to say I heard nowhere near the differences I did with the computer-based set up. Perhaps this was due to the components, which were most likely to be improved via a PLC, the phono stage and pre-amp, not being so relevant in this case – the Parasound has a very robust power supply on its own and the EVA, being a passive unit, didn’t depend on the mains for performance, even if it had to be plugged in to function.

After listening to more combinations, I felt that the Solus seemed to benefit the integrated amplifiers I had on hand most, especially when a digital replay unit (like the Marantz DV7001 unit used to play CDs, plus the only two SACDs I have) was used as source. The improvements manifested themselves as a greater sense of ease to the sound, with more subtle detail becoming noticeable, even if these weren’t completely masked before, with note starts, stops and fade-outs being conveyed or perceived by the listener that little bit easier than when the Solus was not supplying the mains juice.

All this really helped in conveying the emotion in the music. The little inflections on vocals, the subtle fretwork and chord changes of a guitarist, gentle, quiet slaps on an acoustic bass’ strings by the bassist, all this just was better conveyed. I felt like a Woodstock hippie by proxy when hearing Joss Stone’s cover of John Sebastien’s I Had A Dream even though neither I (nor she) are from that generation. 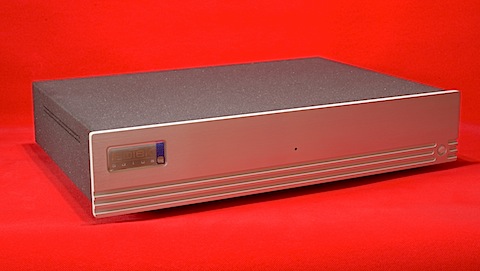 APPLAUSE:  Provided one has issues with one’s mains quality to begin with (and who doesn’t, in this day and age?), the Evo3 Solus is a good purchase that will bring returns in terms of enhanced listening pleasure. That’s what the game’s about, and the Solus helps one’s hi-fi system bring out its A-game. No, it doesn’t give one a near night-and-day change like one gets from switching from a good little loudspeaker to a really, really good big loudspeaker, so do keep in mind the context and degree of the improved listening experience I am trying to convey in words here.

BUT…: To be blunt, I would still prefer the approach of having a dedicated mains supply with attention paid to good grounding to channel away noise than, or at least before, resorting to use of an external power line conditioner unit as “first line of defence” against mains problems.

I suppose this is the kind of argument that is easily put paid to in reality - if you didn’t do it at the stage your house was being renovated or rewired overall, what are the probabilities your spouse will let you bring in a wireman and his co-contractor to hack your (Ha ha! “Her”, actually) beautiful walls, just to install wires for the sake of improving your hi-fi listening experience? And what if you were living in rented premises?

FINALE:  Any component that takes us further forward in the path to musical enjoyment deserves a recommendation, and I am giving mine to the IsoTek Evo3 Solus. In the end, I decided not to purchase this unit because I still felt I would, if I could conjure up adequate funds later, make a stretch for the Evo3 Solus’ bigger sibling, the Evo3 Aquarius. That’s just me – as they say, your mileage may vary.