Creek Evolution 50A – a resolute amp

The integrated amplifier is the component that helped launch many a specialist British hi-fi company, or at least was the product that helped put such companies on the map. Those of us that got into hi-fi in the previous century may recall, among others, the first products of Arcam (then A&R Cambridge), Audiolab, Nytech, Inca Tech, Sondex, Creek, etc, in the 1980s, being integrated amplifiers.

Not all of these names are still around today, but Creek certainly is, and as a brand, Creek, in its earliest corporate guise, got its foot into the door of hi-fi stardom with its “NAD-beating” 4040 integrated amplifier. I recall it fondly as it was my first piece of Brit-fi, replacing an old 1960s Japanese Rotel RA-840 I had inherited from my father.

The mid-budget integrated amplifier sector today remains one of the sectors with the most heated competition when it comes to specialist two-channel hi-fi components. And Creek is still in the thick of it some 30 years thereabouts since starting up. The test subject here is the latest in the Evolution series, the 50A, which is part of a range which also includes a partnering CD player, or perhaps more accurately described nowadays as a DAC with CD transport attached, as the DAC section may be used separately if so chosen.

It is perhaps also a misnomer to call the Evolution 50A an integrated amplifier. Creek has built in the ability for the user to add optional modules such as an AM/FM tuner (which would then make it into a stereo receiver) and its own plug-in DAC board (which apparently will accept signals wirelessly), as well as for phono users, MM and MC boards for one’s favourite matching cartridge. So the Evo is potentially a Jack of many trades. 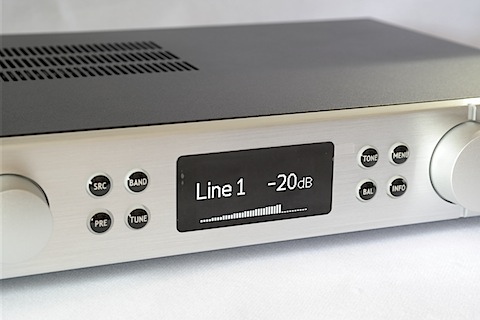 BITS AND PARTS: None of these optional modules were installed into the Evo received for review, so testing was limited to what I got – the basic package. And quite a well-made package it is for the price too, being a metal box with a nice aluminium-coloured facia with two nice rotary knobs and cleverly arranged buttons (eight of them, and all backlit for their designated function to be easily visible in the dark) so as not to give the impression of clutter. The new model certainly has some resemblance to its immediate forbears but also looks like it had spent some time with a personal trainer, appearing leaner and, yes, even perhaps meaner, in spite of its smaller overall size.

The aforesaid rotary knobs and buttons flank a rather showy OLED (Organic Light Emitting Diode) display which has adjustable brightness, and lights up with Creek’s company logo when first turned on. This also gives a visual display of source input selected, volume level and balance control settings, and while one can also adjust tone (bass and treble), I never ventured into using this option (I recognise, though, that this is indeed an attractive feature to have, and may even help clinch the buying decision for some). The display is easily visible in the dark with a comfortable text size readable from across a small room without any tendency to assault one’s eyeballs, even when set at its brightest.

The entire package measures 430 x 60 x 280 mm (w/h/d/) and weighs in around 7.5kg. I wonder how much more weight will be added with all optional modules installed. It all looks really nice and svelte and, to me, preferable to the shoebox visuals of its present day Rega and Cyrus rivals.

The user gets the ability to use the pre-amplifier and power amplifier sections separately (such as when hooking the Evo up to an AV controller in the latter case), input connectors being all RCA save for a pair of XLR inputs which will allow for a source component with such outputs to be used for a potentially lower noise connection (the XLRs can also be used as power amp inputs). This is certainly not the norm for a British integrated amp in this price range, but one that is certainly welcome.

The rear layout looks equally uncluttered and I do indeed like the speaker terminals being near the respective outer edges of the unit, making for convenient connection when some rivals endeavour to find a way to cramp these up.

It is perhaps a sign that analogue source components are passing into history when one examines the available connectivity at the back of the amp. Not too long ago, one could perhaps expect at least six line-level inputs, and a tape loop too, from an integrated amplifier. The last afore-stated one is no longer a feature here and assuming the phono module is not installed, we have a grand total of four line inputs. The XLR-flanked RCA inputs are not meant to be used in tandem, so it is effectively one input, even if you have a choice of connectors at your fancy.

IN CONCERT: Break in of the amp didn’t take very long, and I think it hit its stride with about a week’s use, settling down and changing very little thereafter. I felt that about a half-hour or so of warm up from switch-on was the time it took for the Evo to hit optimum performance.

I would say I was quite pleased with the sound emanating from the Evo, the “size” of the sound not at all in keeping with its petite stature, producing a big and even quite bold result with a fair sense of perceived warmth. My listening notes from the many sessions I enjoyed the music from the Evo could be summed up to the effect of “good composure and control, having the various aspects of the sonic spectrum seguing into one another in a seamless “of-a-piece” feel that recalls the attractive aspects of valve amplification, though it does not sound superficially valve-like.

The Evo certainly does sound more neutral than some of its predecessors in the mids (I can confirm it sounds leaner than the ancient Creek 4140s2, which I still cling on dearly to, in spite of offers to buy it from friends) and there was a sense of the proceedings being awash with detail that isn’t readily apparent with some of its price rivals I have heard in recent time.

Here, the Evo was able to let through the sense of intimacy in some sparse recordings where a solo voice with just a piano to back it could sound utterly engaging to the point one stops whatever what one is reading to dim the lighting just to better enjoy the effect. The sense of atmosphere certainly is impressive for an amplifier in this price class, and perhaps better than some more expensive amps I’ve heard. Single-ended 300B amp addicts may have a legitimate argument to the contrary, but outside of such extremes, one would be unrealistic to fault the Evo for what it achieves against the competition. My own diyparadise Eva-ER Amp 80 combination is no slouch in this area, and for me, the Evo certainly ran this combination close, which is impressive as the Evo is a good bit cheaper.

My impressions on the Evo’s balanced approach should not suggest it somehow sounds sat-on or reigns in the performance with any overt reticence. Aggressive recordings still sounded aggressive, yet because of the composure and control of the Evo, it was still mostly listenable as the results never spilled into being uncouth – just the sense of a recording that leaves a lot to be desired being reproduced as it is, without the electronics chiming in and exacerbating the situation. But when the light fantastic is tripped with wonderful piano recordings such as on the Best Of Tacet 2008 LP, one is in for a treat.

Bass was not exactly subterranean but it certainly was firm and solidly precise, yet with a satisfying sense of fulsomeness without bloat, and more importantly without displaying the opposite quality of undue leanness that even some more expensive solid state integrated amps seem to deliver. The rhythmic aspects were well sorted, helping one enjoy rock tracks without suspicion at any time that monochromatic one-note bass (save in hopelessly poor recordings) was being heaved onto the listener. While perhaps not its strongest suit, I find little in this part of the Evo’s sonic palette to complain about – the growl of electric bass and the resonant quality of a floor tom being struck rang true enough to sufficiently convince, but certainly this is no big Krell or Mesa Baron killer.

APPLAUSE: One could argue a relatively low-priced amplifier like the Evo has no right to sound this enjoyable, and reminds one that in the post-switching amplifier world where budget wonders like the Tripath-based diyparadise Charlize exist (admittedly such a product is not for everyone, but I keep mentally using it as a reference for its outrageously good sound quality for its price), the old school manufacturers are still finding a way to deliver increased performance and value.

Creek has been doing this as an unbreakable habit for virtually all of its existence and it is certainly good to know this new model is no different in overall results.

BUT…: If the idea is to have a big muscle amp with rack mount style side handles and thick faceplates to show off, no Creek has ever done that and this one is no different. I do mourn the passing of the dedicated tape loop from this latest model, but accept this to be the reality of how such products will develop from now on. I harbour a feeling that the older and less sonically-capable Creek amps of yore can perhaps be a little more comfortable to listen to, but in the quest for higher fidelity, one cannot refute that this new Evo is certainly a significant progression from those older amps.

FINALE: This latest iteration of the Evo is a nice little amp with a seriously big musical heart. The fact that it can be enhanced with the various module options, assuming these are up to the high standards of the amplifier section, means it can be planned around as the heart of a potentially very satisfying, modestly priced system with minimal dangling wires which not only saves money but will keep the spouse happy.

I’m happy to give the Evolution 50A a well-deserved recommendation.