EACH time a computer audio device hits the market, another bell tolls for the single-purpose optical disc player. Physical media will not reach obsolescence anytime soon, but the case is definitely building up against it.

Personally, CDs no longer play a role in my digital playback system (analogue playback, in the form of vinyl, is another matter). CDs are still purchased but they only make it as far as to the computer for their data to be ripped, after which they go straight into the shelf.

While it is understandable that not everyone will embrace “physical-less” digital playback so readily, a product like the PS Audio NuWave DAC makes a compelling reason why everybody should. Not only are computer audiophiles able to utilise it but it can also be a significant upgrade to an ageing (or not) disc-spinner.

BITS AND PARTS: The NuWave is a digital-to-analogue converter that can decode data if connected to a computer’s USB port, and any conventional disc-spinner via its coaxial or optical digital input.

Connection to a computer via USB is easy – simply download and install the necessary drivers from PS Audio’s website here, do the usual configuration with any audio player programme of your choice and you’re good to go. First-timers may be feel intimidated by the procedure, but don’t be – it isn’t really all that difficult. For subsequent connection to an amplifier, both RCA and balanced connectors are provided.

No obstacles were encountered during the entire set-up procedure, and I liked how the left and right channel analogue outputs were placed on opposite sides of the back panel – some manufacturers choose to place them in close proximity to each other, which makes plugging interconnects in and out a bit tricky sometimes.

Once placed in the system chain, the NuWave is capable of decoding digital data from CD Red Book specifications (16-bit/44kHz) up to 24/192 resolution. Via USB, the NuWave works asynchronously, eliminating timing issues potentially introduced by the operating system and computer hardware.

In appearance, the NuWave is quite an elegant thing. It has an aluminium front panel that curves elegantly and seamlessly around to its sides. The front panel features the PS Audio logo, and six LEDs that indicate if it connected via USB, coaxial or optical (top row); and if the data is locked on to the signal and running in native resolution or upsampled to 24/192 (bottom row). Two buttons immediately to the right of the two rows are dedicated for selection of the desired modes.

The NuWave’s power switch is located on the back panel, together with the IEC power socket and the above-mentioned inputs and outputs.

The front plate of the NuWave is available in either black or silver finish options, but the shiny top plate only in black. Viewed from the front, the NuWave sits rather low and doesn’t take much space width-wise, but it is actually quite deep and will take up the entire front-to-back space on your rack, with measurements of 6.1 x 21 x 36cm (h/w/d).

Pick it up, however, and the NuWave feels really hefty, thanks to the use of a massive toroidal transformer that takes up more than half the space within the chassis. This is one of the NuWave’s major selling points, the emphasis on giving it the best power supply possible – which is hardly surprising given that PS Audio made its name with power optimisation for hi-fi systems.

Internally, digital decoding duties are handled by 24/192 Burr-Brown engines, with an all-new input circuit based on the PerfectWave low jitter clocks.

PS Audio also says it eschews the use of chip op-amps in its output stage and utilises a discrete, high-voltage class A circuit, which it claims imparts an openness and sweetness to the sound – in other words as analogue-like as possible. 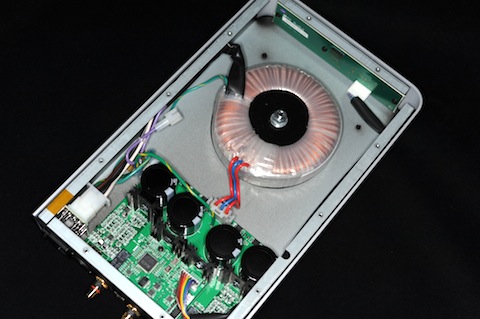 IN CONCERT: To get straight to the point, analogue-like sound from a digital source is what makes me sit up and take notice. Yes, having loads of good, clean detail is desirable, but having all of that wrapped in a warm, inviting sound is something only quality components can muster. The NuWave does just that. This is what drew me to purchase my current M2Tech Young DAC, and also why I rate the HRT Music Streamer HD so highly.

Quantifying this is rather abstract, but the NuWave has this palpability to its sonic that this very communicative. The NuWave makes it easy to hear into the mix and identify instruments in the ensemble, yet without losing the homogeneousness of the performance.

The midrange, where vocals reside, is generous, and it seems to have been tuned to give some emphasis to this band. There’s plenty of detail on offer – perhaps not to the level of the Young – but you can hear deep into every recording and not have to strain to notice it. Bass depth and weight are exceptional, although I would have preferred a little more snap. There’s little to find fault when it comes to typical audiophile desirables like soundstaging and imaging – plenty of depth to the front, sides and back, with unwavering placement of the instruments in the stage.

It is noteworthy that I chose not to select the 24/192 upsampling function when I played CD-resolution material. While engaging it employs more air and a bigger sense of space to the sonic scape, I didn’t miss it in the few times I did not turn it on in the initial stages of the listening process. In fact, in some case of minimalist music (simple arrangements, usually acoustic), I actually preferred the unadulterated version of the data, so it was left off for most part. 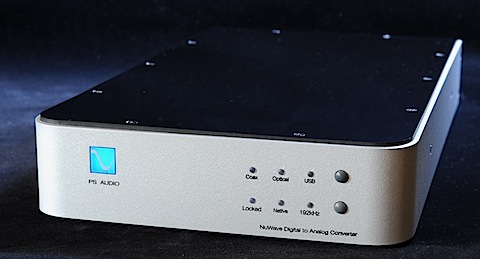 APPLAUSE: The NuWave DAC sets out to do one thing one thing well – to make music sound good. It doesn’t have any other bells and whistles save the upsampling function, and this allows the listener to just sit back and enjoy the music. It appears lot of thought has gone into the product, and even more solid engineering executed to bring it to fruition. With little to distract the listener, one can easily appreciate what an excellent product the NuWave DAC is.

BUT…: No USB cable is provided in the box, which entails using your own – and in the case of those who don’t have any, an agonising wait before you can use your new DAC. Its 24/192 compatibility is excellent, and is better than just mere 24/96. However, with up to 32/384 resolution possible via computer playback, not to mention DSD, the NuWave shows its limits. But then again, PS Audio has the DirectStream to cater for that…

FINALE: There are cheaper DACs on the market, and there are many pricier ones too. What distinguishes the NuWave is you can tell it sounds better than those at or below its price point, while not losing out by any significant measure to those above it.

If you want a quality component and are willing to pay a slight premium on it, you can’t go wrong with the NuWave DAC – and if you want a bit more, PS Audio has other models higher up in its catalogue for that. Highly recommended.