WHAT is this vinyl renaissance everyone seems to be talking about? If that’s the question on your mind – you may find the answer in the form of the Pro-Ject Audio Systems Elemental turntable.

The Czech company’s entry-level record player goes against the mindset that gear used to play back music has to cost an arm and a leg before it can sound good. As an audiophile myself, I admit to some merit to that claim, but the Elemental blows this perception out of the water.

Its existence proves that anybody can hop onto the vinyl revival bandwagon and discover the joys of LP record playback – even on a tight budget. 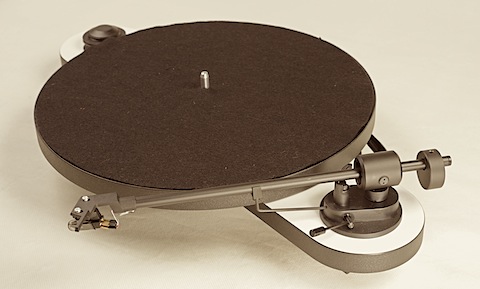 BITS AND PARTS: Before proceeding any further, it should be noted that you get what you pay for. The Elemental is budget-priced, and as such, its component are made from materials that reflect its cost. With the Elemental, the trick is have a cost-effective design that is not over-engineered, yet able to deliver the basic “elements” of vinyl playback.

The Elemental even eschews traditional turntable form. Instead of a rectangular plinth (the base on which all other parts are fitted), the turntable is not much more than a strip of wood about 43cm wide and 10cm deep, with motor assembly, tonearm, and platter attached.One should not expect it to be made from some kind of exotic material – instead the plinth and platter are made of cheap and cheerful MDF, and the tonearm of some light metal.

Significantly, there is a piece of synthetic stone attached to the turntable’s “central gravity mass point” located just beneath the platter, to compensate for its otherwise lightweight materials and to absorb vibrations from the motor or any other wayward resonances.

Notably, there is no need for any adjustments or setting-up out of the box. It comes factory-fitted with an Ortofon OM 5E cartridge, and you only have to attach the belt to the appropriate groove (for 45 or 33 RPM) on the motor pulley, plug the wires into the phono stage of an amplifier (or any line-level input for the USB version), connect the wall-wart power supply and start playing records!

Everything has been factory set (even anti-skating) and save for counterweight adjustment and rotation speed, there are no provisions for adjustment of any other parameter. 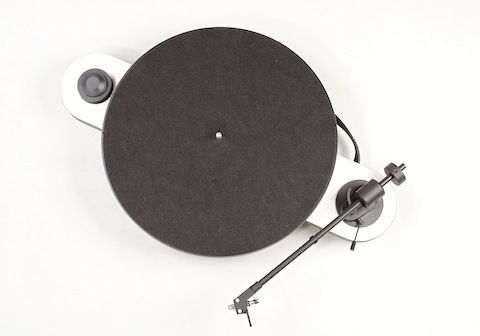 Unfortunately, the cost-cutting comes at a price and the Elemental is supplied sans any form of dust cover, leaving it exposed to the elements. Flicking off dust from its felt platter mat prior to every play becomes routine, but does nothing to prevent layers dust collecting on its exposed parts. Your best option is to cover it with a plastic sheet (there’s a more-than-likely chance fabric will get snagged on the tonearm), but that’s still not an acceptable option. You’re pretty much left to your own devices here, and although Pro-Ject offers dust covers as accessories, these are not cheap nor designed specifically for the Elemental.

IN CONCERT: The big question now is the performance level of what is probably the most affordable turntable available from a major hi-fi manufacturer. The short answer is that it sounds better than it has any right to. It is indeed outpaced when benchmarked against so-called “audiophile” turntables, but you’ll need to shell out at least US$150 more to own one of those entry-level units. Also, there are turntables priced similarly to or cheaper than the Elemental but with the amount of plastic used in these, it’s no surprise many are labelling these “toys”. I wouldn’t disagree.

While evaluating the Elemental, I was more impressed by what this little turntable was doing than I was of its shortcomings – the thought that constantly came to mind was “optimised” and not “compromised”.

The turntable arrived around the time I received the first batch of Led Zeppelin 2014 remastered albums on vinyl. Having acquired the same high-resolution 24-bit/96kHz digital files (from which the vinyl was cut) prior, I was half-expecting the sonic to be obscured by some kind of haze, robbing it of its inherent detail and dynamics. Instead, I was floored by the opening notes of Good Times Bad Times from the band’s self-titled first album. 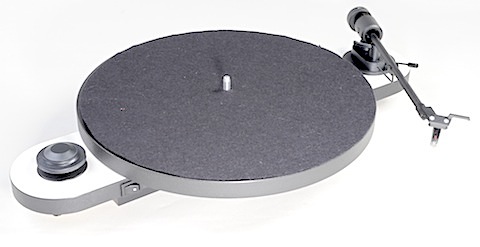 What I heard was a rendition delivered with a good amount of bass impact and punch, coupled with the clarity, warmth and full-bodied directness I expect of vinyl playback. The searing guitars and rhythmic drumming was dynamic and Robert Plant’s vocals were delivered with a swagger I didn’t expect. Pretty much the same happened with rock, pop, jazz, some classical, and my six-year-old son’s favourite – the theme song from Star Wars (yes, I’ve thought him to cue the record himself).

Of course, there are limitations to the Elemental. It won’t dig out every bit of detail from the grooves, frequency extension at both ends is decent, but not outstanding, and it could do with better speed consistency.

The Elemental won’t show up specialist, well-designed turntables, but it will expose those plastic turntables for the gimmicks they are. But more importantly – its performance level fully justifies its purchase for those venturing into vinyl playback for the first time. 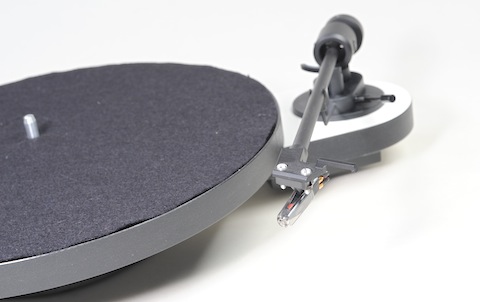 APPLAUSE: There isn’t anything digital that sounds close to the Elemental at its price point. Not only that, it delivers the fundamental characteristics of vinyl playback at a previously unheard-of price. There’s no easier, more affordable first step into the format than this.

BUT…: It sorely needs a dust cover – anything will do. Perhaps Pro-Ject can think of some way it can design its packaging material so it can be re-purposed as a dust cover of sorts. Due to its minimalist design, it also needs some form of vibration isolation to sound its best. Also, the belt comes off too easily and about that felt mat….

FINALE: Simply put, the Elemental has set a new benchmark for budget turntables. Pro-Ject has delivered a musically satisfying performance with a budget turntable that anybody can afford. While some may lament the fact they can’t fiddle around with its cartridge/tonearm setup, consider the fact that the Elemental is not made with you in mind. It’s for the music aficionado and vinyl newbie who wants to hear records, but can’t be expected to know (or learn) how to set-up a turntable.

For those who want to take their first tentative steps into the format, or if you have records lying in storage that you want to give a second life to, there’s no cheaper or easier solution than this. Buy with confidence.