OF the types of audio accessories that have ever been produced, the “footer”, which sits between the bottom of a hi-fi component’s chassis and the surface of the table or shelf it is placed on, is probably the one which has had the most varied of approaches in implementation.

Among those that I have used are metal cones, round squishy (Sorbothane?) footers, wooden pyramids, magnetic repulsion feet, brass spikes, and not least, the excellent Finite Elemente Ceraballs.

I don’t seem to recall seeing footers with horizontal springs, like the Solid Tech Disc of Silence being tested here, before (as compared with spring footers which vertically compress under the weight of the component they support). It isn’t at all an original concept – just take a look at those children’s mini trampolines which one can purchase at the local hypermarket; that’s exactly how it’s done, with horizontal springs. 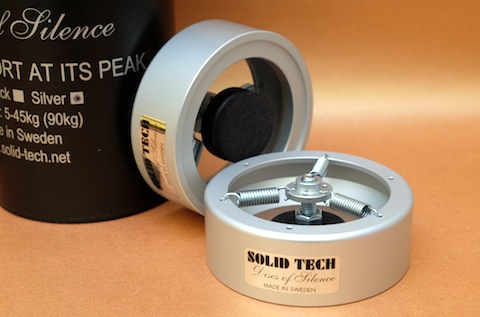 BITS AND PARTS: The pictures of the units pretty much tell you what you get for your money. Each of the cylindrical frame is nicely cut from aluminium, perforated to allow each of the ends of the springs to be mounted. The review units had three springs each, but these can be doubled for use with heavier equipment (alas, additional springs need to be purchased separately).

The springs converge at the centre point to form a suspended hub into which a disc, which is topped with some kind of soft black material, is screwed in. I assume it is this little disc which gives the Disc of Silence its name. One’s chosen audio gear will sit on top of these discs (you’ll need to position each footer assembly to optimise weight distribution), the final effect being the virtual isolation of the audio component from the surface of the furniture platform.

The manufacturer has done measurements of the reduction in vibration at specific frequencies which apparently optimise the isolation of the component to let it perform best. Effective isolation is claimed to start at 8Hz and under typical component load, the resonant frequency of the springs are at about 5Hz. If viewing accelerometer readouts is one of the joys of your life, mosey on over to Solid Tech’s website for the lowdown on the measured results. 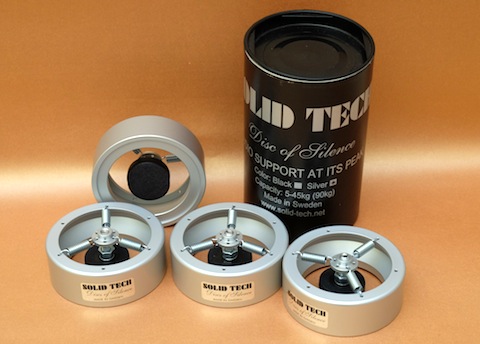 IN CONCERT: First up was a Marantz DV7001 DVD, which usually sits in my living hall in a heavy wooden TV cabinet. It took little to no effort to discern the runaway improvements in sonic quality when playing an SACD. There was a better overall sense of ease with the sonic picture becoming clearer in outline. There was a better sense of rhythmic flow in the playing, fine detail became more discernible and bass notes especially sounded less homogenised and blurred.

Next up was a Technics SL-10. This direct-drive turntable has its own springy feet and I usually site it on an old Mission Isoplat, a simple MDF board with some squishy feet. Inserting the Discs of Silence in place of the Isoplat, however, resulted in a more confused sound than when the Technics was on the Isoplat. The foundation of the music seemed to be compromised with the sound, while sounding freer of the loudspeakers, appearing more diffused and lacking in substance. Some instruments seemed to benefit more than others, the horns in the Beatles’ Sgt Pepper opening track becoming clearer and more prominent, but the vocals and drums were now less well anchored in the overall mix.

Next up, the Discs of Silence were used below diyparadise’s new Scarlett (provisional name) TVC, which is housed in a wood and acrylic chassis which has a metal bottom. Introducing the Discs of Silence brought about what seemed to be a cleaning up of the sound and clichéd as it is, a layer of haze seemed to be peeled away with there now being more “liquidity” to the sound. The Discs of Silence in this application clearly bettered the results than when using Ceraballs, whereas the Ceraballs had produced better results in comparisons when used with the SL-10 turntable.

After having used many different types of footers, I am cautious of making any absolute conclusions that any one is necessarily better than all others for all applications. Leaving comparisons aside, these Discs of Silence work well in most applications. 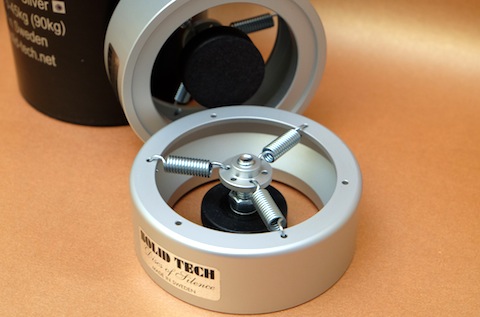 APPLAUSE: When the combination is right, you just feel thankful that you really lucked out in having optimised (or realised, even) the performance of a component you’ve already spent money on. A well-designed footer like this goes a long way in combatting the vibrational gremlins which can compromise the sonic potential of many an audio component.

Hey, I know only too well that some of us have to put our audio gear in, or onto, furniture chosen by our better half where aesthetics rule more than anything else.

BUT…: Boy, are they ever not on the cheap side! Okay, good things seldom are, more so in the world of hi-fi. When it works for the particular component you have, I admit that the temptation to buy is very strong indeed, once you’ve heard the results. Make it “overwhelming” if you carry around more disposable cash than the likes of me.

FINALE: These products were clearly not knocked together on a cold and wet Friday afternoon when things were going slow at the workshop for the Solid Tech boys. They are well made and go some way toward convincing us that we do want to spend our hard-earned money on them.