Naim DAC-V1… all about timing

THE Naim DAC-V1 is the company’s first standalone DAC component to have a computer-compatible USB input. Prior to this, the USB ports on the company’s range of streamers and the all-in-one Uniti units could access certain music files on a USB thumb drive and be connected to iPods, but not directly to a PC or Mac.

The DAC-V1 can also function as a full preamplifier for digital sources (configurable for fixed output into another preamplifier or an integrated amplifier, as well for variable output, via its onboard volume control direct to a power amplifier), and as a headphone amplifier. It, however, does not include any input connection for analogue sources. 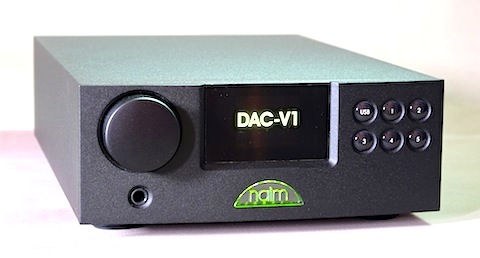 BITS AND PARTS: Built into the familiar Naim half-width zinc and aluminium anti-resonance box, this is one solidly put together component. If you’re an old time “Naimee” wondering if you need a separate power supply to make it work, no, the DAC-V1 has its power supply built in. Unfortunately, the DAC-V1 can’t be upgraded via connection of one of Naim’s external power supplies. Anyone who’s ever had a demo of Naim’s power supply upgrades and heard benefits will be left wondering “what if …?”

Round astern, there is an asynchronous USB input (up to 24-bit/384kHz) and five S/PDIF inputs, being of the coaxial RCA, BNC as well as Toslink optical variety. The USB connection is implemented with technology which Naim licensed from a third party, so this may explain why the company only recently felt the connection was good enough to meet its standards of sound quality. Analogue outputs come in the form of Naim’s favoured four-pin DIN jack as well as a pair of RCA phonos beside it. 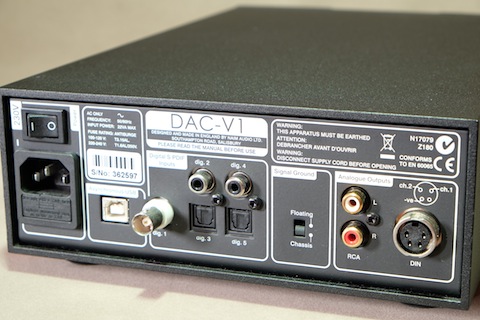 At the bow is a volume knob, the product literature indicating level control to be in the analogue domain. Naim presents the user with an effectively legible green-lettered display which will indicate the volume setting and selected numbered input as well as other functional information.

The headphone jack is for 6.3mm stereo plugs, so those who use headphones with dinkier-sized plugs or other plug types will have to procure suitable adaptors.

IN CONCERT: For someone whose main prolonged experience with Naim equipment was using a slimline series Naim Nait 3, the sense of smoothness in the presentation of the DAC-V1 was a little surprising for me. But fear not, as this does not mean the musical traits on which the brand made its name has gone out the window with the “maturing and mellowing” (I don’t know how else to put it) of the sonic presentation.

With the DAC-V1 directly driving my Mesa Boogie Baron valve amplifier (2/3rds pentode mode, with lowest level of feedback set), the speed and positiveness of the beat in rock and jazz tracks were keenly reproduced. With uncompressed sources such as CDs, played in a freebie ancient Toshiba SD-1200 DVD player which was nearly thrown away by the original owner, bass lines sounded solid and agile, making for an exciting listen. It proved difficult to sit still when any upbeat track came through the speakers, and the combination just pushed many right buttons for me.

With a QLS-550 SD Card WAV player (16bit/44.1khz CD standard) feeding the DAC-V1’s BNC connector, the presentation was quite spacious, and singers and instrumentation were projected into the room with a vibrancy that I had rarely encountered with digital at this price level. Pretty much the same was what I had to say when a laptop was used to play CD standard as well as higher-resolution files, the USB input not seeming to suffer in comparative listening of the same files from the two data sources. 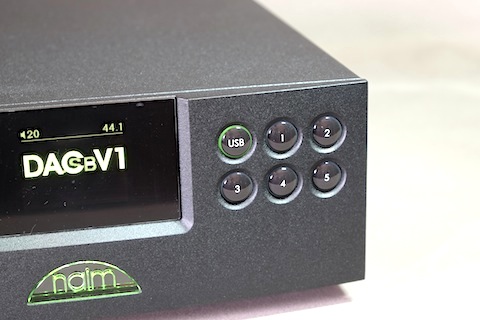 The sound was mostly spacious, with a cleanliness and purity of mid band and higher frequencies which the Naims of old were not thought to have excelled at, if that was one’s preferred type of presentation. It was, in a way, almost too smooth and civilised! That doesn’t apply to the bass, which was kicking and smoking in the way one expects it to from a Naim component.

What was also impressive was the tonal qualities had a convincing sense of authenticity and from a “natural-ness” perspective, the sounds were nicely weighted and balanced with instrumentation and multiple voices seeming to share the spotlight proportionately, with a sense of being appropriately emphasised, without feeling, well, over-emphasised.

This allowed one to sit back and just enjoy listening without fatigue, even in protracted sessions. Very nice! A quibble I had, which may not be attributable to the DAC-V1, was that where I had CD-ripped tracks and equivalent tracks in files of higher resolution, I somehow felt the superior musical engagement that should be coming from the high-res files often didn’t arise in practice. Curious indeed.

As a headphone amp, I had nothing to complain about it, although as one who uses reissued “pre-walkman” grade cans designed back in 1968, I apologise that this is hardly the best way to test the performance of the DAC-V1 in this mode (I normally use a pair of Stax headphones, which need to be connected to the output of a power amp, for more critical listening). Even so, the DAC-V1’s performance was judged superior to that of the ADL GT-40 used for comparison. 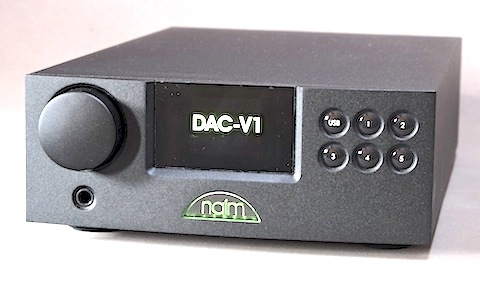 APPLAUSE: The V1 is one of the few digital products I have used that didn’t leave me hankering to play LPs for some time. Which is a good thing, as there’s lots of music out there which will never be released in the LP format. I dug out virtually all my Cantopop, Mandarin and other non-English language CDs for enjoyment to the fullest during the DAC-V1’s stay.

It made for a higher level of emotional connection to the music from these sources, so maybe my priority source will no longer need to involve a nature-hardened carbon chunk being dragged through a plastic groove in the future. A CD rip of Jacky Cheung’s brilliant recent Wake Up Dreaming Mandarin album (never figured Jacky for an Ian Gillan wannabe) managed to sound better, to my ears, than the LP version of the same, for which I paid more than HK$ 300 (I’ve yet to try the blu-ray audio disc).

BUT…: Okay, Naim and its dealers are probably sick of hearing this by now, but the ability to plug in an analogue source would have been icing on the cake. Perhaps Naim wants us to wait and save up for the forthcoming USB computer connection-capable streamer-preamps, which surely must feature in future plans, if we need to have computer USB and analogue source component connection, and want it from a Naim component.

FINALE: Naim components have a way of preserving musical vitality, and with the DAC-V1, cohesive presentation is allayed to the sonic goodies audiophiles tend to look for, being present in good measure. It is perhaps not the best available, even by price standards if ultra-fine detail, airiness, room acoustic cue retrieval, etc are one’s priorities, yet these qualities are impressive from the DAC-V1 as they stand. But those who value musical structure, tone, attack and timing need to give the DAC-V1 a listen.

I thoroughly enjoyed my time hosting the Naim DAC-V1 and had disposable funds been available, this baby would probably be staying put in my system.

Digital Processors, Reviews
Aurender Flow… a headful of fidelity
Cary Audio DAC-200ts does it all