This Pro-Ject is Essential, too

I honestly cannot recall how many, and which versions, of the lower-end Pro-Ject Audio Systems turntables I have had the privilege of testing, so it took me a while to confirm that I had indeed hosted the first Pro-Ject Essential model as a review item before, only that it was the USB version which had a unipivot arm and an integrated phono stage with ability to output digital data for those inclined to digitise their vinyl collection.

The Essential II, the successor to that first model, is the latest in the line which is the next rung up from the bottom of the ladder (occupied by the Elemental model) in this manufacturer’s current turntable product range. It comes in several attractive plinth colours – black, red and white.

The review sample came in red, which managed to look quite attractive. The turntable is likely to be the centrepiece (or the “sticks out like sore thumb”) component of a present day hi-fi system, so it just has no excuse to not avoid looking downright ugly. And yes, I am as amazed as the next bloke that a line like that would sound no less contemporary had it been written back in the 1970s. 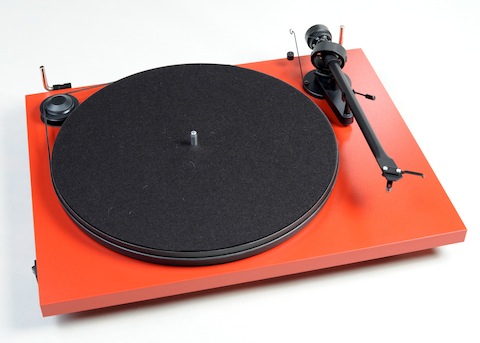 BITS AND PARTS: The plinth of the Essential II is made from medium density fibreboard. The platter equally looks to be made of MDF, although it is very well finished in matt black. A thin felt mat was supplied to support the LP record in play. Peeking below, the bearing sleeve looks to be made of bronze, but size-wise, it looks rather anorexic, but wholly in line with something needed to support the lightweight platter. I am made to understand that an acrylic platter is also available as an upgrade from the manufacturer, but the review sample was the everyday vanilla version.

The power switch is located on the left side of the plinth and the juice needed to turn the motor comes from a wall wart DC power supply, which is sourced from China. The tonearm is no longer a unipivot, but is a conventional affair with sapphire bearings and an aluminium tube. The cartridge – an Ortofon OM5E MM unit – came pre-mounted but I am not sure which mounting scheme had been used in the Essential II’s 8.6-inch arm. A dust cover, which is purposefully more solid than the one the obvious competition supplies with its entry-level offering, tops off the package. 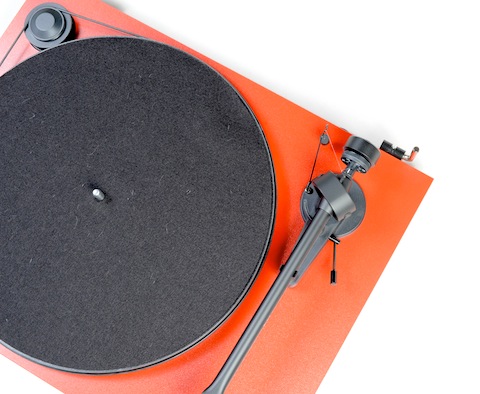 IN CONCERT: One of the first things I do when testing a turntable is check its speed accuracy and, unusually, I found the review sample to be running noticeably slow, at least based on the readings on the strobe disc which I use (from a Swiss turntable from the 1960s). I say “unusual’ as I do not recall encountering a Pro-Ject turntable which ever ran this noticeably slow before.

I managed to minimise the effect by cleaning the round-profile belt with some Pledge furniture polish and taking extra care when placing the belt round the motor pulley and outer periphery of the platter. However, I could not completely solve the problem. In spite of the mild speed deficiency, pitch wavering did not prove to be an obvious audible distraction during the listening tests.

So what does this low-end budget turntable bring to the, uh, table? I’ll start with the end in mind and tell you upfront that it proved to sound a whole lot better composed and engaging than I expected it to, and certainly better than how its predecessor sounded (not just relying on my recollection here, but from re-listening to the digitised files I created with the Essential USB when I had it in for review those few years ago (I believe it also had an inferior version of the Ortofon OM series cartridge back then, so yes, it’s a debatable point).

The infectious, crisp rhythmic quality which makes the vinyl LP medium such a joy to listen to was abundant in presence in the results from the Essential II. Tonal quality was good, the arm and Ortofon cartridge mating well to give a graceful, authentic sounding facsimile of acoustic string and percussion instruments, with voices also impressing. Dynamics were also fine, especially micro-dynamics, avoiding any sense of sterility even when playing at low volume levels, which even some high end DACs struggle to emulate. 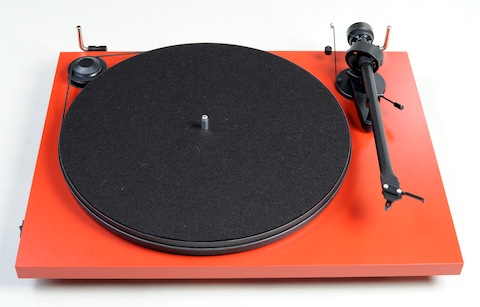 Surface noise during playback was low, and there was no obvious edginess to make one suspect that there might be any mis-tracking by the arm-cartridge combo. While I won’t claim that the sound was the smoothest around, for its price, it certainly was impressively free of vices in the upper frequencies, and the mids were also very good indeed, male vocals like Mario Lanza’s having both power and appropriate chest quality.

The size of the acoustic image created wasn’t the most expansive around but width and depth perspectives were good, and the performers were perceived as nicely occupying their own distinguishable space in the soundstage without any wavering.

The bass was fairly good and firm, having a nice punchy dynamic quality, but extension was only fair, although it still could convey a sense of physical presence of instruments like acoustic double bass if it is well recorded. I managed to get a much improved result in bass quality and kick by substituting the rather thin mat with a single layer of Blue Horizon’s Promat cork mat. In fact, this substitution also brought about a lower noise floor and improved mid band articulation and smoothness in the highs, while conveying more low-level information. Playing Falla’s Three Cornered Hat (Ansermet with L’Orchestre de la Suisse Romande) before and after the switch highlighted how much improvement could be wrought by a simple substitution of the mat alone, admittedly the Promat being a not cheap alternative!

APPLAUSE: Although I do miss the unique unipivot arm from its predecessor, I feel reasonably confident in saying this new version significantly betters the old (I still have some of the digitised files from when I reviewed the USB version of the first iteration of the Essential). Yes, I am using a different phono stage, and the analogue-digital conversion hardware in the ADL GT-40 is noticeably superior when I compare digitised files derived from each, but even without such comparison, I don’t recall feeling as compelled to listen to music when I had spent time with the previous version of the Essential.

BUT…: The speed accuracy issue aside, which seems likely to be peculiar to the review unit, there is very little to criticise about this overall package.

Yes, the elephant (or the 800lb gorilla, if you prefer) in the room can’t be ignored, so you do have to check out its Rega rival, if you can, but if you can’t, this here Pro-Ject is, in my view, still plenty entertaining and a legitimate on par rival in terms of overall value, even if no one can tell you which little nuances and pet likes and dislikes at the minutiae level would cause you to want to choose one over the other. 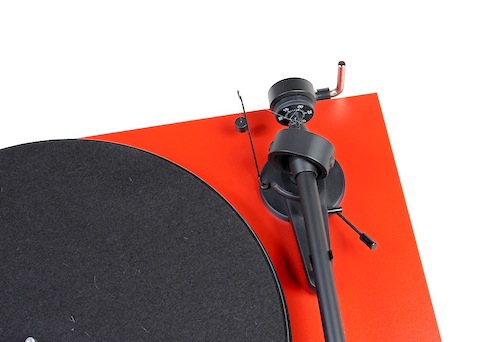 Also, I do feel if you can swing the extra cash, and you want to still stick with a Pro-Ject offering, the higher priced Pro-Ject Debut Carbon is probably a better overall buy and more likely to keep you from itching to upgrade for a longer period.

FINALE: Pro-Ject has done it again, presenting a product for which auditioning is compulsory if one is shopping at the price point. I dare say one has to be ultra-demanding (one should not lose sight of the price) if the overall package and its musical results here failed to entertain and didn’t make the individual feel his or her money had been well spent. 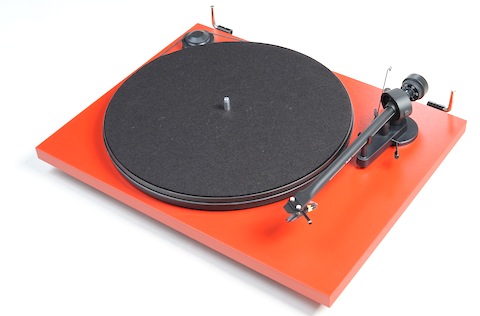