MOBILE hi-fi would have once been a oxymoron, the best audio gear being bulky monoliths to the temple of sound. Even now, certain concessions need be made – who wants to be seen in public with a fanny-pack crammed with amplifiers and wires feeding full-sized cans?

However, smartphones with larger storage capacities and highly efficient in-ear-phones mean listeners can now have better quality audio in a neat package.

The missing cog in the piece would be having a portable DAC to make the most of high-resolution files on said large capacity phones and MP3 players.

Quite a few industry players are racing to fill the field, with South Korean manufacturer Calyx Audio putting out one of the sleekest portable DAC-amplifier combos in the PaT.

So how much can be stuffed into a tiny domino of a device that weighs just 22g? 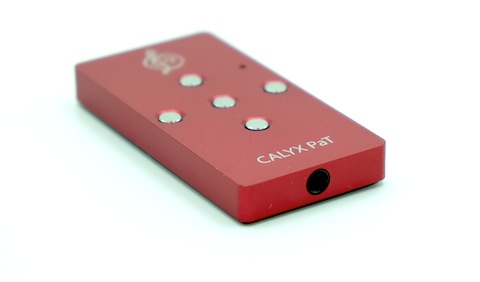 BITS AND PARTS: The PaT is a beautifully polished machine, having a brushed aluminium look that gives it flair without being too flashy. Calyx’s website states that it comes in gold, cyan and wine; though, simply put, it’s gold, light blue and red.

Smooth to the touch on its face, the PaT has a layer of padding on the back that makes it less slippery and leaves owners less worried about scratching the shiny device.

The overall build quality seems quite tough, and while this reviewer didn’t intentionally abuse it, the PaT does look like it could take a few knocks.

The cute domino also has five buttons: volume up and down, pause and play with the centre button, while the left and right buttons skip tracks backwards and forwards, respectively. Even cooler is the ability to scrobble a song by holding the skip button down.

As a former iPod classic owner, I felt it was a treat to be able to control my music via analogue controls. This saves listeners the trouble of having to unlock their phones to adjust things. 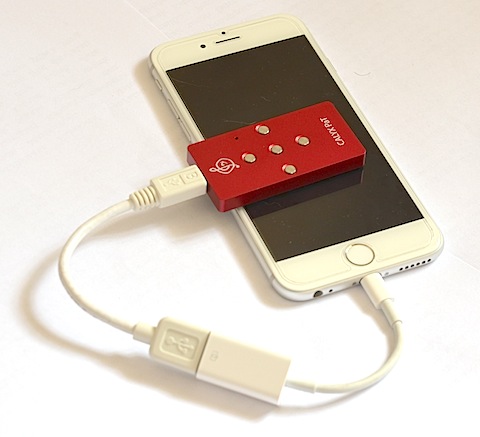 Interestingly, if users pause their music for too long, the PaT will turn off with a pop. Users will then have to unlock their phones and start playing from their music apps.

The buttons also work perfectly when paired to a Mac, from volume control to fast forwarding or pausing. Unfortunately, the PaT is not currently supported by Android devices and requires music to be adjusted through the phone’s native controls.

The lack of markings on the buttons means new owners should take a moment to learn the functions listed on the packaging. This gets especially confusing as the device is quite featureless, meaning you might forget which side is up or down. A trick is to remember that the Calyx logo is closest to the volume up button, while the single LED indicator is close to the skip forward button. 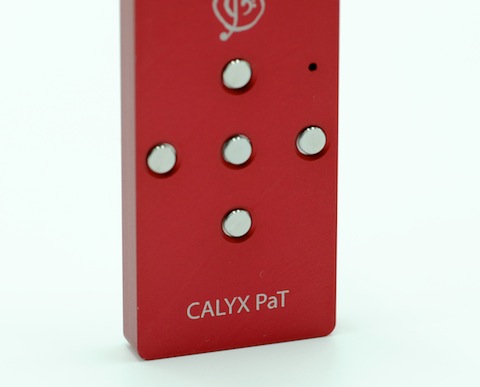 The simple packaging snugly holds the PaT in place and also provides a pair of wires, one USB to micro USB, and one male-to-male micro USB.

IN CONCERT: Running on the assumption that the PaT is meant as a portable unit, I paired it with an iPhone 6 and JVC Ha-fx700 woody earphones.

The PaT has a little hiss on low impedance earphones when no music is playing, but it’s not noticeable otherwise. In keeping things streamlined, it doesn’t come with a gain setting. So stick to slightly higher impedance cans than the usual for phone fare if the hiss annoys.

One does wonder how much amplification a device without its own power source can pack. The volume levels seem about the same with or without the PaT when paired with the JVC earphones and the Audio Technica M50 monitoring earphones.

Incredibly, the little amplifier drove the large (though highly efficient) Audio Technica AD900 open-back headphones well, even adding a bit of kick to the bass. Both the M50 and AD900 are rated at 38 ohms.

However, it does have its limits, struggling to push the Sennheiser HD650 headphones (rated at 300 ohms). Even at above 70% volume, the headphones sounded loud though sluggish on its bass and details.

However, considering the iPhone can only be loaded with music files capping out at CD quality with the Apple Lossless format, little is lost, given that the PaT doesn’t support ultra high-resolution audio. 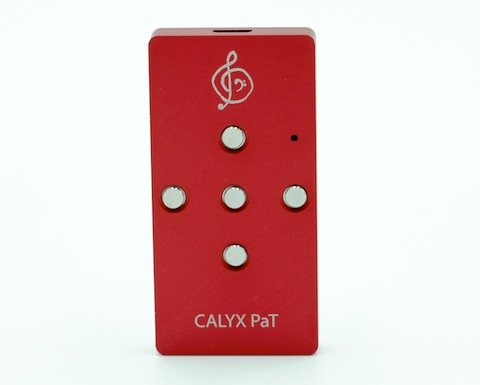 Listeners will need to splash for the higher capacity phones to make full use of the PaT’s better resolution. For this review, I loaded about 1,600 songs made up of a mix of Apple Lossless files and 320kbps MP3s. This took up about 16GB compared with compressing it into 256kpbs, which would usually take about 10GB.

While I have tried a few portable amps, this is the first mobile DAC I’ve used that could process digital output from an iPhone. And this is where the PaT shines.

Fed straight from an iPhone, the JVC Ha-fx700 performs admirably, getting deep tight bass and reproducing pleasant mids. However, this combo did have a tendency to drown out finer details.

The PaT retrieved greater detail, smoothing out the JVC’s sound. That said, it doesn’t exactly expand the soundstage. Imagine having a band with a few musicians playing too loudly, the PaT acts like a sound engineer ensuring a more even presentation.

To avoid bias, I played a random line-up of songs, with everything from contemporary folk to electronica, rock and some 1960s jazz.

With most songs, the PaT delivered pleasant new details. One of the songs that particularly struck me was Caribou’s Mars, a dense layer cake of percussion which consists of at least three percussion sources at any one point, and build-up with keyboard zings and voice samples. With the PaT, I could separate the layers and clearly heard the usually muted voice samples.

On my favourite tune from The Dave Brubeck Quartet’s kitschy 1964 Jazz Impressions of Japan, I could actually hear bassist Eugene Wright, even outside the quieter piano solo portion on Toki’s Theme.

The better resolution benefitted most indie outfits, providing exceptional detail for keyboard and multiple guitars on Belle and Sebastian’s crowded compositions and made Jenny Lewis’s Voyager album a bit more laidback by balancing the folksy guitars against the usually more upbeat drums.

Pairing the PaT with the more closely-priced Audio Technica M50, the better resolution did meet its limits in the headphone’s sound reproduction.

While it did dig up slightly better detail, the M50’s clinical sound simply couldn’t provide the bassy oomph or drum kick of the funner (and significantly more expensive) JVC earphones or squeeze out every inch of detail the way the AD900 could. 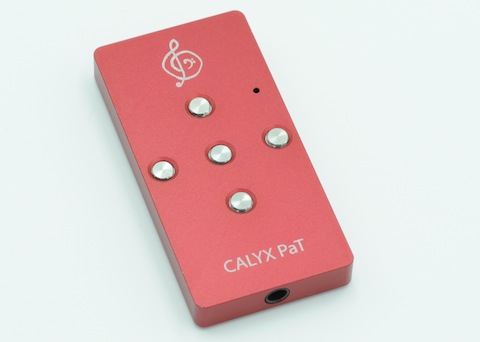 APPLAUSE: The DAC component of the Pat makes a world of difference for most phones that are usually designed for just “good enough” sound. Improvements to resolution are noticeable even on medium-end headphones, although amplification is not as significant.

BUT…: Unmarked buttons which are flush with the surface make the overall experience unintuitive and require users to actually look at what they’re pressing.

Although the DAP component works with Android devices, the external controls are not (yet) compatible.

A lightning to USB camera adapter (RM129/US$30) is necessary to connect to newer iPhones and iPads. This adds significant cost to this otherwise affordable device.

FINALE: This little domino packs a lot for something with its form factor and in that price range. The Calyx PaT is definitely useful for anyone who already has a decent set of headphones looking to ramp things up to the next level.

Since Quishin Tariq picked up his first Grado SR60 headphones and realised that “yes, music could sound so good” and “wow, supra-audio headphones are really uncomfortable”, this audio enthusiast has been on the journey to find the perfect pair of speakers to latch on to his head. Is ironically in a long-term relationship with a skull-crushing Sennheiser HD650.