THERE’S a new DAC in the Bryston line-up, the Canadian company’s highest resolution model to date. The BDA-3 is DSD-capable, a first for Bryston, and will decode up to DSD-256 via its asynchronous USB inputs, and accept SACD input via HDMI.

A generous 10 discreet inputs are provided, including four two-channel HDMI ones, two asynchronous USB, and one each balanced XLR, optical and coaxial. Balanced and single-ended analogue outputs are included, and also on board is Bryston’s network module for control via TCP/IP and RS-232 in modern smart home platforms.

“High performance and versatility were the benchmarks that we established for the BDA-3 when we began working on the design,” said Bryston CEO Chris Russell in a press statement.

“We wanted to create the ultimate DAC for traditional audiophiles as well as those enthusiasts using a computer-based system. The USB and HDMI interfaces deliver the extremely high bit rate that consumers demand while ensuring compatibility with high-performance computer-based music playback systems, and combination stereo and multi-channel theatre systems.

“With a vast array of available inputs, the BDA-3 is compatible with just about any digital source, enabling enthusiasts with older SACD or universal players to benefit from the performance of this advanced new DAC,” Russell added.

The BDA-3’s brand new chipset can decoded up to 32-bit/384 kHz PCM files and up to DSDx4 natively. Each format is processed in native resolution for bit-perfect signals all the way to the analogue outputs. Jitter is reduced to nearly negligible levels with Bryston’s ultra-precise re-clocking circuit.

The Bryston BDA-3 is priced at US$3,495 and will be in the stores of authorised dealers on Nov 1. 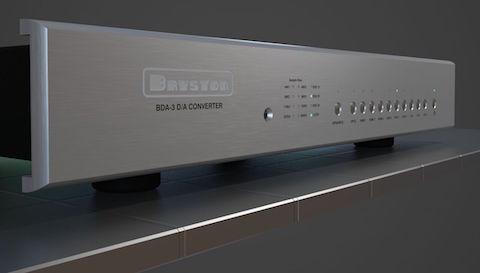