Triangle Titus – EZ on the ear

French loudspeaker manufacturer Triangle Electroacoustique does seem to refresh its product offerings more often than most European hi-fi manufacturers, but at any one time, there seems to be a model designated “Titus”, usually being the brand’s smallest or near-smallest bookshelf loudspeaker.

Indeed, that is the case with the Esprit Titus EZ, the latest to wear the moniker. The review samples came in superb gloss black and must surely be the smartest looking of all the Titus models so far.

There was no explicit “Fabrique en France” indicated anywhere on the carton, nor anywhere in the accompanying documentation. This is indicative that the Titus EZ may have been put together elsewhere in the world, if it should matter to one. But when one sees how immaculately constructed the little EZs look, one would hardly care – this is still a French beauty through and through… think a young Sophie Marceau in a stunning black sleeveless Cheongsam. 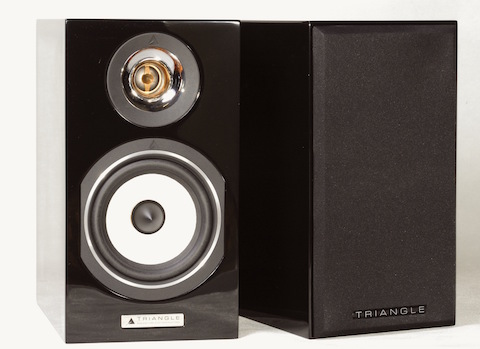 BITS AND PARTS: The Titus’ drivers certainly look distinctive against the cabinet they are bolted to (and no, you do not see nuts and or bolts anywhere on the face of the loudspeaker). There is Triangle’s by-now familiar 25mm titanium dome horn-loaded tweeter, fronted by a distinctive golden bullet-like phase plug but cosmetically, this latest one looks much shinier and glossier.

The 130mm woofer equally vies for attention, constructed of natural cellulose (paper to you and me, but apparently with some clever things done to it) in white, also with a bullet-like phase plug, this time in black which contrasts nicely with the cone material. 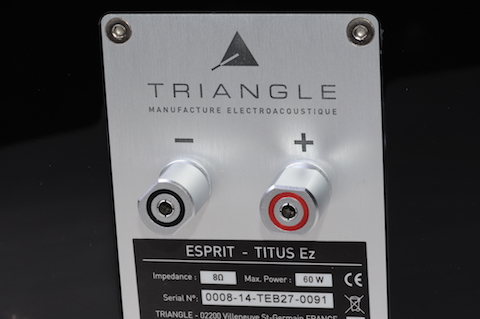 Peek round the back and be prepared to be further impressed. A superbly-finished pair of speaker terminals in brushed aluminium, which feels solid and confidence-inspiring, awaits. These cater for several cable connection choices including banana plugs. Unlike previous iterations, however, you do not get the option of bi-wiring or bi-amping.

Each Titus EZ measures 168 x 305 x 267mm (w/h/d) and weighs a little above 5.5kgs, and in terms of the numbers that appear to matter electrically, the manufacturer quotes a frequency range of 55Hz-22kHz, sensitivity at 90dB/W/m, and a nominal impedance of eight ohms, with the minimum being three ohms. 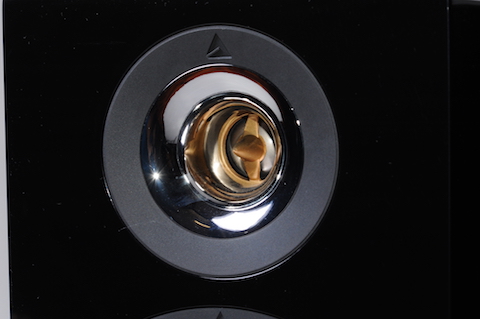 IN CONCERT: The Titus EZs need quite a bit of running in to be at their best but, off the bat, the brand’s virtues of lively and involving sound were clearly evident.

These EZs sounded bigger than their actual size! Their spatial impression was one of excellent depth perspective with good and precise image outlines – they displayed a good sense of the hall ambience and precise layering of the individual players in good small ensemble recordings, virtually an unrestricted view into the music.

They sounded fast and dynamic, and such transient speed could cause other speakers at this price point, and much more too, to sound plodding and lead-footed. Transient decay, too, was well-controlled, and here I think this is an improved aspect of today’s Triangle house sound as I perceive improvements here to better contain the hyperactive character earlier Triangles, like my early 1990s Ikotos, possess. Violin and cello overtones have better sparkle and sheen for a more authentic rendition of these instruments.

Triangles have always excelled at conveying low-level detail and the EZs did not disappoint – plenty here to behold. The midrange sounded cohesive and smooth, even with volumes way past moderate listening levels. Bass was fairly deep and resolute for their diminutive size, more tuneful and agile than being extended. Nevertheless, the EZs did quite well in reproduction of macro dynamics and power of orchestral and big band music. Big-speaker enthusiasts will, of course, immediately notice the missing octaves during orchestral crescendos. 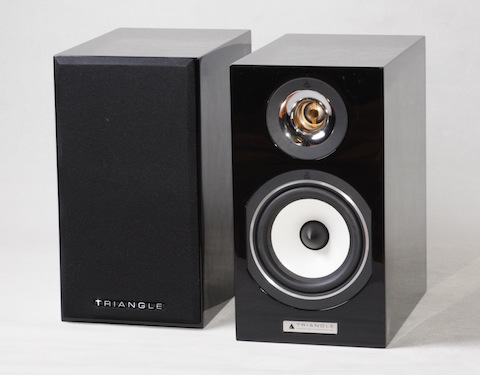 APPLAUSE: The EZs reveal a lot of musical information, having the ability to convey dynamic contrasts very well even when played at relatively low levels, a boon to apartment dwellers who can’t turn up the wick and let things rip. Ease of placement-wise, although rear ported, they are able to work close to rear walls, as long as not too far into the room corners.

BUT…: I think one still has to judge for one’s self the attractiveness, or otherwise, of the Titus EZ’s sonic demeanour. In terms of tonal believability, they do not, in my view, beat reference units like the Harbeth HL-P3ES or the evergreen LS3/5A. There are also more liquid-sounding small speakers around, if that is one’s sonic priority. And, as with all good small loudspeakers, bass performance is very much a case of quality over quantity.

FINALE: Matched well, Triangle Titus EZ will bring genre-agnostic musical enjoyment to a listener, especially in a small space, where they can transcend their limitations. If you’ve got quality gear which will not get embarrassed by their revealing nature, put them on your audition list. 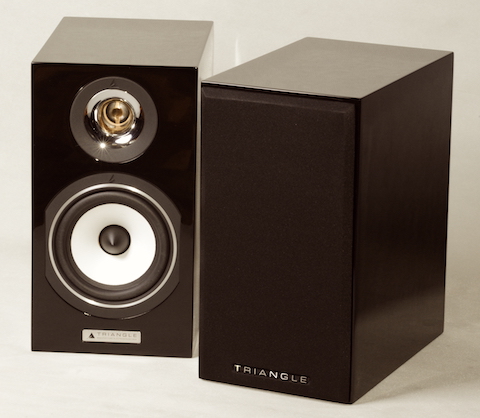