IT won’t do video, being a strictly no-compromise audio-only transport, but it does SACD and will allow you to output DSD resolution signals into an outboard DAC, which is really a big deal. The upcoming DirectStream Transport (DST) from PS Audio will be available only in October, but promises great things.

Here, PS Audio’s head honcho Paul McGowan gives us a sneak peek into what to expect from the DST, a natural partner for the DirectStream and DirectStream Junior DACs. Scroll down for the video. 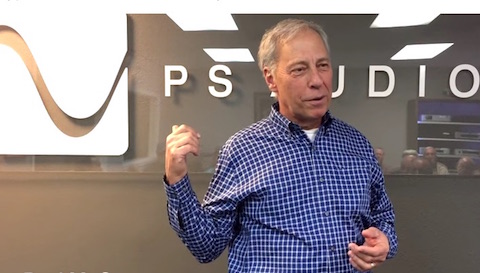 “DST has been in the works for quite some time. First proposed by DirectStream creator, Ted Smith, who had an idea of how we might build a transport perfect for DirectStream DAC, we partnered with Oppo. From that point forward, our chief engineer, Bob Stadtherr (inventor of the Digital Lens and Power Plants), has been working tirelessly on the new transport.

“Bob’s crafted a number of groundbreaking innovations into DST, and I won’t detail them here, but perhaps one of the most outstanding features will be its ability to play SACD directly into DirectStream and DirectStream Junior DACs – something previously impossible. Once connected over I2S, pure DSD from any SACD will fill your room with sound that’s drop dead remarkable. As I have said in the past, if you haven’t had a chance to hear the SACD layer trapped by encryption on your SACDs, and frankly few have, then you really don’t have a clue what’s on them.

“When you play an SACD through a DAC, you hear only the CD layer. Because of copyright laws, transports aren’t legally permitted to output digital DSD streams from SACD except through an encrypted HDMI connection into a Sony-designed chip. The new DST honours the original Sony copyright rules through an encrypted handshake with any DirectStream DAC, but now you’ll be able to hear the magic of DSD through a Ted Smith designed DAC. Finally! My 50 or so SACDs have found their true purpose in life.

“Oh, and DST also outputs multi-channel as well as two-channel. No, it doesn’t do video – this is designed from the ground up as a pure, no compromise, audio transport. It’s also a universal player, so DVD discs with 24/192 or DSF files, even BluRay all play nice with the new transport.”

Watch McGowan’s presentation on this to the Colorado Audio Society.