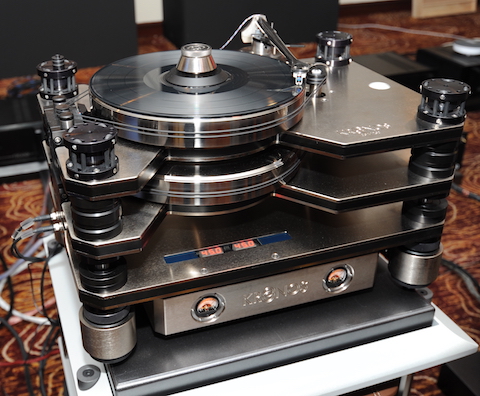 ANALOGUE, not surprisingly, refused to keep a low profile at this year’s Kuala Lumpur International AV (KLIAV) Show, in its 16th year at the J.W. Marriott (July 22-24). It helped no end that two names currently a-buzzing in the turntable industry had their principals present at the show – Kronos and VPI. Yes, there was streaming media, and you could spot the occasional high-end CD player… but for funky looks, cutting-edge technology and the wow factor… turntables ruled the roost again.

Our motley crew did its annual walkabout over the three days of the event and came away with these impressions.

J LOH: THE nuttiest moment I experienced at the show this year was hearing Korean pop star Psy’s viral hit Gangnam Style blasting at ear-splitting volumes via the RM10,000 Devialet Phantom. Not exactly the standard sultry vocal fare typically heard at shows of this ilk, but there was a certain fascination looking at those dual side-mounted woofers pumping in and out enthusiastically to the beat of the music.

Personally, what draws me to hi-fi shows is novelty – looking at gear I can’t afford or to observe current and developing trends in the market – and the Devialet exhibit fit this criteria to a T. While there are always great-sounding systems on show, I accept and understand the fact that this isn’t easy to achieve in a typical hotel room. So kudos to those who managed to do a good job this year.

Speaking of trends, the resurgence of vinyl doesn’t look like slowing down anytime soon. Encouragingly (as a vinyl aficionado), I noticed most of the megabuck, super-expensive systems were using turntables as sources. And there were turntables galore – you would find one in almost every other room that was displaying a hi-fi system, and at all price ranges too! 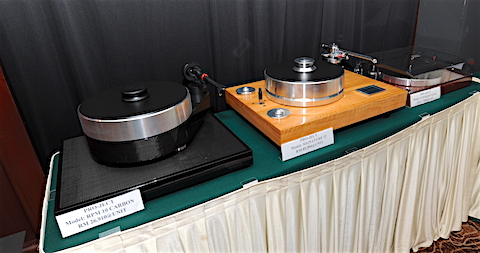 And it wasn’t just about the hardware – there were loads of records on sale by a good number of vendors. I managed to pick up a sealed, US-pressed Best of the James Gang LP for a mere RM30! But this was the exception rather than the rule, and most were going at typical market prices.

Unfortunately, I didn’t have much time to spend at the show, but there were a few exhibits I got to hear that impressed me – the Kronos Pro, Naim Statement and Avant Garde Duo systems, among them.

I’ll definitely be back again next year, and will ensure I’ll have more time to spend… and money to blow on vinyl as well!

LIM JUAN: The J.W. Marriott Hotel in the July-August period has become a pilgrimage destination for local hi-fi and AV buffs. I didn’t really have any reason to go this year, apart from force of habit, and a desire to support the show (audiophiles in Malaysia would be all the poorer without it).

There were many rooms which had interesting drool-inducing equipment but for my take and impressions, I focus on those which actually had music playing at the limited time that I was there. No matter how hi the fi, systems which had bird chirps, cowbells and percussion knick-knacks and the like did not stick in my mind. 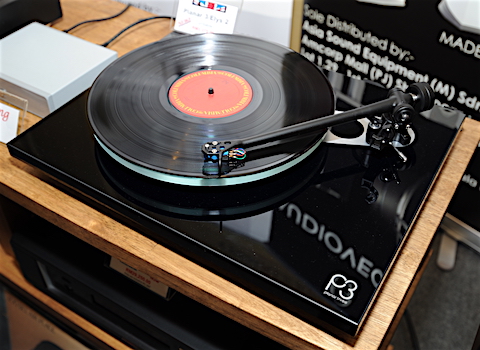 Starting from the lowest floor, I was trying to fathom why the guys at Asia Sound were trying to blow the eardrums off their visitors with the newest Rega Planar 3 coupled to a Rogue Audio phono stage/Rega Osiris amp/Audiovector speaker set-up. Knowing I had many more rooms to cover, I quickly beat it from there and made my way into the CMY Room, where I found the Naim Statement amps driving the huge Dynaudio Evidence Temptation speakers to be sounding better than a similar set up did the previous year. The potential of the system showed, even if, like most of the expensive set-ups, it was unlikely to be performing to what it was capable of. Show conditions, and all that. And then, they turned the wick up… and up… .

Exiting the lifts to the eighth floor, I made my way to the Audio Note room, always an oasis of sanity when it comes to playing music is concerned. The set-up of Audio Note TT2 Deluxe-Arm 3 with M2 pre and Quest power amps into AN-E’s sounded rather fine in probably the most unconventional set up of the show in terms of how the room was laid out and speakers positioned. There were several rooms with Audio Note gear this year, but this was the only all-Audio Note one. 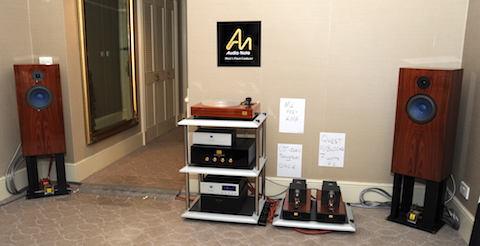 Looking altogether more glamorous were the Marten Bird 2s being driven by Vitus Audio amps in the Swedish Statement room – they sounded dynamic and of faithful tone and timbre playing a Vanessa Fernandez track (who, with the late Eva Cassidy, seems to have become “it’ girls to have playing at the show, at least for the English music oriented audiophiles. No one gets anywhere near Choi Kum (蔡琴）for the Chinese music oriented set).

One of my favourites of the show, for its simplicity and rather more affordable price, was the system consisting of Roksan K3 components driving the well-respected ATC SCM11 v2s assembled in the Hi-Way Laser room. The show price of the ATCs almost had me whipping out my credit card. I may still yet! And these Roksan components are ones to watch.

Sometimes, as a hi-fi dealer exhibiting at a show like this, you face a “damned if you do, damned if you don’t” proposition. Cramming large loudspeakers like the Rosso Fiorentino Florentia into one of the smaller rooms may not let you get the best sonics, but the paying public appreciates the efforts of dealers to make manufacturers’ flagship products available to view and listen.

Gear like this doesn’t normally sit in stock, so while it may not have performed to potential, the beautiful model from RF showed enough at the end of Accustic Arts electronics and source to indicate it is capable of vying for a share of the big Wilson Audio, Focal, Sonus Faber, Magico etc dominated affluent audiophile market. And with a product logo like theirs, Roger Federer should take notice of them if shopping for a pair of speakers for his home!

I was rather disappointed that the tube amps in the HiFi Creations room had suffered a fault at the time I popped in to listen. When you have such highly reputed gear like the Kronos Pro turntable and local participation in the form of ten (yes, 10) Frank Acoustic Power Banks and Ocean Five loudspeakers, anticipation surely would run high. What they could play (at reduced volumes to minimise the distortion from the distraught amps) sounded promising for such a level of system.

That’s it for me, this year. 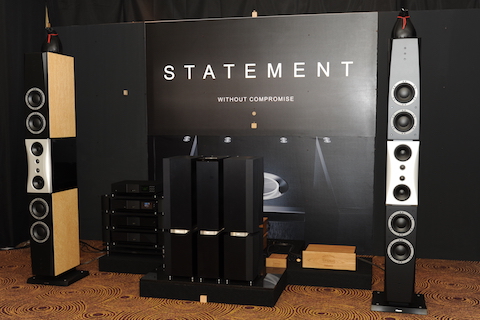 FOO MARN HING: With the continuous revival in vinyl playback, it was no surprise to find more turntables on show. It was also great to see a few rooms actively demonstrating turntables rather than static displays as was the norm in the past few shows.

Firstly, at the budget level there were Regas and Pro-Jects, both on display and actively playing. Of note was the spanking new Rega Planar 3 looking great in gloss black. The sound was quite impressive with good strong bass output. 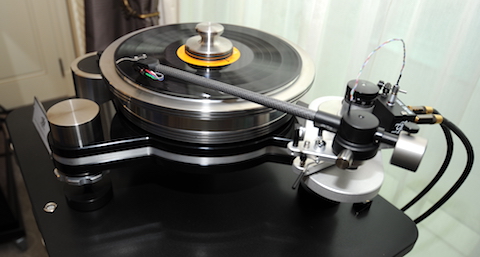 VPI was out in full force in the Centre Circle Audio room. On play was the top-line VPI Avenger holding the audience rapt with a highly detailed presentation. On hand to explain things was Mat Weisfeld, son of founder Harry.

CMY was also demonstrating its line of Clearaudio turntables. On active duty was the Clearaudio Innovation, which sang nicely. And an old stalwart was back with three levels of the Linn Sondek LP12 being demoed. Quite a change from previous years static displays.

Finally, Louise Desjardins was back with his ultimate statement, the Kronos Pro, with his new super capacitor power supply. The revolutionary counter-rotating double-platter Kronos Pro was playing back LPs with utmost smoothness and musicality. Needless to say, the partnering Absolare electronics helped significantly. A must-stop for anyone wanting to hear the highest possible level of vinyl reproduction. Naturally, with price tags that made me feel I was at a property expo and not a hi-fi show!

KEN Y: For every KLIAV show that I have been to, I always chose Friday, the first day. Less crowded, and more time to listen to set-ups and chat with the dealers. But unlike previous years, I decided to focus on the high-end set-ups, especially with grand speakers.

Among the set-ups that blew me away was the tall Dynaudio Evidence Temptation speakers driven by Naim Statement amplification in the CMY room. Unlike the typical Naim sound which focusses on “PRAT”, the sound emanating from this system was pure bliss. 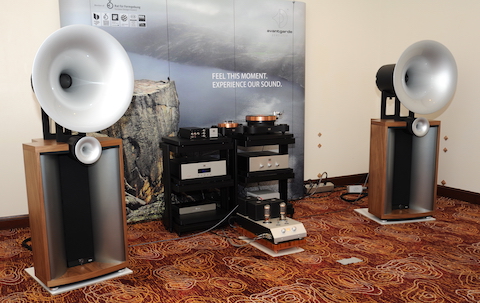 In my opinion, the HiFi Creations’ room was the top sounding room for this year’s show. The Kronos turntable and Absolare amplifiers driving Ocean Audio’s Pacific Reference four-piece speakers were a sight to behold. Soundstage was deep as it was wide. The system handled all types of music with aplomb.

This year’s show was an ear-opening experience for me. Yeah, gear is costing more due to our weaker ringgit but the sounds from the latest keep getting better.

EL HEFE: The show maintained a similar modest appearance as in previous years, with most of the exhibitors the usual people in the local industry. Nevertheless, this year’s show had its own spark as there were a number of advanced technologies being showcased plus a strong commitment shown by principles of some famous brands.

On the AV side, there was a big expectation on a real 4K image in a home theatre set-up. Many AV enthusiasts were tad disappointed as there was still no firm launch date of the 4K UHD BD player. There was a unit on demo at the Samsung hall along side its newly-launched SUHD TV. The other option was the AV Design room where the same 4K UHD BD player was fed into a top flight JVC projector onto a large curved screen. Visitors were impressed with what 4K UHD image can provide but the question on the launch date remains a mystery. 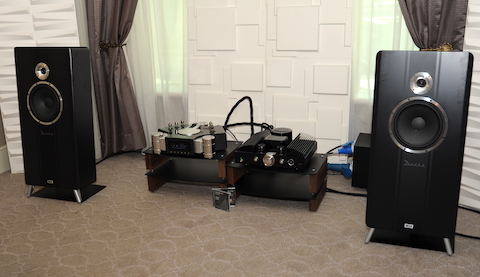 Vinyl still seemed to be the main flavour for two-channel hi-fi, especially the high-end set ups, with the owners of major brands like Kronos and VPI putting in an appearance. These were definitely among the best performers seen in the past few years.

On the mid and lower end set-up, digital streaming garnered a wider interest and there was an abundance of options from the likes of Bluesound, Cocktail Audio, Linn and Bryston. With some the exhibitors managing to tweak their room acoustics properly, the digital medium still remains competitive in the race to reach the ultimate listening pleasure.

The usual bargain section for LPs, CDs and BDs were as popular as ever. With some really irresistible bargains, there was constant traffic at these stalls and rooms.

There were also a few returning brands like Arcam and Musical Fidelity, showcasing their AV and hi-fi respectively. It was good to see that these brands still have some big followers as visitors really enjoyed their demo sessions.

Given this year’s tag line of cutting-edge technology, I personally really enjoyed seeing a few debuts, such as Absolare for amplification, the Heco Direkt speakers, Kronos new power supply for its Pro model and SVS elevation speakers, among others.