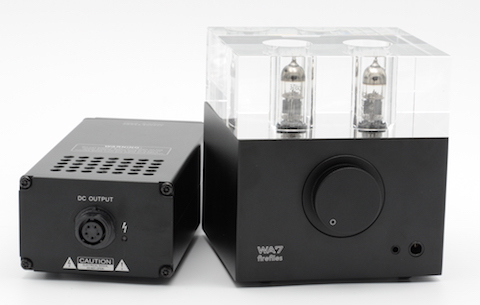 + A highly enjoyable and musical DAC/amp combo. Huge power and detail headroom.
– Weaknesses? Not much save for the lack of DSD support.

WOO Audio’s Fireflies is a tube headphone amplifier with a built-in 24-bit/384kHz DAC. Eschewing semiconductors in the amplification chain, this pure tube design is based off the venerable 6C45 triode in a class-A, single-ended topology with handmade nickel alloy core transformer coupled outputs. The DAC section is via standard USB 2.0 interface operating in asynchronous mode. 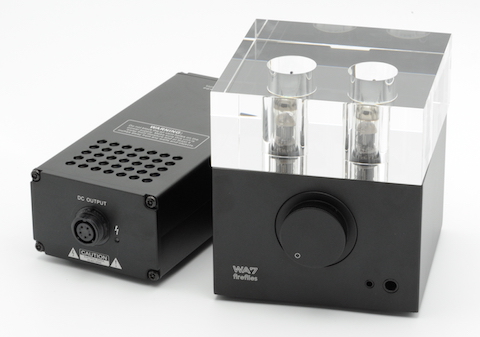 SETTING UP
Setting up the Fireflies is a breeze. Attach the aluminium enclosed power supply module via the umbilical cable, insert the pair of matched 6c45 tubes and digital feed via RCA or USB options, plug in headphone of choice and you are good to go. To cap it off, a substantial block of glass sits on top of the amp completing the cuboid form, providing solid protection to the hot tubes from prying hands…and vice versa.

Despite its compact form factor, do take heed of the amp’s 3.8kg heft. As build goes, the Fireflies are rock solid with a robustly constructed all anodised aluminium enclosure that has no visible fasteners.

The front panel sports an oh-so-silky yet solid-to-the-feel volume knob and a pair of outputs for 3.5mm or 6.35mm headphone jacks. To the rear, find a toggle switch for high and low impedance outputs. Mind, the RCA connectors can be used either as RCA inputs or USB DAC outputs, so the Fireflies can do double duty either as a headphone amp or as a DAC pre. The attendant USB driver can be downloaded from Woo Audio’s site.

A word to the wise, do allow the amp, tubes et all to run in for a spell. I found the sound to be a lot more relaxed after letting the amp run on repeated playback for a day. 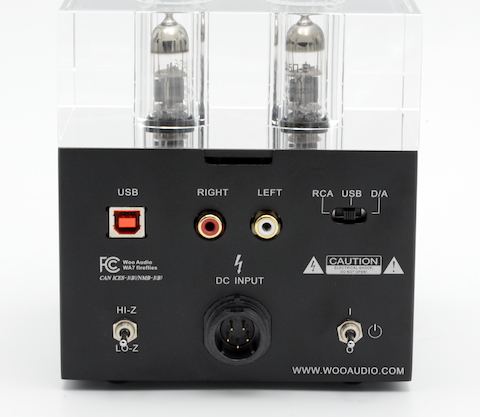 LISTENING
Before listening to the Fireflies, do this – power the amp up, turn off the lights in a darkened room and you’ll see why this amp is so aptly named. The protective glass block catches the warm light of the glowing tubes just so that you can’t but bask in its aesthetic radiance.

The sound of the Fireflies is entirely engaging, a veritable pitch black backdrop from which music emerges as fine strokes of iridescent colour with an organic neutrality that is in the same turn both planted and nimble. I found myself poring through my hi-res and lossless music files for more recordings into the wee hours of the morning on more than one instance. 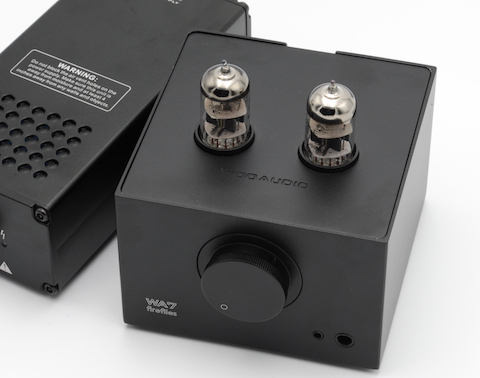 The Fireflies push out a prodigious one watt @ 32 ohms, which was way more juice than my collection of cans required but which really came into its own with the Hifiman HE500. Highly detailed but not exactly the easiest of headphones to drive, the Fireflies were a magical pairing with the planar magnetic HE500.

The Fireflies’ ESS SABRE ES9018K2M Reference DAC’s ability to delve into the recording and flesh out detail with the HE500 had me listening to Doug MacLeod’s wonderfully recorded There’s A Time (24/176 HDtracks Reference Recordings) over and over again. Vocals and instrumental detail were rendered in vivid detail within a deep airy soundstage. 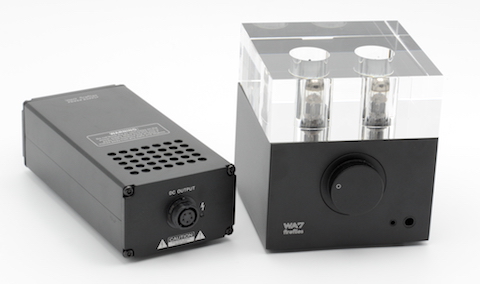 To be fair, this amp rocks and then some. On Pearl Jam’s Ten (24/88 HDtracks), guitar riffs and bass lines were laid down with vise-like authority with little if any smear. A word of caution though as the Fireflies delivers so much distortion free power, the usual clues to take one’s foot off the volume pedal aren’t immediately evident, so do mind the volume levels. I got a quick and stern reminder from my wife on this point while I was listening to Should I Stay Or Should I Go on The Clash’s Combat Rock (24/96 HDtracks) on the open back HE500s.

THE LAST WORD
The Woo Audio WA7 Fireflies headamp is an ideal desktop USB DAC amp that could form the bedrock for a high-quality computer-based music system. Highly recommended.